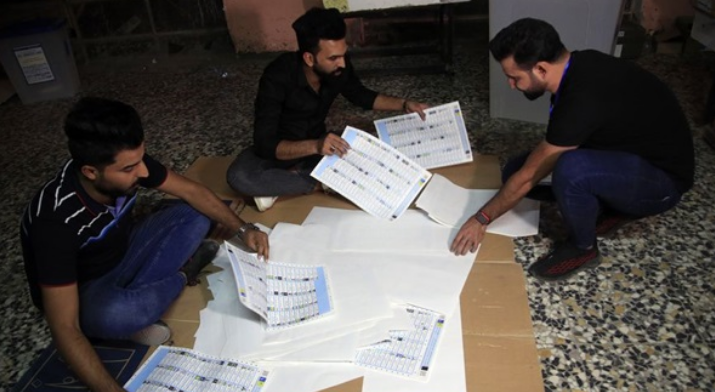 At the polls: Iraqis announce their rejection of Iranian presence

On October 10, Iraqi Prime Minister Mustafa al-Kadhimi announced the completion of the early parliamentary elections in the country, in which a number of different currents competed, most notably the Sadrist movement led by Shiite cleric Muqtada al-Sadr, which won a majority of 73 of the 329 parliamentary seats, according to preliminary results, while the Fatah Alliance, an alliance of Shiite factions affiliated with the Popular Mobilization Forces (PMF) and loyal to Iran, recorded a significant decline in the elections after it was second in the outgoing parliament, which may constitute a predicament for the Iranian regime.

Dr. Masoud Ibrahim Hassan, an academic researcher specializing in Iranian affairs, said that the success of the Iraqi people, who launched a popular uprising against the government of former Prime Minister Adel Abdul Mahdi in 2019 and brought in Kadhimi and demanded early parliamentary elections, was dependent on the consensus of the political forces in the election arena, which was different from the political forces loyal to Iran in the region.

Hassan pointed out in an exclusive statement to the Reference that Tehran had placed great hopes on the Fatah Alliance, which rejects the American presence in Iraq and implements the mullahs’ agenda in the Iraqi arena. Iran has always supported it until it obtained the parliamentary majority in the last elections. However, the Iraqi people’s hatred of this current is what prompted the Iraqis to demand early elections.

He noted that Tehran saw the recent Iraqi parliamentary elections as important for its presence in the region, because Iraq is the backyard of Iranian activities in the region and through Iraq it can circumvent US sanctions by using Iraqi ships to smuggle oil.

The Iranian Revolutionary Guards’ control of the Iraqi borders facilitates many smuggling operations, as Iraq is Iran’s savior out of its economic crisis.

Hassan added that the Iranian regime had hoped that the Fatah Alliance would obtain a majority in the Iraqi parliament, because this would have constituted a strong point for the Iranian presence in Iraq in the future and Tehran’s continued dominance of the country. Therefore, on the eve of the Iraqi elections, the commander of the Iranian Revolutionary Guards and some other leaders visited to coordinate with the Fatah Alliance on the elections.

There is a state of popular Iraqi anger towards the Iranian presence in Iraq, exacerbated by the popular protests that erupted in October 2019, during which the demonstrators expressed their anger at the mullah regime’s control of the political decision-making process in the country, in addition to the repression of the Shiite factions loyal to Iran. These protests exacerbated the anger, which led to Tehran losing part of its popular base dramatically, and as a result, the currents loyal to it failed to win seats in the parliament.

Therefore, the preliminary results announced by the Iraqi Electoral Commission constituted a concern for the mullah regime, which prompted Quds Force commander Esmail Ghaani to suddenly visit Baghdad hours before the Iraqi commission announced the results of the general vote.

Observers believe that this visit came in order to influence the nature of the orientation of the winning Iraqi blocs and forces in the compass of future alliances, during which Ghaani will meet, according to well-informed local sources, political leaders from the Fatah Alliance, the State of Law Coalition and other pro-Iranian factions.