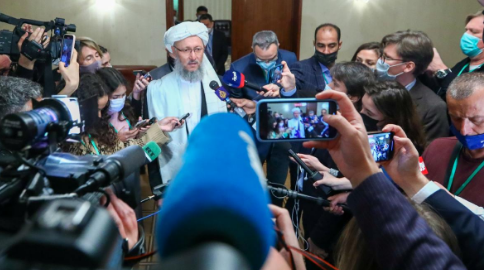 Russia raises alarm over Isis and al-Qaeda in Afghanistan

Russia has given warning that Islamic State and al-Qaeda could exploit the instability of Taliban-ruled Afghanistan to regroup and it called for international aid efforts to stave off a humanitarian crisis.

The Taliban were in Moscow yesterday for high-level talks with Russian officials that also involved China, Iran, India and Pakistan. Although Russia has previously hosted Taliban officials, this was the first time they had visited Moscow since seizing power in August.

Sergey Lavrov, Russia’s foreign minister, called on the international community to mobilise its resources to provide Afghanistan with “effective financial, economic and humanitarian assistance”, adding that Moscow would dispatch a new shipment of aid to the “friendly people of Afghanistan” in the coming days. This month the EU pledged an emergency humanitarian aid package worth €1 billion (£845 million) for Afghanistan.

Lavrov, 71, also lauded what he said were the Taliban’s efforts to try to stabilise security in Afghanistan but he cautioned that “numerous terrorist groups”, including Isis and al-Qaeda, were exploiting economic and social instability. “They are again trying to raise their heads,” he said.

President Putin said last week that about 2,000 Isis fighters were gathered on Afghanistan’s northern border with Tajikistan and were planning to infiltrate central Asian states and Russian regions by disguising themselves as refugees. The CSTO, a Moscow-led collective security alliance made up of former Soviet states, will hold military exercises on Tajikistan’s porous border with Afghanistan this week.

Moscow has been seeking to position itself as a key player on Afghanistan since America’s abrupt withdrawal from the country in August and has said that there is “no alternative” to Taliban rule. However, it has also said that it will not recognise the Taliban, who are outlawed in Russia as a terrorist organisation, until the organisation respects human rights and forms a government that represents all of Afghanistan’s 38 million people. The Taliban’s interim government contains no women and is dominated by hardliners from the Pashtun ethnic group.

Zamir Kabulov, Putin’s special envoy on Afghanistan, said that it was inevitable that Russia and other countries would eventually establish fully-fledged relations with the Taliban. “This moment will certainly arrive one day,” he said. “But it will only come, and this was said to the Afghan delegation, when they begin to fulfil the majority of the expectations of the international community, which concern both human rights and issues of inclusiveness.”

Abdul Salam Hanafi, the Taliban’s deputy prime minister, appeared to dismiss at least some of those terms, saying: “The government in Afghanistan is already inclusive.” Hanafi, 53, pledged that the Taliban would ensure that Afghan territory was not used to launch attacks on neighbouring countries.

Nikolai Patrushev, the head of Russia’s national security council, accused Washington last week of attempting to impose “alien values” on the Afghan people and then abandoning them to their fate after the collapse of its “puppet regime” in Kabul.

The United States has previously participated in talks with the Taliban in Moscow but it pulled out of today’s event after Washington’s envoy to Afghanistan resigned. The US state department said, however, that the talks were effective and that it hoped to take part in future meetings in Moscow.