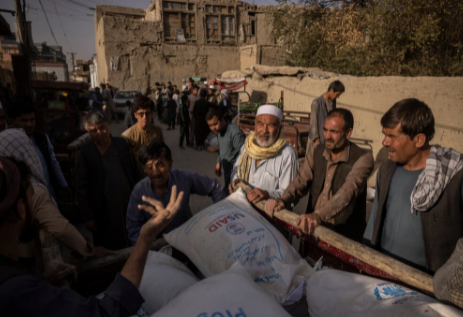 World leaders met virtually on Tuesday to discuss ways of preventing an economic and humanitarian disaster in Afghanistan, but the Biden administration maintained a cautious stance toward providing more support to the Taliban-ruled country.

The European Union pledged $1 billion euros, or $1.15 billion, in aid to Afghanistan and to neighboring countries, as Group of 20 leaders separately affirmed their support for human rights and stability in the country.

“We must do all we can to avert a major humanitarian and socio-economic collapse in Afghanistan,” Ursula von der Leyen, the president of the European Commission, said in a statement. “We need to do it fast.”

After two meetings with Taliban officials over the past few days, however, the Biden administration did not announce any new American aid for the country as it navigates its approach to an Afghan government run by a group that battled the United States for nearly 20 years.

Experts said the E.U. funding, some of which had already been pledged last month, was at best a temporary solution to the enormous need in Afghanistan, a nation of 30 million whose financial system is on the verge of collapse. Most international aid to the country has been cut off since mid-August, when the Afghan government collapsed and the Taliban took power.

The Group of 20 meeting produced a declaration of mostly familiar principles, including the need to protect the rights of Afghan women and for the Taliban to allow humanitarian aid to flow unimpeded. President Biden participated in the virtual gathering, but some key leaders, including President Vladimir V. Putin of Russia and President Xi Jinping of China, did not.

The Biden administration affirmed support for “using diplomatic, humanitarian, and economic means” to help the Afghan people — but only after it first stressed that leaders at the gathering discussed the need to maintain a “laser focus” on counterterrorism and the safe passage from the country of foreign nationals and Afghans eligible for asylum in the United States.

Officials said that terrorism and safe passage were the main topics of discussion in a separate pair of meetings U.S. officials held with Taliban representatives in Doha, Qatar, over the past several days — the first of their kind since the Taliban formed a government last month. Larger and far more fraught decisions, such as whether to grant the Taliban diplomatic recognition, or unfreeze billions of dollars of Afghan assets, are not imminent, officials said.

In a briefing for reporters on Tuesday, the State Department’s spokesman, Ned Price, said that denying a haven to terrorist groups like Al Qaeda and ensuring a way out of the country for endangered people were “core national interests,” a label he did not apply to assistance for the Afghan people.

Further social chaos could fuel radicalism within Afghanistan’s borders and set off refugee flows at a time when Europe is still grappling with a migrant surge over the past decade that has destabilized governments and fueled far-right nationalism.

Mr. Price noted that the United States had approved nearly $64 million in humanitarian aid for the country in recent weeks, and that a representative from the U.S. Agency for International Development joined a weekend session that U.S. officials held with the Taliban.

Decisions with more sweeping implications — including whether to officially recognize the new Afghan government, and the critical question of whether to unfreeze $9.5 billion in Afghan national assets held by the Federal Reserve — would depend on how the Taliban chooses to govern the country, Mr. Price said.

Laurel Miller, the director of the Asia Program for the International Crisis Group, a nonprofit organization focused on deadly conflicts, said the cold facts of Afghanistan’s needs were “in direct conflict with the politics of the situation.”

“How can the Biden administration release those assets without being accused of giving billions of dollars to the Taliban?” she said.

Ms. Miller said that humanitarian aid would help in the near-term but could only do so much to prop up a country facing the prospect of economic collapse.

A shattered banking and payment system could also severely complicate the distribution of foreign aid. In a statement, Necephor Mghendi, the head of the Afghanistan delegation of the International Federation of Red Cross and Red Crescent Societies, warned of “a dire shortfall of cash” that could lead essential health care and other services “to grind to a halt.”

A senior administration official said that the United States was in no rush to unfreeze the Afghan assets, or to provide diplomatic recognition — reiterating the U.S. position that the Taliban must show they are governing inclusively, protecting human rights, preventing terrorist activity and ensuring freedom of movement from the country.

The official also stressed that releasing the funds would not necessarily be the key to averting a humanitarian catastrophe, given that the Taliban had yet to prove to the international community they could responsibly distribute and manage the funds.

Adela Raz, who was the previous Afghan government’s ambassador to Washington before the Taliban took power, and who continues to work from the country’s embassy without guidance from the Taliban, acknowledged that the United States and other governments faced “very tough” decisions about how to balance pressure on the Taliban with support for regular Afghans.

“The Afghan people should not be taken hostage,” Ms. Raz said in an interview.

But she said “there is not much of a change” so far from the Taliban government that ruled Afghanistan in the 1990s, when it denied basic rights and education to Afghan girls and women, and enforced the law with amputations and public executions.

For the international community, she said, assisting the Afghan people without supporting the Taliban presented a “unique” challenge. “We have never seen something like this before,” she said.

In addition to the Group of 20 meeting, officials from the United States and several European nations met with Taliban representatives in Doha in what the European Union described as “an informal exchange at a technical level” that did not constitute recognition of the Taliban as a legitimate government.

That position is similar to the one taken by the Biden administration, which refers to the all-male, generally hard-line Taliban leaders running the country as a “caretaker government,” a phrase which implies hope — one many analysts call distant — for a more inclusive government to come.

The E.U. pledge includes 300 million euros for humanitarian aid already announced, along with another 250 million to provide additional support to those “in urgent need, notably in the field of health,” Ms. von der Leyen said.

The money will go to international organizations already working in Afghanistan, as has recent U.S. aid.

The new Taliban government has generally cooperated with U.N. aid agencies, António Guterres, the U.N. secretary general, said on Tuesday, and has “progressively granted access to the areas requested and provided security when needed.”

Although the Taliban kidnapped and murdered foreign aid workers during their two-decade insurgency, they have a keen interest in placating the international community now that they are in power, as they hope to win diplomatic recognition and direct economic support to rebuild an impoverished country gutted by decades of war.

Prime Minister Mario Draghi of Italy, who hosted the Group of 20 meeting, called it “the first multilateral response to the Afghan crisis.” Speaking at a news conference at the end of the meeting, he added, “Multilateralism is returning.”

Mr. Draghi said the leaders’ discussions had moved beyond blame for the fall of Afghanistan’s capital, Kabul, an issue he said dominated last month’s U.N. General Assembly gathering, to the question of humanitarian relief. “At least this one allows us to overcome the inevitable differences in points of view,” he said.

Mr. Draghi said that providing aid required talking to — but not formally recognizing — the Taliban.

“There is no alternative to having contacts with them,” he said. “They are essential for this response to be effective.”

The week that could unravel the global oil market