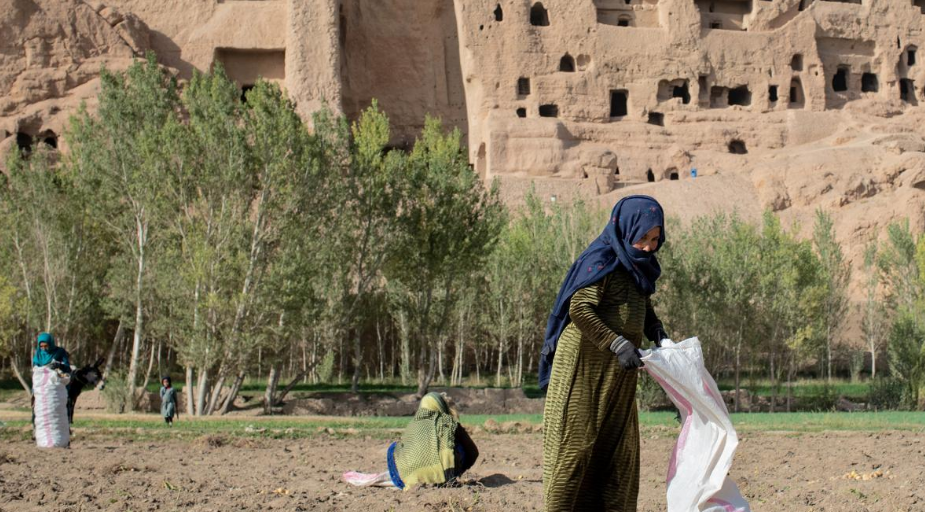 High up in the Hindu Kush, 100 miles north of Kabul, Bamiyan was a showpiece for the new Afghanistan.

It was also the place where the Taliban had sent their most powerful message to the world. In March 2001 they blew up two giant sandstone Buddhas that had overlooked the valley for more than 1,500 years — an act of wanton destruction denounced by Unesco as “a crime against culture”.

“They tried to erase our history and our identity,” said Baryali Amiri, a civil society activist who was 18 at the time and recalls the terror as stones rained down and windows shattered with the blast. “They also tried to erase us.”

No population was more persecuted under the previous Taliban regime than the local Hazara Shias, considered infidels by the Taliban who are mostly Pashtuns and hard-line Sunnis.

Today, as the Taliban again roam Bamiyan bazaar, cruising through the valley in pickups with white flags on top and taking selfies in front of the Buddha-shaped cavities in the cliffs, it is a place of fear.

The journey there from the capital has become safer since the Taliban takeover, driving along what used to be known as the “death road” through Wardak, a Taliban stronghold where many villages lie in ruins as a result of US airstrikes and Taliban mines.

Winding up through a mountain pass to arrive through the Taliban-manned gate, I find a very different Bamiyan from my last visit almost two years ago when it hummed with life and was even attracting foreign tourists.

Now the hotels are closed and so is the airport. Women are almost nowhere to be seen and behind closed doors female cyclists are destroying beloved bikes and families are hiding their daughters.

In a secret location, I meet Masuma, 31, who worked as an activist running a foreign-funded programme for female empowerment.

She is seeing the town for the first time since the Taliban takeover and looks dazed at the sudden collapse of her world. “Bamiyan was the province where women had the loudest voice but now we are silenced,” she said. “Even children are terrified. My seven-year-old daughter asks, ‘Will the Taliban kill me if I don’t wear a veil?’”

As word spread on August 15 that the Taliban were coming, she and others fled into the mountains. “It was the worst day of my life,” she said. “I felt we lost everything.”

Masuma had spent the past 11 years helping women become entrepreneurs and was working with 91 of them on projects such as a cake business and jam production, as well as teaching gender equality. Now she, like all Afghan women, has been ordered to stay at home. “My women keep calling and asking what will become of them. How can I answer? I don’t even know what will become of myself.”

Wages have been stopped by the international NGO she worked for, which packed up its bags and evacuated its international staff, leaving her behind, along with others at risk. So terrified are people that they are marrying off daughters as young as 12 to stop the Taliban abducting them, she said.

No community has more to fear than the Hazara. About three million people, they are the largest minority in Afghanistan, making up about 10 per cent of the population, and a conspicuous one with their distinctive features. They are said to be descended from soldiers of Genghis Khan, the Mongol leader who invaded Afghanistan in the 13th century.

They have long been persecuted by rulers from the Pashtun tribe but never more than under the Taliban, who massacred about 2,000 Hazaras in a two-day frenzy when they conquered Mazar-i-Sharif in 1998, as well as many in Bamiyan. “We still walk on bones,” said Kabir, 60, who runs a carpet shop in the bazaar. “I fear for my son.” Three mass graves, found near the airport by the UN after the Taliban were toppled 20 years ago, serve as a brutal reminder. One contained 21 members of the same family.

“The Taliban return has brought our bad experience back to life,” said Baryali Amiri. “They came to my village and killed 70 males just in one night, old and young. They dragged them from their houses, tied their hands and shot them. I was lucky not to be there.”

According to Asef Mubalegh, the former deputy governor, the Taliban murdered more than 300 men and boys in one day in the district of Yakawlang in the east of the province.

“People had come out to make peace and they mowed them down,” he said.

This time around the Taliban have insisted they will not discriminate against those with differing religions or ethnicities. In April they put out a video featuring the Shia cleric Maulvi Mahdi Mujahid, a rare Hazara Taliban, urging his people to join their ranks. In their first week in power they allowed Shias to commemorate the Ashura holiday.

But in Bamiyan, just three days after they entered the province, they blew up a modern statue of Abdul Alia Mazari, a much revered Shia militia leader who was tortured and killed by the Taliban in 1995. Broken stones lie around the empty pedestal. Mazari’s name and picture have also been torn down at the airport.

“That was a clear message,” said Mubalegh, who is in hiding. So, he said, was the announcement last week of the Taliban cabinet. It is almost entirely Pashtun, with not a single Hazara or woman.

“Look at their ‘inclusive’ government which is inclusive only of Taliban,” he added. “How can we trust them? I don’t think the day is far off when they will make a repeat of Yakawlang.”

It’s a shocking turnaround from in 2005, when Dr Habiba Sarabi, a haematologist and mother of three, became Afghanistan’s first female governor, a post she held till 2013. Foreign dignitaries travelled to Bamiyan to meet her.

“It was a golden time for Afghanistan,” she said. “I could show that women are equal to men, people had freedom to talk and express ideas, girls were studying, cycling and skating and there was hope and light for women. Two more female governors were appointed in Afghanistan after me. Overnight all those gains and achievements have collapsed.

“The international community brought fake hope to Afghan people, then they demolished everything — I wish they’d never come.”

Now 63, she is in exile in Turkey where her son is a doctor. “Every day I get messages from my community saying how scared they are,” Sarabi said.

Among them are members of the cycling team, spirited young women who told me a few years ago that the freedom of riding their bicycles felt “like flying”.

Since the Taliban came back and banned all women’s sport, the girls have been destroying their bikes and burning their cycling clothes, according to Zakia Mohammadi, who co-founded the Bamiyan women’s cycling club in 2013.

Along with her best friend Zahra, they had increased membership from eight to 30, overcoming criticism from relatives and locals to compete in international races, and encouraged families to let their girls cycle to school. She also became a skier.

“Now I feel like I lost my country, my motherland,” she said. Zakia was already in Germany on a skiing programme, but is terrified for those she left behind. They include 100 female cyclists and family members remaining in Afghanistan because countries, including the UK, have refused to take them.

“My family have set fire to everything — all my certificates and prizes,” she said. “The Taliban knows every cyclist, every woman activist, and are going door to door to search for them.”

Driving around Bamiyan it is impossible to take one’s eyes off the two cavities where the monumental carved Buddhas — 55m and 38m tall — had stood since the sixth century. The Taliban demolished them with a combination of anti-tank mines and dynamite.

Foreign organisations have spent the past 20 years excavating the rubble and debating whether to reconstruct them. The man who ordered their destruction, Mullah Mohammad Hassan Akhund, is now the Taliban’s prime minister.

There are rumours that the Taliban have been destroying other artefacts rescued from the scene. Videos circulating show them saying they want to “lash all Hazaras until they leave Afghanistan”.

“Whatever their leaders are saying we know they have a hatred of Hazara,” said Mohammad Rissa, 31, serving Kabuli pilau and buffalo knuckles in a restaurant which he said used to be full of young female university students. Now only men dine there.

Last time the Taliban were in power Rissa’s family fled to Pakistan after his uncle and father were killed by the fighters. Now his brother is in hiding, having served in the Afghan special forces.

Last week a group of women ventured out to the bazaar together to buy food for their families, their hair under veils but faces uncovered. Taliban told them, “Come out like that for two or three days and you will see how we make you pay.”

On the main street a Taliban commander, Hazrat Mir, deputy detective for Bamiyan district 1, ignored the scowl of a white-bearded old man bent double pushing a wheelbarrow of cauliflowers.

“We know people are afraid,” he said, “but we are Taliban from Bamiyan and all ethnicities of Afghanistan, Hazara, Uzbek, Pashtun, Tajik — we are all brothers.

“Praise be to God our country has eliminated foreigners and their corrupt puppets,” he added. “We want Islam and justice and women to have dignity. My men are dealing with crimes in just one day that used to take months.”

But he admitted he was worried his men had not been paid. “I’ve been paying them out of my own pocket,” he said.

Last week, after the Taliban crushed a resistance movement in the Panjshir valley, the last holdout against their authority, the country’s economic collapse became the biggest threat to Afghanistan’s new rulers.

In the shadow of one of the cavities where the Bamiyan Buddhas once stood, a few farmers were watching their wives harvest some of the valley’s celebrated potatoes. Zabiullah, a father of three, filled an 84kg sack which will sell for 900 Afs (about £8), complaining that he struggles to survive, particularly with the Taliban taking one in ten sacks as tax.

Prices have soared since the Taliban took power and last week the World Food Programme reported that about 93 per cent of households in Afghanistan were not consuming enough food. The United Nations Development Programme warned that without international help the country could sink into almost universal poverty, with 97 per cent below the poverty line.

“What do I think of Taliban?” asks Zabiullah. “What will I change by thinking about it? My days are filled with thinking of how to stop my children going hungry. I’d go to Iran or Pakistan for work but I cannot even afford to get there.”