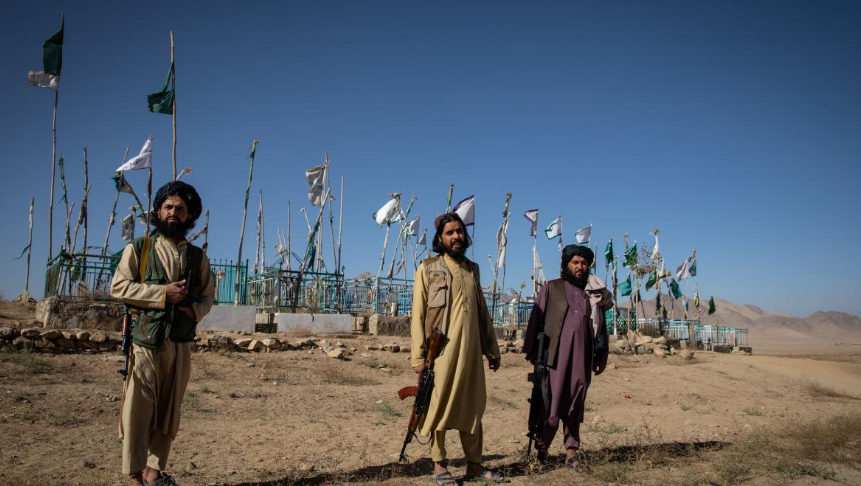 Before he took over security at Afghanistan’s only five-star hotel, Mutasim Bila was part of a Taliban unit that ran a secret school for suicide bombers.

His WhatsApp profile proclaims: “Suicide attack is the secret to success.” It frustrates the commander a little that he never got to carry out a mission.

Instead he was drinking tea in the garden of the Serena Hotel in Kabul, which the Taliban attacked twice in recent years, detonating suicide bombs in the lobby and gunning down guests in the gym and restaurants.

Behind the commander stood several of his men, one blowing a runny nose with his scarf, another with long hair and kohl-rimmed eyes, all armed and averting their gaze from the western woman with a notebook.

“I wanted to suicide myself but as I was commanding many Taliban, my friends wouldn’t let me,” Bila said. “I had a dream of blowing myself up with so much explosive that Americans would not even be able to find their dead bodies.”

What about your mother, I asked? “She was worried about me fighting,” the commander conceded. “I lost two of my four brothers in the jihad. But she would have been proud of me doing a suicide attack as she knows what barbaric things were happening to us.”

One of his fighters, who spent years in Guantanamo, returned home only for his mother to ask him: “Aren’t you ashamed of yourself for not blowing yourself up?”

Bila, 39, has spent his adult life fighting, and been seriously wounded four times. “My body is scarred like the map of Afghanistan,” he said.

He and his men were among the first Taliban fighters to enter Kabul when the city surrendered last month. The next day they were put in charge of guarding the Serena, which houses a temporary Qatari embassy and foreign journalists.

Now he and 52 Taliban fighters under his command patrol the entrance, check vehicles for explosives and sleep in the rooms. At mealtimes they wander through the buffet, helping themselves to apple crumble with their Kalashnikovs on their backs, mingling with guests who they would have viewed as potential targets until last month.

It is an uneasy arrangement. Seeing foreign women in the restaurant with their hair uncovered, the commander complained to the manager: “We didn’t fight jihad for 20 years for them to wander around like that.”

It is even more uncomfortable for the staff, some of whom were working at the Serena seven years ago on the day that Taliban raiders pulled guns from their socks and murdered nine guests at the brunch buffet, including a well-known Afghan journalist and his wife and children.

The commander was keen to relegate those associations to the past, however. “You are 100 per cent safe,” he said.

Until recently he and his men were part of Fateh brigade special forces, responsible for training suicide bombers at a secret academy in his home province of Logar. Of his 120 men, 30 were fedayeen – or suicide bombers.

A few days later I headed to his village with three of his men, one of whom was an instructor for suicide bombers.

During the years of war Logar was one of the most dangerous places in the country, its inhabitants caught between distrust of their government and pressure from the Taliban.

It was a long drive along an unmade road, skirting jagged mountains of bleached stone, through fields dotted with ruins and graveyards, so arid it was hard to imagine anything can grow. Eventually when it seemed the road could go no further, we stopped.

Humaye village is a warren of crumbling mud-walled houses, home to about 600 families. A small boy brought yellow jerry cans of water on a donkey. The only well, built 20 years ago, stopped working long ago and the spring dried up. It has one shop and no clinic. A few goats wandered about. What little income there is comes from wheat, and sons who work abroad and send back money. The only signs of the 21st-century were a few solar panels and a blue painted building – a school for boys that has just opened.

“We got nothing from the last 20 years except death and destruction,” complained Haji Mohammad Rassoul, 70, sitting with turbaned elders on the floor of his guest room.

A water jug was passed round by his grandsons and a cloth spread with flat bread, chopped tomatoes, steamed okra and yoghurt. They thanked me for coming and apologised for the lack of meat. “If we had known in advance we would have slaughtered a goat,” Rassoul said.

They said they were delighted that the Taliban were in power. “Finally we have peace,” they said.

There were many stories of atrocities by American forces. “In these 20 years we have had night raids, bomb blasts, our cars and motorcycles burnt, our money stolen, and our sons killed – there is not a home that was not affected,” said Haji Nadeer Khan, 51, the local malik, or village chief.

He endured three night raids. “The first was nine years ago,” he said. “We were woken by a helicopter and around 20 men landed on my rooftop, Americans and Afghan soldiers. I came out into the yard and 18 lasers were pointing at me. I had six guests from Kabul and they took us all out, stripped us and made us stand all night, accusing us of working with the Taliban.”

The second time, he claimed, they dragged out his 20-year-old nephew and shot him dead in front of them. “The more they inflicted pain, the more our hatred increased,” he said.

Rassoul nodded in agreement. “Two years ago they came and banged on my door about 8.30pm,” he said. “I rushed to open it as they blast the door if you don’t. They tied my hands then wrote number 662 on my house. They had dogs and started searching. I begged them to stop as there were women inside but they blew up my motorcycle and dragged out my 21-year-old son and started beating him until he was unconscious.”

The village lost 18 fighters, including Maulvi Siddique, Mutasim’s predecessor as commander, and 25 civilians.

“Every type of bad thing happened here,” Banosai, another villager, said. “Things were so bad that when we went to bed we said goodbye forever, as we never knew. Now when my children see a plane they are scared.”

Another elderly man added: “Ninety per cent of people here have problems like depression and sleeplessness because of the raids.”

They claim to have been the first district in the country to be taken by the Taliban. “We are Islamic so of course we support them,” said Rassoul.

They got the news of the Taliban entering Kabul on the radio.

“Of all governments I have seen in my seven decades, the last government was worse of all. And we were happy to expel the foreigners. No one can come to Afghanistan by force — you Brits, the Russians, now everyone knows.”

After lunch they showed us around. Outside a crumbling wall, an old man with a walking stick called Haji Barakzai, said: “This was my brother’s house.” Holding up his fingers he counted to ten, listing those killed in an airstrike.

My request to speak to women caused consternation. Eventually I was ushered into female quarters to meet a terrified young woman with a tightly swaddled baby and her mother-in-law. When I asked questions, a man answered, telling me how scared the women were before and how happy they were that the Taliban had taken over and there was peace.

In another small compound, a widow showed me her empty store cupboard. Her only surviving son was in Kabul doing day labour and sent money when he could – 200 Afghanis, or £2.

After years of neglect, the villagers hope they will get a paved road and a clinic. “Every year five or six women die in childbirth because they cannot get help,” Khan said. Others said they would like a sports ground for football and cricket.

On the way back from the village, our Taliban escort stopped at one of the graveyards of stones and fluttering flags.

“These were all our friends and this our former commander Maulvi Siddique,” said Qadratullah, 24. “We got our freedom because of the sacrifice of these people not because of peace talks.

“We are fedayeen and were waiting for the moment to blow ourselves up. I wanted to do a car bomb.

“I’ve trained many friends, motivated them by translating surah [chapters of the Koran] and hadith [sayings of the Prophet] and told them about the evils of occupation.”

What about all the innocent civilians killed, I asked. “We were very careful,” he replied. “I know of at least five occasions when we cancelled operations.”

Under instructions from Taliban high command, he refused to show me where the training academy was, although a camp-like area surrounded by shipping containers seemed to fit the description.

“It’s secret,” he said. “Even many of our own colleagues didn’t know where it was or who among us were fedayeen.”

On the way back he pointed out a captured Humvee. “We were going to pack it with explosives but we never got a chance.”

I asked what they would have done if I had come to the area two months ago. “We would have captured and killed you,” he said.