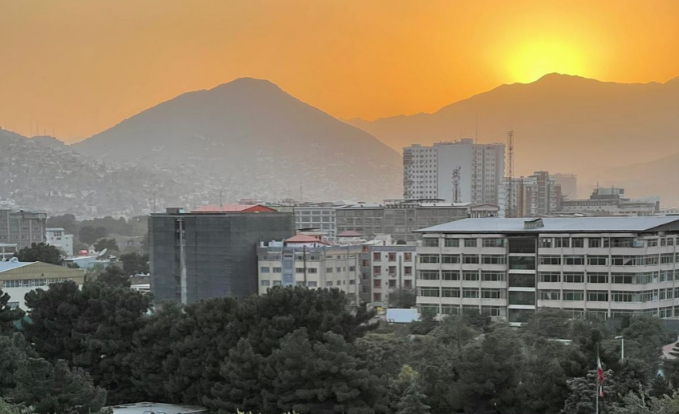 KABUL—Clad in body armor and helmets, Uzbekistan’s border guards took positions in the middle of the bridge spanning the wide Amu Darya river on Monday morning, examining the papers of a handful of Afghans coming their way. Beyond them, the Taliban’s new Islamic Emirate of Afghanistan began.

A small minivan, carrying me and three Afghan men heading home, pulled up by the customs office on the Afghan side of the river. A white Taliban flag flew above the compound. The Uzbek driver shook his head, puzzled about why anyone would go back to Afghanistan, and took off after collecting his $5 payments.

It has been only three weeks since an Italian military plane flew me out of Kabul, the morning after the government of President Ashraf Ghani collapsed and the Taliban took over the country. The Islamist movement, eager to secure international recognition and a resumption of aid, has since said it welcomes foreign reporters. With no passenger flights into the country, the only way in currently is overland, usually via Uzbekistan or Pakistan.

At the Hairatan border, the Taliban hadn’t yet gotten around to removing the signboards of the fallen Afghan republic, or even replacing the entry stamps. But a large, bearded Taliban official, with flowing long hair, occupied the immigration office on Monday. He didn’t read English, and so, after thumbing my passport, seemed concerned and asked “Name?” Unconvinced by the answer, he flicked through the pages.

His eyes shone with delight as he found a United Arab Emirates residence visa, with the name spelled in the Arabic script, largely the same as the one used in Afghanistan’s two languages. He copied it into the handwritten ledger, stamped the passport, and waved his hand in a welcome to the Islamic Emirate. There was no cumbersome biometric collection that the Afghan republic’s border control used to perform.

Outside, on the road to northern Afghanistan’s biggest city of Mazar-e-Sharif, some things seemed unchanged. The driver played Bollywood hits, unbothered by the Taliban’s new prohibitions on music. Inside Mazar-e-Sharif, there was still a giant mosaic portrait of Ahmad Shah Massoud, the leader of the anti-Taliban Northern Alliance who was assassinated by al Qaeda in 2001—and whose son’s forces attempting resistance were routed in the Panjshir Valley overnight.

At the checkpoints, Taliban fighters—many of them in their late teens, and all of them seemingly giddy with their unexpectedly swift victory—were soft-spoken and polite, asking forgiveness for having to look into the trunk. Only one of them asked to open the suitcase, more out of curiosity about what items a foreign suitcase may contain than security considerations. They wore ankle-length trousers, scarves that they used to cover their hair, and sometimes mirror sunglasses. A handful carried U.S.-made M4 rifles with optical scopes, infrared illuminators and grenade launchers attached.

A couple of blocks beyond the mural with Mr. Massoud, Mazar-e-Sharif’s famous Blue Mosque was closed, its outer garden locked up. Men sold ice cream and fresh juices, sheltering from the sun under parasols and awnings in the bright-red colors of the flag of the People’s Republic of China, which unlike Western nations has kept its embassy to Afghanistan open. A vendor pushed a cart overflowing with watermelons, some cut in half to show the succulent pulp inside.

In the center of the intersection, three turbaned, bearded Commanders of the Faithful of the Islamic Emirate sternly surveilled the traffic from a billboard. To the right of the Taliban’s one-eyed founder Mullah Omar was Akhtar Mohammed Mansour, killed by a U.S. drone strike in 2016. To the left was the country’s current supreme leader, Haibatullah Akhundzada, who has yet to make a public address.

At Mazar-e-Sharif’s sleepy airport, a dozen battered yellow taxis gathered ahead of the 4 p.m. flight to Kabul by Ariana Afghan Airlines. It was the third such daily flight since Qatar brought equipment to restore some basic flight operations at the Kabul airport after departing American forces rendered the control tower inoperable at the end of August.

Inside the Mazar-e-Sharif airport, there was a sense of superficial normalcy. Uniformed Afghan border police troops, the tricolor patches of the fallen Afghan republic still on their shoulders, operated the luggage scanner, using “sir” to speak to the only foreigner there. Two Taliban overseers with a walkie talkie watched the proceedings without interference, perched on their chairs. Another Taliban, dressed in a fresh police uniform but with black shoulder-length hair a sign of his true identity, lounged nearby.

Just as before the Taliban takeover, all the luggage was lined up on the floor and a Western-trained handler walked over a black dog to sniff for explosives. (Even though the Taliban are now in charge, Islamic State continues to pose a terrorist threat.) No explosives were found. The dog returned to its metal bowl, under a Taliban combat bike that flew a white flag of the Islamic Emirate.

This was the only flight of the day. The airport’s duty free shop, with its cartons of Marlboros and a collection of Playboy-branded colognes, was closed. A wall-mounted TV played a Turkish soap opera. Outside, only the receding hairline and the eyes remained of a giant billboard that once depicted Atta Mohammad Noor, the local warlord and former governor who was supposed to defend Mazar-e-Sharif from the Taliban but fled over the bridge to Uzbekistan on Aug. 14.

Ariana’s Boeing 737 aircraft was chipped on the outside but flew smoothly and landed safely. With no radar or navigation system in Kabul, it was all flight by sight, with a wide loop over the Afghan capital. “Welcome to Hamid Karzai International Airport,” the pilot announced, using the name that is unlikely to last long. Mr. Karzai, who became president following the U.S. invasion, has remained in Kabul but, after initial meetings with Taliban leaders, now is under a soft form of house arrest.

The front of the domestic terminal building was covered by a new blue-and-white banner proclaiming: “The Islamic Emirate of Afghanistan wants good and strong diplomatic, economic and political relations with the entire world, within the framework of reciprocal interaction and commitment.” A soldier of the Taliban’s elite Badri 313 unit, clad in tactical gear, grinned when asked whether it was OK to take a photograph. As the wind blew, the banner flapped and revealed a portrait of Mr. Ghani underneath.

The parking lot outside the airport was filled with wrecked, shot-up SUVs, the remnants of the last days of the American presence. Then, beyond the checkpoint, the usual chaos of Kabul’s honking cars began. The monument to Mr. Massoud, just outside what used to the U.S. Embassy on what used to be the Great Massoud Road, had been vandalized. The blast walls that lined the compound and the adjacent Green Zone in the city’s Wazir Akbar Khan neighborhood shone with a fresh coat of white paint.

At the very end of the road, workers were putting the last touches on the paintover, which destroyed images of Afghan kings and national heroes, of the country’s famous women and poets. Instead, the men stenciled slogans ahead of the inauguration of the Taliban’s new government, expected within days.

“The end of the invasion, the beginning of independence,” went one.

“Our nation has defeated the U.S. with the help of God,” continued another.

“How beautiful the spring of freedom is,” concluded the third