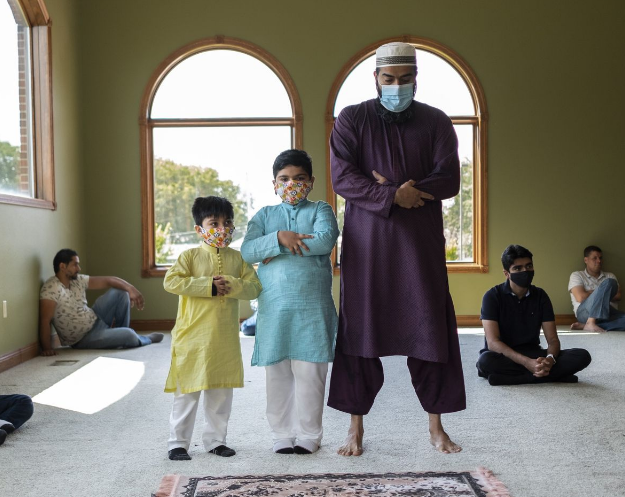 In the years since 9/11, Saif Bhuiyan said he was questioned rudely by security personnel and officials at airports and elsewhere. On the first anniversary of the terrorist attacks, someone hurled a water bottle at him.

At the time, Dr. Bhuiyan was in the U.S. as a university student from Bangladesh. Twenty years later, the 42-year-old information-systems professor at the University of Northern Iowa says he still sees perils to being Muslim in America and often treads carefully after a violent event involving Muslims hits the news.

But he says he has seen the treatment of Muslims improve in many places over the last two decades as the number of people practicing Islam across the U.S. has grown.

“There are a few loudmouths who say, ‘We don’t want these guys,’ ” said Dr. Bhuiyan, who is a board member at the Masjid Al-Noor Islamic Community Center, the largest of three mosques in Waterloo. “But there is a larger community of people who are happy. You won’t hear many people complaining about having Muslim neighbors.”

In the years since the attacks of Sept. 11, 2001, the nation’s Muslim population has grown to reach an estimated 3.85 million, or a little more than 1% of the U.S. population, according to the Pew Research Center. That is up from 2.35 million in 2007, and the trend is expected to continue, Pew researchers say, eventually surpassing the U.S. Jewish population by 2040. That forecast predates the expected influx of refugees to the U.S. from Afghanistan.

The U.S. today has 2,769 mosques, up 129% from 2000, according to the Institute for Social Policy and Understanding, a Washington, D.C., think tank focused on Muslim issues.

The change has been particularly noticeable in places like this Midwestern city, 235 miles northwest of Chicago and set on the banks of the Cedar River. Twenty years ago, refugees and immigrants from Bosnia had helped build a Muslim community here. In the years since, Waterloo’s Muslim population has grown to include immigrants from Pakistan, Bangladesh and other countries who arrived in Iowa to work in factories, hospitals and other local businesses.

Eastern Iowa struggled in the 1980s with a declining population and deep job cuts at factories tied to farming, including the closure of a large meatpacking plant that employed thousands. To rebuild its workforce, communities launched programs to help refugees, including Muslims, resettle. Other Muslims moved to the area for work or school.

Today, minarets stand over sections of Waterloo, population 67,000. Nearby Cedar Rapids is home to a halal inspection company and halal meat wholesaler, which follow religious butchering practices and forbid pork consumption. Iowa now has 23 mosques, and the National Register of Historic Places recognizes a small mosque opened in 1934 in Cedar Rapids, south of Waterloo, as the first official building constructed specifically for Islamic worship in the country.

Waterloo had one small mosque in the late 1980s and early 1990s. Now the largest of its three mosques, the Masjid Al-Noor says it counts about 3,000 families as members. It opened a new building in a residential neighborhood in 2011.

Nazry Jaafar, 46, an electrical engineer at John Deere who moved to the U.S. from Malaysia decades ago, said his wife has stopped wearing a head scarf when she goes out because she grew tired of being judged.

“You always have that fear that someone is looking and talking behind you,” he said.

In 2016, vandals spray-painted “Trump” on an outside wall of the mosque building, after the now-former president had campaigned on banning Muslims’ entry into the country. About two months ago, security cameras caught three people coming up to the facility’s doors in the middle of the night, making threats and hurling insults. The mosque reported the incident to the Federal Bureau of Investigation.

Mr. Jaafar said no one has said anything he considered bigoted to him. Many co-workers who aren’t Muslim have told him that they are looking out for him when issues regarding Muslims appear in the news, he said.

“The people I work with are more worried about me than I am myself, so that gives me hope,” he said.

While hate crimes in the U.S. rose about 6% last year to levels not seen in more than 10 years, according to FBI data, incidents targeting Jews and Muslims dropped last year by 30% and 42%, respectively, after jumps for both groups earlier in the last decade.

Having new people move to Waterloo has been good for the community and the local economy, said Erin Tink, executive director of the Waterloo Community Foundation, which collects and disburses nonprofit funds in the area.

“I assume there is quite a bit of microaggression because that’s the way we humans are. But also, for those that call Waterloo home, I think they [live here] because they enjoy the diversity,” she said.

On a recent Friday, the day for weekly religious services, about 65 men gathered in rows in the Masjid Al-Noor’s carpeted main prayer room. Ahmed Abouzid, the mosque’s imam, recited scriptures from the Quran in Arabic, then spoke about religious lessons from the life of Muhammad, Islam’s chief prophet. Muslims must work with non-Muslims and judge them by their actions, not their religion, Mr. Abouzid told members. Older men sat in chairs, but most men stood and then bowed. Women and children gathered in an adjacent room.

Speaking at Friday prayers a day before the 20th anniversary of 9/11, the imam said that Islam must be a religion of peace, one that forbids the shedding of innocent blood, whether Muslim or non-Muslim. He urged American Muslims to talk more, including with non-Muslims, about their faith and traditions to help reduce misunderstandings.

“Muslims in America, or in the West, need to participate more in the community,” Mr. Abouzid said in an interview. “If you need people to know about you, tell people about yourself.”