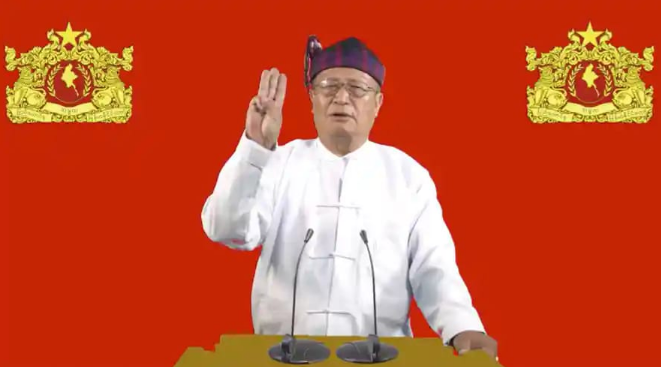 Myanmar’s self-declared parallel government, which was set up by pro-democracy politicians, has announced a “defensive war” against the junta, calling for civilian armed groups to target the military and its assets.

Duwa Lashi La, the acting president of the National Unity Government (NUG), said Tuesday marked the beginning of a nationwide revolt. He warned people to avoid unnecessary travel and stock up on essentials.

Over recent months, grassroots forces have emerged across Myanmar to oppose the military, which seized power in a coup in February and has inflicted deadly violence on anyone who protests against its rule.

The groups, which have carried out guerrilla-style attacks on military targets, appear to operate independently at a local level, and vary in their resources and training. In some cases they are supported by ethnic armed organisations, which have fought the army for decades, demanding greater autonomy.

Duwa Lashi La called upon such groups to target “the military junta and its assets in your respective areas”, “carefully protect the lives and properties of the people”, and observe codes of conduct. The groups were urged to immediately target the junta’s leader, Min Aung Hlaing, and the military council in different ways, and to maintain control of their areas.

Duwa Lashi La also said soldiers, police and civil servants should resign from their posts and join the revolt. “From today onward, all the civil servants under the military council, we warn and forbid you from going to the office,” he said. The public, he said, should assist the armed groups and their allies.

The statement comes ahead of the opening of the United Nations general assembly next week in New York, where it is expected that a decision will be made on who should represent Myanmar – a member of the junta or a representative of the NUG, which was set up by ousted lawmakers and opponents of military rule. The junta previously said it had dismissed Kyaw Moe Tun from his post as Myanmar’s UN ambassador, after he voiced support for the pro-democracy opposition. However, Kyaw Moe Tun has continued to serve at the UN.

Diplomatic efforts to end the crisis have been led by the Association of Southeast Asian Nations (Asean), but there has been little progress. The group’s envoy to Myanmar, Erywan Yusof, told the Kyodo news agency this week that the military had accepted his proposal for a ceasefire until the end of the year to allow for the delivery of humanitarian aid. The military’s opponents, however, were skeptical.

Following the NUG’s announcement on Tuesday, local media reported fighting in border areas between the army and its opponents. Clashes broke out in Sagaing, in the north-west, between junta forces and the Kachin Independence Army, which has fought for greater autonomy for the Kachin people for decades, and has backed anti-coup protesters.

In the southern Tanintharyi region, fighting occurred between the junta forces and Karen National Union, one of the country’s oldest ethnic armed organisations.

In the Magway region, an armed force said it had attacked five military targets.

In Myanmar’s largest city, Yangon, the streets reportedly remained calm, though there was an increased military presence. Many residents rushed to shops to stock up on supplies.

Duwa Lashi La said he believed the international community would understand the reasons for his statement. “I believe that our neighbouring countries, Asean countries, the United Nations, and all other countries around the world understand that we do it [declare a revolt] out of necessity based on the country’s current situation,” he said.

According to the Assistance Association for Political Prisoners Burma, which has tracked arrests and deaths following the coup, 1046 civilians have been killed and 6,230 are currently detained.

Medics, journalists, activists and elected politicians are among those who have been arrested since February