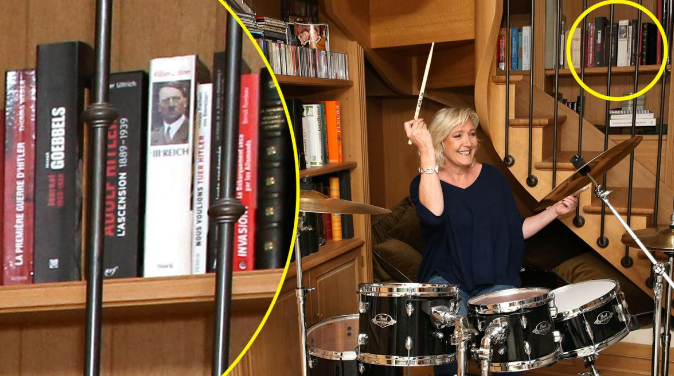 Marine Le Pen, the leader of the far-right National Rally, has suffered a setback in her quest for respectability: being pictured in front of a book by Hitler’s propaganda chief.

Le Pen, 53, pretended to play the drums for a photograph to accompany an article in Le Point magazine on her plans to win the presidency next year, apparently unaware that a volume of Joseph Goebbels’s diaries was on the bookshelf behind her.

There was also a copy of The Rise and Fall of the Third Reich: A History of Nazi Germany by William L Shirer, an American journalist. The French version of the book, published in 1960, has Hitler’s face on the spine, adding to what is being viewed as a public relations disaster.

Since taking over the leadership of the party from her father, Jean-Marie, a decade ago, Le Pen has struggled to distance herself from his racist and antisemitic language.

When the books were spotted online, critics claimed she was still surrounded by the successors of the far-right French politicians who collaborated with the Nazis. The left-wing daily Libération said the photograph had been taken in the home of a lawyer near Trinité-sur-Mer, in Brittany, where Le Pen spent her summer holiday. The lawyer, a friend of Le Pen, told the newspaper he had the books because he was interested in history.

Yann Barthès, a TV presenter, said the photo showed that Le Pen’s quest to bury the party’s reputation for amateurism was failing, adding, “This photograph is like a PR stunt from the 1980s.”