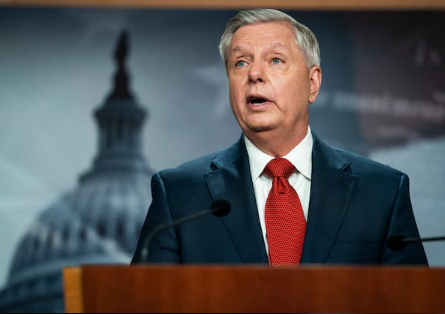 Lindsey Graham says United States ‘will be going back’ into Afghanistan

Sen. Lindsey O. Graham (R-S.C.) says he believes the United States “will be going back into Afghanistan” despite the recently declared end of nearly two decades of American military presence in the country.

Graham, in an interview Monday with the BBC, predicted a looming clash between the Taliban and extremist groups such as the Islamic State would necessitate American military action in the country. “We will be going back into Afghanistan,” Graham said. “We’ll have to, because the threat will be so large.”

He said that Afghanistan “will be a cauldron for radical Islamic behavior,” presenting the United States with only two options: “You can say that’s no longer my problem … or hit them before they hit you.”

Graham has long advocated for an aggressive campaign against the Islamic State. But public polling shows that the American public has little appetite for prolonging the conflict.

A Washington Post-ABC News poll last week found that Americans overwhelmingly supported President Biden’s decision to end the war in Afghanistan, though they

disapproved of how he executed the withdrawal. The last time a majority in a Post-ABC News poll said the war was worth fighting was in late 2009, and then just a narrow 52 percent majority said so, with Republicans more likely than Democrats or independents to say the war, which began under Republican President George W. Bush, was worth the cost.

The United States will maintain “robust counterterrorism capabilities” in the region, said Secretary of State Antony Blinken, after the Islamic State claimed responsibility for a suicide bombing outside Kabul airport, which killed 13 U.S. service members and more than 170 Afghan civilians who were desperately trying to flee the country.

The United States hit back in a drone strike in Kabul, which the chairman of the U.S. Joint Chiefs of Staff Gen. Mark A. Milley told reporters was targeting an “imminent” threat posed by the Islamic State’s offshoot in Afghanistan. Ten Afghan civilians in a northwestern Kabul neighborhood — eight of them children ages 18 and younger — were killed in the attack, family members told The Post.

Graham, a staunch ally of Donald Trump, praised the former Republican president’s actions in Afghanistan and in the Middle East in the same interview, after previously calling for Biden’s impeachment over the withdrawal.

Graham has visited Afghanistan several times, including with Biden in 2009, more than a decade earlier.

The Taliban are not reformed, they’re not new,” Graham said. “They’re going to give safe haven to al-Qaeda who have ambitions to drive us out of the mid-east writ large, and attack us because of our way of life.”

He also compared the Afghan conflict to ongoing fighting in Syria and Iraq, which continue to draw in American troops, largely due to the presence of Islamic State.

The Islamic State offshoot is deemed a more extreme rival of the Taliban by regional experts, who say the Taliban could try to root out the group, although others remain skeptical.

Critics of the withdrawal, including some top Democrats, have said that the Biden administration failed to adequately prepare. Images of chaos outside Kabul’s main airport made global headlines as the United States rushed to evacuate its troops and nationals.

On Tuesday, Blinken told a news conference in Doha that nearly 100 U.S. citizens still remain in Afghanistan, including dual nationals.