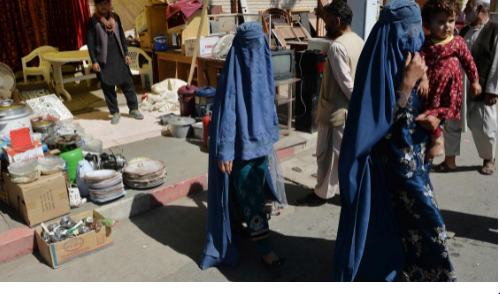 Hamid Karzai speaks out for Afghan women as Taliban loom outside

Afghanistan’s former president Hamid Karzai has spoken out against the Taliban for the first time, decrying their restrictions on girls’ education and revealing his despair at seeing so many talented young Afghans fleeing the country.

“Education of girls is extremely important,” he told The Sunday Times in an interview at his house in Kabul, now guarded by the Taliban. “There is no other way. This will not be a country which stands on its own feet without education, especially for girls.”

High schools across Afghanistan reopened yesterday for the first time since the Taliban took power last month — but only for boys, making it the only country on earth to exclude girls from secondary education. Sameena, 14, from Kabul, forced to stay at home while her brothers returned to their desks, described it as “a dark day” and “an end to our dreams”.

Unlike when the Taliban were in power in the 1990s girls have been allowed to attend primary schools. But in another indication of the ascendancy of hardliners within the new Taliban government, the Ministry for Women’s Affairs has been replaced by the Ministry for Prevention of Vice and Promotion of Virtue; the notorious morality police who beat women for using lipstick or not wearing the hijab.

Karzai, 63, ran the country’s western-backed government for 13 years after the Taliban was toppled in 2001. He has three daughters, aged 4, 7 and 9, and said that one of his proudest achievements from his time in office was that millions of girls returned to school.

As one of the few senior politicians from the recent past not to have fled the country, Karzai has been holding regular meetings with Taliban leaders since they took over on August 15. His connections with the movement date from the 1990s, when he worked closely with them. His home town of Kandahar has long been the Taliban’s spiritual heartland, and he horrified his western backers while in office by describing them as “brothers.” Even so, many believe that Karzai is courting danger by criticising the country’s new masters now.

He intends to “continue to speak out and speak out strongly”, he said from his library, where the shelves are lined with photos of himself with the likes of Prince Charles and President George W Bush. “I stayed because I love my country and wanted to reassure people. We need a government that brings development and delivers services, has good relations with the rest of the world and where people live happily without fear or repression, and we must keep working for it.”

He was particularly upset to see a girls’ football team flee last week. “The loss of young, educated and talented Afghans is an irreparable loss for our country,” he said. “They are an asset. We must reverse this and do all we can to keep youngsters in our country and keep up our education system or we will go backwards.

“The fact is this is a society which has changed massively in the last 20 years. It’s the responsibility of the Taliban to make sure young educated Afghans stay for the wellbeing of our country.”

He shared his sadness at knowing that so many women MPs, judges and activists are now in hiding. “People are fearful. The Taliban should work to remove this environment of fear and create an environment both physically and psychologically that’s conducive for people to stay.”

During his time in office he fell out with the West and often criticised actions such as night raids and airstrikes in which civilians were killed. The US military admitted yesterday that one of its last acts before leaving the country on August 31, a drone strike on a suspected Islamic State militant, was “a tragic mistake” that had killed ten innocent people, seven of them children; the youngest aged 2.

“I am not unhappy the foreign troops have gone,” said Karzai. “They were not respecting our culture, and this country needs to stand on its own.”

He helped to mediate an end to the fighting in Panjshir, the region that held out the longest against the Taliban, and was initially positive about his negotiations with the victorious Islamists. Now, however, he admits he is disappointed. “From the very beginning in all our talks we emphasised three fundamentals: education and education for girls, inclusivity in government, and the place of women in our society. We also spoke of the importance of the national flag and values of the country.

“They fully agreed and said all the right things, but so far things didn’t happen that way. We need their actions to match their words or Afghanistan will again be cut off from the world.”

He said their caretaker cabinet announced ten days ago had sent the wrong signal. “We need an Afghanistan that belongs to all Afghan people, men and women, and all ethnicities, and the only way forward is an inclusive government. What they have announced is not.”

Fearing for their security when the Taliban first took over, Karzai and his family moved in with Abdullah Abdullah, the former chief executive of Afghanistan, who also remained in the country. But the Karzais have now returned to their home in central Kabul. A Taliban guard stands outside, noting all those who enter.

Yesterday a plane left for Pakistan full of Afghans fearful for their lives, each paying about £1,000 for a ticket to an uncertain future. Many were weeping, including Woranga Safi, 32, who ran a women’s education project in the northern city of Balkh and was fleeing with her husband and two small children.

The Taliban have said they would consider allowing girls to attend high school, and women to work, once the security situation allows it. “That’s what they said last time,” she said. “And they are searching the homes of women like me.”

Keeping girls out of schools was a terrible misjudgement, she added. “This is a disastrous day for Afghanistan.”

For all Safi’s tears, many Afghans would see her as one of the luckier ones. On a street alongside the country’s Olympic headquarters the pavements are lined with people selling humble possessions such as kettles, clothes and mattresses.

“We are hungry,” said Nooryali, 45, a father of six, sitting behind a carpet, a small TV, some dishes and a sewing machine. “We feel shame sitting here selling what we own, but what can we do? We are hungry.”