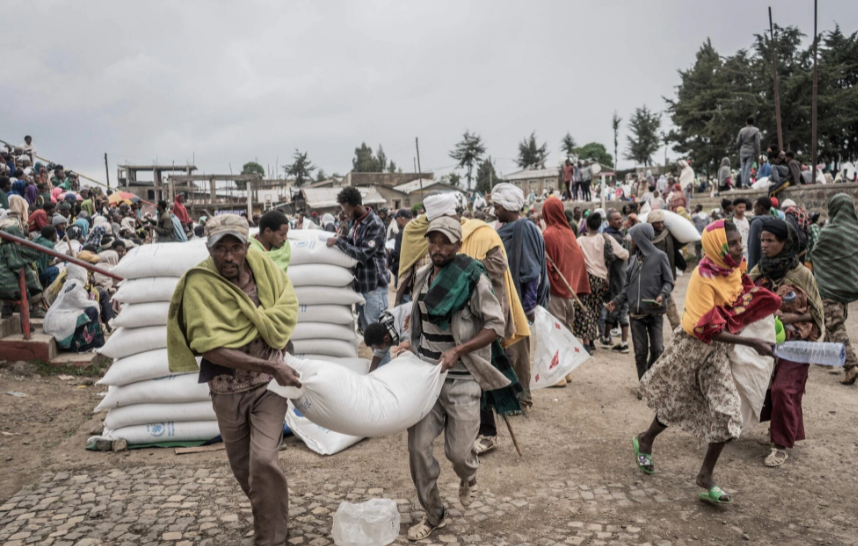 President Biden signed an executive order on Friday threatening sweeping new sanctions that aim to stop the escalating war in northern Ethiopia and allow urgently needed humanitarian aid to flow into the region.

The administration has not yet applied the sanctions, hoping to shift the course of the war without directly punishing officials from Ethiopia, Africa’s second most populous country and an important strategic ally. With both sides pushing hard for a military victory, critics said the latest measures may be too little, or too late.

Prime Minister Abiy Ahmed of Ethiopia, a Nobel Peace Prize laureate now exposed to possible sanctions, reacted with indignation and defiance. In a three-page statement, his office accused the West of bias, denounced any criticisms of Ethiopia as the product of neocolonial impulses, and showed no sign that he intended to bow to Mr. Biden’s demands.

The U.S. action is driven by a sense of urgency at a rapidly deteriorating situation and fears that fighting could intensify with the coming end of the rainy season. Just 10 percent of required humanitarian aid reached the Tigray region in the past month as a result of Ethiopian government obstruction, according to two American officials who provided a background briefing to reporters.

Fighters from various factions have been accused of atrocities against civilians, with the latest accusations including the Tigrayan forces that are fighting the Ethiopian central government. And Mr. Abiy has intensified a mass recruitment drive, and acquired new weapons, in advance of the expected surge in fighting next month, the officials said.

“Nearly one million people are living in famine-like conditions,” Mr. Biden said in a statement. “Humanitarian workers have been blocked, harassed and killed. I am appalled by the reports of mass murder, rape and other sexual violence to terrorize civilian populations.”

The executive order targets individuals and entities from the Ethiopian and Eritrean governments, the Tigray People’s Liberation Front and the Amhara regional government, who face possible asset freezes and travel bans.

It is a step up from weaker and largely ineffectual measures, including visa restrictions, imposed by the United States in May. Administration officials declined to say when they would start to implement the sanctions.

But action is a matter of “weeks not months,” one official said.

To avoid sanctions, the Americans are demanding that leaders on all sides must enter peace negotiations and accept mediation under the former Nigerian president Olusegun Obasanjo, an African Union envoy who is scheduled to land in Ethiopia this weekend.

To ease the humanitarian crisis in Tigray, where five million people are in urgent need of help, the Ethiopian government must allow daily convoys of relief trucks, and restore basic services like electricity, communications and banking, the official added.

“A different path is possible but leaders must make the choice to pursue it,” Mr. Biden said.

Mr. Abiy’s office said that the American policy “comes not only as a surprise to our proud nation, but evidently surpasses humanitarian concerns,” and vowed “not succumb to consequences of pressure engineered by disgruntled individuals.

The Tigray People’s Liberation Front did not immediately respond to requests for comment on the American action.

Critics have questioned the effectiveness of the latest American measures, saying they are unlikely to change the behavior of an Ethiopian government that has proved impervious to outside criticism so far.

“The Ethiopians say the American pressure has been unrelenting,” said Cameron Hudson, a senior fellow with the Atlantic Council’s Africa Center. “But we feel it has been nonexistent, aside from a bunch of statements.”

The fighting, which started in Tigray in November, is escalating at an alarming pace. American officials said Mr. Abiy appears to be hoping for a military victory he can vaunt when Ethiopia’s new Parliament comes into session on Oct. 8.

Military experts say Ethiopia was not believed to have armed drones at the start of the war. It was unclear which country supplied Ethiopia with the drone.

Tigrayan forces have pushed deep into the neighboring Amhara region, capturing several major towns. But in recent weeks they have run into pockets of staunch resistance and faced accusations of violence against civilians.

Amhara officials accused the Tigrayans of killing at least 120 civilians in the Dabat district, about 50 miles north of the ancient city of Gondar, after a three-day battle in early September. Those accusations have not been independently confirmed.

Speaking by phone, Birhanu Mulu, manager of the hospital in the town of Nefas Mewcha, said Tigrayan fighters stormed through the hospital earlier this month, destroying machinery and medication. “There are currently no patients in the hospital,” he said.

Tigrayan officials dismissed the claims of killings as “fabricated allegations” and called for an independent investigation.

Tigrayan civilians have suffered some of the worst abuses of the war, including sexual violence, massacres and ethnic cleansing, since Mr. Abiy sent in troops in November. But a report by Human Rights Watch, published Thursday, said that one group had been victimized by both sides — Eritrean refugees who have been raped, killed and detained by both Eritrean soldiers and rival Tigrayan militias.

If the conflict continues on its current trajectory, it could cause the collapse of Ethiopia, a country of over 110 million people, with “disastrous” consequences for the Horn of Africa region and beyond, the other Biden administration official said.

The United States has already moved against one senior figure in the war. In August the United States brought sanctions against Gen. Filipos Woldeyohannes, the chief of staff of the Eritrean Defense Forces, over human rights abuses by his troops in Tigray.

General Filipos was designated under the Global Magnitsky Human Rights Accountability Act, which targets perpetrators of human rights abuse and corruption around the world.

Although America’s allies share its gloomy assessment of the situation in Ethiopia, not all agree on its solution.

A senior European official, speaking on the condition of anonymity to discuss sensitive diplomacy, said he did not believe that coercive measures like sanctions would have much impact on Mr. Abiy’s government.

The European Union was seeking a new approach that combined carrots with sticks, he said, although not all European countries had agreed on that course of action.