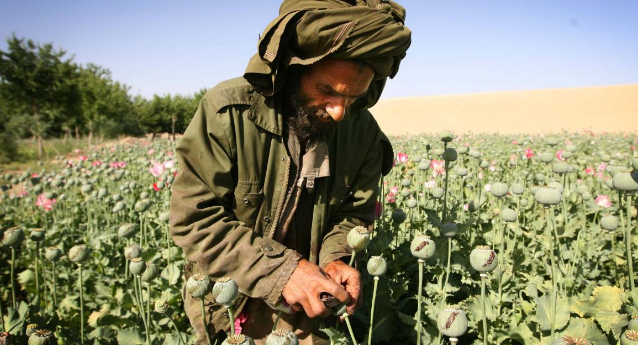 Helmand, the main opium cultivating province in Afghanistan, has no plans to stop growing the crop that supplies most of Europe’s heroin, even though the Taliban promised to outlaw it.

Abdul Ahad, 45, the provincial governor, who is known to the Taliban as Talib Mawlawi, said that it was up to the rest of the world to find another income for farmers before it could be banned.

Last month Taliban officials are said to have met villagers and told them that growing poppies would be forbidden. On August 18 Zabiullah Mujahid, the Taliban spokesman, said that the new administration would “bring opium cultivation to zero again”, adding: “From now on nobody is going to get involved [in the heroin trade], nobody can be involved in drug smuggling.”

However, Ahad said: “We know this region is the centre of narcotics cultivation but families here rely on it. We’ve spoken to farmers and we’ve told them they can continue cultivating the crop and we will see what the central government says in the future.”

Afghanistan is the biggest opium producer in the world, according to the United Nations Office on Drugs and Crime, accounting for more than 80 per cent of supply. It also made up 11 per cent of Afghanistan’s economy in 2018.

With the guarantee of such a huge income from the crop, the new government will find it impractical to force farmers to switch to alternative crops, according to US intelligence sources, and any ban would be unlikely to last.

Since 2002 the US has spent nearly $9 billion on combating the drug trade, initially focused on compensated eradication, before trying to persuade farmers to switch to wheat and cereals. Like attempts by MI6, they failed to make much impact. Banning opium poppy cultivation would hit the poorest families and generate anger against the Taliban. The group faced the same dilemma in 2000. They stopped poppy cultivation in 2000 after they came to power in 1996, claiming it was contrary to the Islamic faith, the US intelligence sources said. But it was only for a short time and they soon brought it back and relied on the income when they were overthrown in 2001.

Throughout the war with the US-led coalition, the opium trade provided the Taliban with income for weapons as well as for paying their 70,000 fighters, some of them foreigners.

With international aid scrapped and bank accounts frozen, Taliban finances would be in an even worse state if they brought the drug trade to a halt.

Poppy cultivation rose by 37 per cent over 12 months, according to a UN survey carried out last year. Of the 34 provinces 22 were involved in poppy cultivation last year, generating 6,300 tons of opium at a farm gate value of $350 million, the report said. The record opium production was set in 2017 with 9,900 tons valued at about $1.4 billion.

The Taliban were the main beneficiaries of the trade, including charging smugglers a 10 per cent tax for shipments bound for Europe, Canada, Africa, Russia and elsewhere in Asia. Estimates put the Taliban’s annual income from the illicit drug trade at between $100 million and $400 million.

Although only 1 per cent of the US heroin supply comes from Afghanistan, 95 per cent of Europe’s heroin is supplied by opium grown there.

A cultivation boom is not only a concern in the West; addiction has become a chronic issue in Afghanistan. At least a tenth of its 36 million people are addicted to drugs, according to its National Drug Use Survey.

The last time the Taliban were in charge drug users were arrested and punished, but the new administration is taking steps to provide rehabilitation, of sorts. Following last month’s decision to release thousands of prisoners from jails, Kandahar’s dark and dingy prison cells are no longer filled with hardened criminals, instead its occupants are a few hundred addicts who the Taliban have arrested to help “get clean”.

Mansour Molawi, deputy head of the prison, said that there was a problem getting food to the detainees as well as problems with the water and electricity supply, but said: “We are trying our best to resolve all issues”. The stench of human waste permeates the corridors.

The 365 men who have been arrested for drug use are skinny and shaven headed and many are toothless. A room of about 20 men in dirty clothes and blackened feet say they are glad to have been “given another chance” despite the conditions they are festering in.

Dilawar, 20, a regular user of heroin and methamphetamine, has been in the prison for nearly a month. “The first few days were quite awful. The body aches were the worst, I couldn’t eat. Things got better and now I’m eating a lot and praying five times a day. The Taliban have given us a chance at a new life.”

Taliban officials say the strategy is to clean up the streets to reduce crime and locals acknowledge that the crime rate in Kandahar has dropped a lot.

However, Dr Naqib Kamal, who has worked in the prison for three months, said: “We don’t have the kind of medicine needed by drug users going through withdrawal. These people have completely different psychological needs as they can go through depression or they can become schizophrenic if not treated correctly.”

Previously he worked at Kandahar’s one specialist drug rehabilitation centre, the 70-bed Malalai Clinic. Under the previous regime there were plans for a women’s ward at the clinic but there has been no word on it.

Mirwais Ahmad, administrative director of the clinic, said: “I have no idea about the facilities in the prison but . . . if they do not receive the correct treatment they are at risk of serious mental health problems and even death.