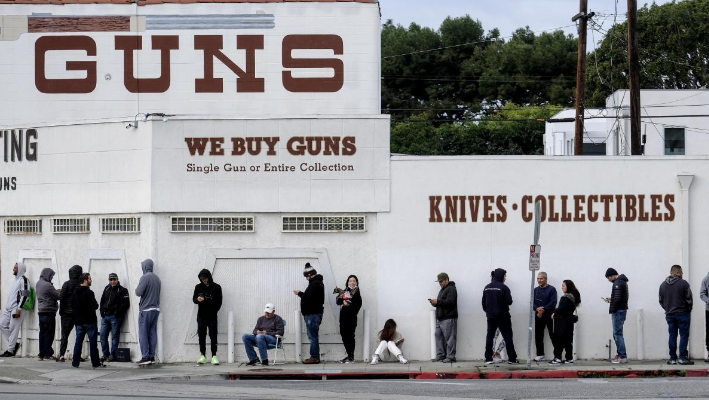 A rise in gun sales across the US has left the police and most other regular users of firearms desperately short of ammunition.

More than eight million people bought a gun for the first time last year, according to the National Shooting Sports Foundation, with many spurred on by lockdown orders, the slower police response times, and a surge in gun violence in many cities across the US. The result was “overwhelming demand” for guns and especially bullets, Mark Oliva, the trade body’s spokesman, said.

“When you talk about all these people buying guns, it really has an impact on people buying ammunition . . . if you look at 8.4 million [new] gun buyers and they all want to buy one box with 50 rounds, that’s going to be 420 million rounds,” he told the Associated Press. A total of 20 million guns were sold to customers across America last year, he added.

The rise in demand has led to a chronic shortage of bullets and makers say that they are unable to meet demand, meaning shelves are emptying and prices are rising.

The shortage is proving to be problematic for the new owners of firearms. “We have had a number of firearms instructors cancel their registration to our courses because their agency was short on ammo or they were unable to find ammo to purchase,” Jason Wuestenberg, the executive director of the National Law Enforcement Firearms Instructors Association, said.

The problem is no less acute for the police. “We have made efforts to conserve ammunition when possible,” Larry Hadfield, a spokesman for the Las Vegas metropolitan police department, said.

The US military produces its own ammunition at six sites across the country and is unaffected by the wider shortages.

The US is struggling to contain an increase in gun violence. Ten people, aged between 19 and 72, were shot and injured in the Queens district of New York when two men opened fire on a crowd at the weekend. A fortnight ago a six year-old girl on a scooter was shot and killed during a drive-by shooting in Washington.

President Biden has described the situation as a national shame and has promised tighter regulations on the sales of firearms and greater background checks.

According to the FBI’s background check database, in 2010, there were 14.4 million checks for gun purchases. That increased to almost 39.7 million in 2020 and to 22.2 million in the first six month of this year.