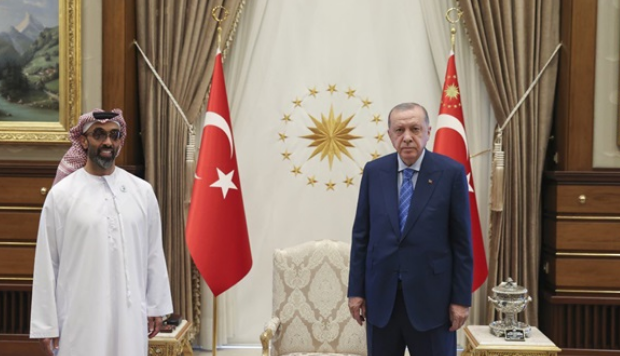 As Turkish media highlighted, Erdogan indicated, following his meeting with Al Nahyan, that the UAE would pour new investments in Turkey soon.

He told reporters that he had a discussion with the senior UAE official about the type of investments that can be made in all fields.

Asked about whether Al Nahayan’s visit portends a thaw in relations between Turkey and the UAE, Erdogan said such visits can bring about changes between countries.

‘So far, we have reached a certain point by holding some meetings with the administration of Abu Dhabi, especially our intelligence service,’ Erdogan said.

He expected to hold a meeting with Abu Dhabi Crown Prince, Mohamed bin Zayed, in the coming period.

‘I hope to meet him after today’s meeting, and through these meetings, I hope we can overcome some problems in the region as members of the same culture and the same religion,’ Erdogan said.

‘We care about the main actors in the region talking directly to each other, negotiating and solving their own problems together,’ he added.

Gargash said the UAE official held a historic and positive meeting with the Turkish president.

‘Economic cooperation and partnerships were the main focus of the meeting,’ he wrote on Twitter.