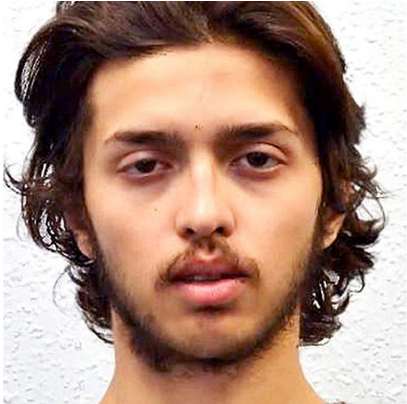 Police tried to stop the release of a terrorist who seemed “intent” on violence and went on to carry out a knife attack after he left prison, an inquest has been told.

Before his release Sudesh Amman told a fellow inmate he was “not finished with these non-believers yet”, and prison officers had earlier found a pledge of allegiance to Islamic State in his cell.

The intelligence was passed to the Metropolitan Police, which tried to keep Amman, 20, behind bars but the prison authorities said there was nothing they could do, the hearing was told.

Amman was shot dead by undercover officers in Streatham, south London, ten days after his release when he stabbed two members of the public. He was under 24-hour surveillance on February 2 last year when he ran into a shop, stole a kitchen knife and went on a 62-second rampage along the high street.

He had been released on January 23 after serving two thirds of his sentence for possessing material useful for terrorism and disseminating terrorist material online. Police were concerned about his apparently unrepentant behaviour in HMP Belmarsh, southeast London. Rob Davis, the prison governor, turned down the police request to not release him because the offence Amman was jailed for could not justify an extension of his sentence.

At the inquest, which opened at the Royal Courts of Justice in central London yesterday, Jonathan Hough QC said: “While in prison he appeared to retain an extremist mindset and appeared still intent on carrying out acts of violence on his release. He also seemed to feel he had celebrity status as a result of being convicted of terrorist offences.”

A search of his cell in 2019 uncovered handwritten notes in Arabic that “appeared to show a pledge of loyalty to the leader of Islamic State”, Hough said. On January 3 last year he was involved in a protest about the death of another prisoner in custody and jumped on the netting between landings at Belmarsh.

As a result he was moved into the segregation unit. Amman was charged with endangering the lives of others by jumping on the nets and Detective Chief Superintendent Alexis Boon wrote to Davis eight days before Amman’s release expressing his concerns.

Davis wrote back to say that Amman, of Harrow, northwest London, was entitled to release on January 23, without approval from the parole board, and it would not be possible to arrange independent adjudication before then.

After his release, MI5 and the Metropolitan Police placed Amman under day-time surveillance by plain-clothes officers between January 24 and 28 because of concern that he might commit another offence. On January 29 a decision was made to allow those officers to carry firearms.

Detective Superintendent Dominic Murphy said that there were further concerns on January 31, when Amman was seen looking at tools in a shop and buying brown tape, four bottles of Irn-Bru and aluminium foil from Poundland. Officers thought the items could be used to make a fake suicide vest.

Surveillance was stepped up further and when Amman left his probation hostel on February 2 he was followed by nine officers, including one on a motorbike. The others were in cars and on foot. They gave chase when he grabbed a 20cm carving knife from a store and stabbed a man in the torso, and a woman in the back. Both survived.

Officers shot at Amman six times but only two rounds hit him. One round shattered the shop front of a Lidl supermarket during the chase up the crowded road.