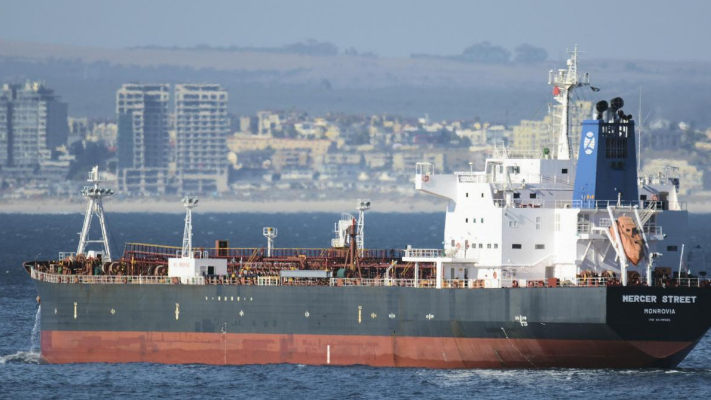 Iran’s ambassador to London was summoned to the Foreign Office today in formal protest at an “unlawful and callous” drone attack on an oil tanker which killed a British guard, as Boris Johnson called on the country to “face up to the consequences” of what he condemned as an “unacceptable and outrageous” action.

The prime ministers words came as Britain and the United States joined Israel in blaming the attack on Iran and began discussions over a “concerted response” to the attack in the Arabian Sea.

A defence source said there was “no doubt” that Iran was behind the attack, rather than any proxies in the region, despite Tehran’s denials.

Iran vowed today to respond to any “adventurism” and accused Israel of “baseless accusations”. Saeed Khatibzadeh, the foreign ministry spokesman, called the British and American statements “contradictory” and said: “If they have any evidence to support their baseless claims, they should provide them.”

When asked whether the UK would consider military action as part of its response to the attack, the prime minister said: “I think that Iran should face up to the consequences of what they have done, accept the attribution that the foreign secretary has made.

“This was clearly an unacceptable and outrageous attack on commercial shipping, a UK national died. It is absolutely vital that Iran and every other country respects the freedoms of navigation around the world, and the UK will continue to insist on that.”

The MT Mercer Street, a tanker managed by Zodiac Maritime, which is owned by the Israeli billionaire Eyal Ofer, was attacked on Thursday off Oman, killing a British security guard and a Romanian crew member. Britain and the US blamed a drone attack.

The explosion is being treated as the latest in a series of tit-for-tat strikes between Israel and Iran, not targeted intentionally at Britain. But the death of a British guard heaped pressure on the government to respond after Israel passed on its public and private conclusion that Iran was to blame.

The security guard who died has not been identified. He worked for Ambrey, a maritime security company based in Hereford, which said that it was working closely with “all relevant authorities” and was offering “all the support possible to the victim’s next of kin”.

The Ministry of Defence is sending a small team of investigators to the ship to gather evidence and assess the technology used in the attack. “It is a crime scene so they have to go and establish what they can from the strike, including more information about what technology was used,” the source said.

Dominic Raab, the foreign secretary, said last night it was “highly likely” that Iran was behind a “targeted” strike by one or more drones that crashed into the tanker MT Mercer late on Thursday. The explosion is being treated as the latest in a series of tit-for-tat strikes between Israel and Iran.

“The UK condemns the unlawful and callous attack committed on a merchant vessel off the coast of Oman,” Raab said. He added that it involved one or more unmanned aerial vehicles.

“Our thoughts are with the friends and family of those killed in the incident,” he said. “We believe this attack was deliberate, targeted and a clear violation of international law by Iran.

“Iran must end such attacks and vessels must be allowed to navigate freely in accordance with international law. The UK is working with our international partners on a concerted response to this unacceptable attack.”

Raab’s statement is understood to have followed a telephone call between General Sir Nick Carter, the chief of the defence staff, and Aviv Kochavi, head of the Israel Defence Forces. Naftali Bennett, the Israeli prime minister, had insisted earlier that he knew with “absolute certainty” that Iran was behind the attack.

Antony Blinken, the US secretary of state, called for a joint response after talking to Yair Lapid, the Israeli foreign minister. He said: “We are working with our partners to consider our next steps and consulting with governments inside the region and beyond on an appropriate response. Upon review of the available information, we are confident that Iran conducted this attack.”

The drone strike comes days before Ebrahim Raisi, a former chief judge known as the Butcher of Tehran, takes office as president of Iran. The country’s talks with world powers over restoring a nuclear non-proliferation deal appear to have stalled.

Bennett told a cabinet meeting yesterday that “intelligence evidence exists” to back up his claims. He called on international powers to make it clear that Iran had “made a serious mistake”. He added: “We know how to send a message to Iran, in our own way. Iran’s aggressive conduct is dangerous not only to Israel, but also harms global interests, freedom of navigation and international trade.”

Tehran said that it would “not hesitate to defend its interests” if attacked. Khatibzadeh said that Israel “must stop such baseless accusations”. Despite official denials, Iranian broadcasters quoted “informed sources” on Saturday as saying that the attack had been in revenge for Israeli airstrikes in Syria last week.

The tanker is thought to have been targeted because it is managed by Zodiac Maritime.

The security guard who died has not been identified. He worked for Ambrey, a maritime security company based in Hereford, which said that it was working closely with “all relevant authorities” and was offering “all the support possible to the victim’s next of kin