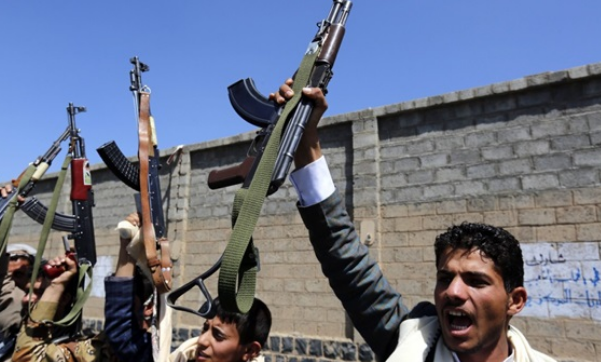 The Houthi coup militia continues to distort the educational process in Yemeni provinces and cities under its control.

It spreads its extremist ideology and imposes exorbitant tuition fees on pupils.

The militia also puts the pictures of Houthi military leader on the covers of school textbooks to consolidate Houthi presence in the minds of the pupils.

Yemeni activists published recently the picture of a cover that they said was the national education subject for the eighth grade.

The pictures of a prominent Houthi military commander, called Brigadier General Hassan al-Malasi, were printed on the cover of the book.

Al-Malasi carried an RPG launcher in the pictures. He was snapped while leading one of the battles of the Houthi militia against the Arab coalition forces in the Najran border front.

Yemeni media revealed that the printing presses of the Houthi militia in the capital, Sana’a, had printed the pictures of Hassan al-Malasi.

This stirred up controversy within Yemeni circles, as supporters of the ideology of the militia expressed support for this step.

They claimed that it was a ‘wonderful gesture’ from the Houthis.

‘This is the least that can be offered a field military commander the size of al-Malasi,’ one of these supporters said.

On the other hand, rejectionists said the printing of the man’s pictures on the coves of school textbooks was an attempt by the Iranian-backed militia to distort the school curricula in areas under its control.

This is especially true, they said, with the Houthis trying to emulate Iran’s mullahs who are known for having an obsession with putting the pictures of their leaders on the walls in educational and cultural institutions.