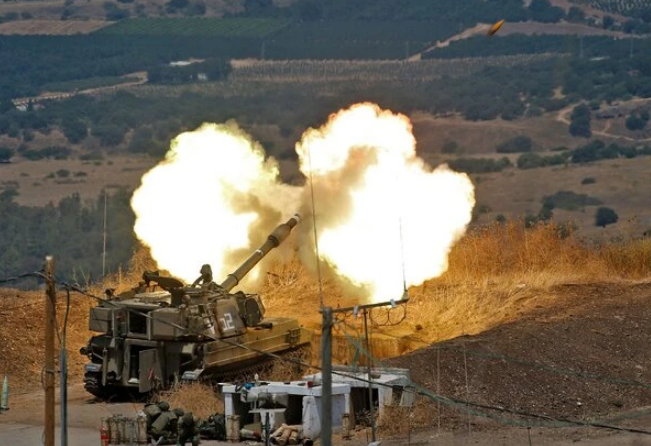 Hezbollah Fires Rockets at Israel as Risk of Escalation Looms

Hezbollah, the Iran-backed Lebanese militant group, claimed responsibility for firing a volley of rockets over Israel’s northern frontier on Friday, the latest in a spate of tit-for-tat cross-border attacks that have ratcheted up regional tensions.

The salvo was significantly larger than a few previous rocket launches from Lebanon in recent weeks, and the first to be claimed by Hezbollah in many years. On Friday afternoon, Israel’s political and security leaders held consultations about how to respond.

The hostilities were the most recent in a long shadow war between Israel and Iran and its proxies by land, air and sea, which has increasingly flared into the open.

Tensions between Israel and Iran’s allies have been further heightened by expectations that Israel may soon retaliate for an attack last week on an Israeli-linked merchant ship in the Indian Ocean. The two countries have repeatedly attacked each other’s ships at sea over the past two years; in particular, Israel has targeted Iranian vessels carrying fuel or weapons from Iran to its allies.

Israel and several major powers have blamed Iran for the attack last week, which killed two foreign nationals aboard the ship — a Romanian officer and a British security guard. On Friday the foreign ministers of the United States, Britain, Japan, Canada, Germany, France, Italy and the European Union issued a joint statement condemning what it called “a deliberate and targeted attack,” adding that “all available evidence clearly points to Iran.”

The U.S. military’s Central Command on Friday released a report on its investigation into the episode, stating that the ship, the Mercer Street, was hit on July 30 by an Iranian-made aerial drone “loaded with a military-grade explosive,” damaging the vessel and killing the two victims. It said that two other drones had targeted the ship the day before but missed, striking nearby.

“Explosives experts were able to recover several pieces” of the drone that hit the ship, the report said, “including a vertical stabilizer (part of the wing) and internal components which were nearly identical to previously-collected examples from Iranian” aerial drones.

Israel has been calling for more of an international response, and significant preparations have been underway for an Israeli military response against Iran for the attack on the ship, according to three Israeli officials with knowledge of the decision-making process on national security issues, and who asked not to be named when discussing sensitive operational topics.

Despite the heightened tensions between Israel and Iran across the Middle East, both Hezbollah and the Israeli military indicated a desire to avoid escalation and seemed to be trying to defuse the situation. But the Israeli military also said it would not allow attacks to go on unhindered along the border.

“We do not wish to escalate to a full war, yet we are very prepared for that,” said Lt. Col. Amnon Shefler, an Israeli military spokesman.

The Israeli military said that 19 rockets had been fired from Lebanon and 10 were intercepted by Israel’s air defense system while others landed in open areas. There were no casualties or damage reported on either side, and Israel said it struck back at the rocket launch sites inside Lebanon.

The Israeli military said civilian life along the border could go on as normal and tourist attractions remained open, signaling an expectation that no other major action was imminent at a time when many Israelis are vacationing in the north.

Hezbollah also signaled that its rocket salvo was not intended to break the current balance, noting in a statement that its fighters had fired tens of rockets at open land near Israeli sites in a disputed border area known as Shebaa Farms.

Shebaa Farms — known in Israel as Mount Dov — is a strip claimed by Israel, Lebanon and sometimes Syria near the intersection of all three nations, adjacent to the Golan Heights.

Those strikes came after militants fired rockets into Israel on Wednesday for the second time in two weeks. The last few rocket attacks from Lebanon have been attributed to rogue Palestinian groups.

In an embarrassing turn of events for Hezbollah, which prides itself on the secrecy of its military operations, angry residents of a village in southern Lebanon stopped one of the rocket crews after it had fired, filmed videos of a launcher in the back of a pickup truck and posted the images on social media.

In other videos seen by The New York Times, residents belonging to the Druze sect in the village of Chouya dragged Hezbollah members from their cars, hit them on their heads and shouted at them.

Two residents said in phone interviews that the villagers had heard the launch near their village and went to attack the crew because they were worried the outgoing rocket fire would bring Israeli retaliation on their community.

Both spoke on condition of anonymity for fear of reprisals from Hezbollah.

In social media comments on the videos, some Lebanese criticized Hezbollah for risking a new war with Israel while the country suffers through a profound economic crisis.

“No medicine, no diesel, no hospitals. The situation in the country is bad. There is no government, the army is tired, so why this timing for a war?” wrote one person.

Another asked why Hezbollah did not fire rockets from its stronghold in the southern suburbs of Beirut.

Hezbollah acknowledged that some of its fighters had been stopped in the village.

The Lebanese Army said that it had arrested four people in Chouya who had fired rockets and seized their launcher.

Colonel Shefler, the Israeli military spokesman, said that Hezbollah’s claim of responsibility on Friday was likely aimed at showing that the organization still has control over the border area in southern Lebanon and that the Israeli airstrikes would not go unanswered.

The tanker Mercer Street in 2016 off the coast of South Africa. It was attacked last week near Oman.Credit…Johan Victor, via Reuters

Zvika Haimovich, a retired Israeli general and former air force commander, said that both Hezbollah and Israel were trying to act within the established formula of recent years and that it was in Israel’s interest to keep its border with Lebanon quiet and “keep Lebanon out of the game.”

But given what he described as the advancement of Hezbollah’s Iran-backed program to develop precise missiles in Lebanon, Mr. Haimovich added, “We are close to a point where Israel will have to act against Hezbollah in Lebanon,” and that the events of the last few days brought that point even closer.