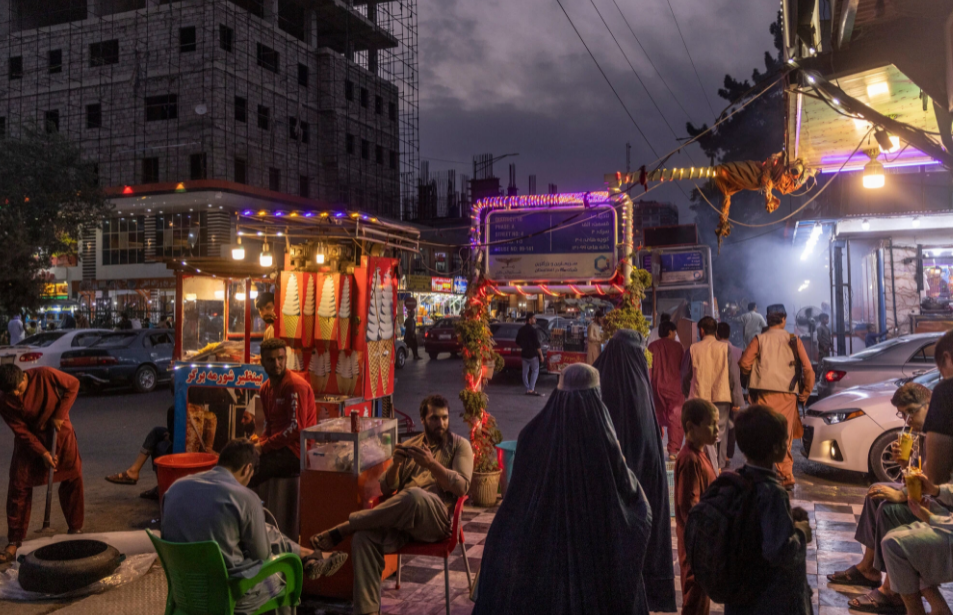 As the Taliban attempt the precarious shift from insurgent movement to functioning government, Afghanistan is facing the heightened risk of a financial collapse after being propped up for the past two decades by foreign aid that now accounts for nearly half its legal economy.

The fate of the Afghan economy will be determined by decisions that the Biden administration and other countries must make on whether to recognize the Taliban as a legitimate government. In the meantime, the United States and the international community are already shutting the flow of money, leaving Afghanistan in the stranglehold of sanctions that were designed to cut the Taliban off from the global financial system. Analysts say the looming shock threatens to amplify a humanitarian crisis in a country that has already endured years of war.

Signs of strain were evident this week as the value of Afghanistan’s currency, the afghani, plunged to record lows and the nation’s most recent central bank governor, Ajmal Ahmady, warned that inflation would likely send food prices soaring. The United States, which has poured about $1 trillion into Afghanistan over 20 years, moved to block the Taliban’s access to Afghanistan’s $9.4 billion in international reserves. And the International Monetary Fund suspended plans to distribute more than $400 million in emergency reserves to the country.

“In the short term, it’s potentially catastrophic,” said Justin Sandefur, a senior fellow at the Center for Global Development. “You’re looking at the possibility of the currency collapsing and a financial crisis that could inflict real pain on normal people.”

Afghanistan’s economy was facing severe challenges, and international support was starting to wane, even before the Taliban takeover.

The drawdown over the last year of American forces and government contractors that contributed to Afghanistan’s tax base sapped revenue when the country, like much of the world, was coping with the coronavirus pandemic. The Congressional Research Service noted this year that 90 percent of Afghanistan’s population lived on less than $2 a day and warned that the loss of American support would weaken one of the world’s smallest economies.

Daily business updates  The latest coverage of business, markets and the economy, sent by email each weekday. Get it sent to your inbox.

In late 2020, foreign donors meeting in Geneva pledged $12 billion in aid to Afghanistan over the next four years, a 20 percent decline from the previous four years. Some of the aid agencies based new conditions for the money on human rights advances and progress with peace talks between the government and the Taliban.

Concerns about food insecurity are mounting, and a looming drought is expected to make matters worse.

“The withdrawal of U.S. troops or reductions in international grant support to the Afghanistan security forces would have a range of unpredictable impacts on security, political cohesion and the economy,” the World Bank wrote in its Afghanistan Development Update, published in April. “Fiscal space remains tightly constrained in the context of weakened revenue performance and declining international grants.”

Although Afghanistan’s budget deficit has been relatively low as a share of its economy, the World Bank warned that the country was at “high risk of external and overall debt distress” because of its reliance on foreign grants and low exports.

The World Bank, which has provided more than than $5.3 billion for development and emergency reconstruction projects in Afghanistan since 2002, evacuated members of its staff and their families from the country to Islamabad, Pakistan, this week. A World Bank spokesman had no comment on the future of its work in the country.

Paul Cadario, a former World Bank official, suggested that a key issue was whether the Taliban would be able to deliver on the infrastructure projects that foreign development groups had been funding and to maintain public services to create a functioning economy. However, he said, it remains uncertain whether the Taliban will allow the work on projects related to public health and education to continue, and the status of basic institutions like tax administration remains in limbo.

“Presumably some of what the government does will be paid for by the Taliban with money from other sources of income like opium,” said Mr. Cadario, who is a fellow at the University of Toronto’s Munk School of Global Affairs and Public Policy.

A United Nations report in June underscored the Taliban’s lack of economic credibility, detailing how their financing is derived from criminal activities such as drug trafficking, opium poppy production, extortion, kidnapping for ransom and mineral exploitation. It estimated that the group’s revenues from those practices amounted to somewhere between $300 million and $1.6 billion a year.

Alex Zerden, the Treasury Department’s financial attaché at the U.S. Embassy in Kabul from 2018 to 2019, said the United States would have to quickly decide how to untangle its financial ties with Afghanistan.

Congress appropriated $3 billion to the Afghanistan Security Forces Fund for 2021, and the Biden administration had requested more money for next year. The Taliban are also likely to press for access to the country’s reserves that are being held in the United States.

“I think this is going to be a looming issue between the United States, international partners and the Taliban government about the future of these funds,” Mr. Zerden said.

Any move to release the funds is likely to be met with fierce political resistance from Republicans. A group of Republican lawmakers urged Treasury Secretary Janet L. Yellen this week to stop the International Monetary Fund from giving the Taliban access to emergency currency reserves. Separately, House Republicans wrote to the Special Inspector General for Afghanistan Reconstruction asking whether ongoing assistance to Afghanistan is legal and in the interest of the United States.

Biden administration officials have said that they are carefully watching the actions of the Taliban and that it is premature to say if the United States will recognize the new government as legitimate.

The most powerful leverage that the United States and the rest of the world hold against the Taliban are sanctions, which have been employed aggressively to starve the group of financing and curtail the ability of its leaders to travel. A 2020 agreement between the Trump administration and the Taliban called for a review of U.S. sanctions against the Taliban with the goal of removing them, but the group’s toppling of the Afghan government makes this less likely.

“Afghanistan now emerges into the international community into a sea of sanctions that are tied to the Taliban dating back to 9/11,” said Juan C. Zarate, who was the first-ever assistant secretary of the Treasury for terrorist financing and financial crimes. “Sanctions will be a defining barrier to both legitimacy and commercial activity with the Taliban and Afghan entities and the economy.”

The Treasury Department had no comment about whether it had started to review sanctions on the Taliban. Although sanctions have been blamed for inflicting pain on civilians in places such as Venezuela and Iran, the United States often makes exceptions, through general licenses, to allow certain kinds of transactions on humanitarian grounds.

Any sanctions that are placed on Afghanistan will be more painful than those that the United States has imposed on Iran, which has a far more sophisticated economy and has managed to evade restrictions and continue to export hundreds of thousands of barrels of oil each day.

The United Nations Security Council has also imposed sanctions on the Taliban, making it even more complicated to reverse them even if countries such as China and Russia want to do business with Afghanistan. Aid groups and nongovernmental organizations will have difficulty operating in Afghanistan while the sanctions are in place.

Mr. Zarate said that the sanctions on the Taliban would probably be removed only if the group changes its behavior, but that its history of human rights abuses and reliance on illicit finance made that unlikely.

“I imagine the thicket will get worse rather than better,” Mr. Zarate said, suggesting there will be calls in the United States to impose more sanctions. “There’s not going to be a lot of sympathy.”