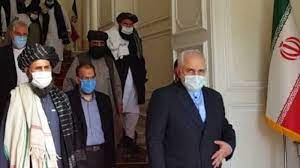 Taliban and Iran: Mutual and pragmatic interests on both sides despite hostility (Part 2)

In the previous episode, the Reference reviewed the stages of the confused relationship between Iran and the Afghan Taliban movement, which in most of its stages was closer to hostility, especially in light of the role played by Iran in bringing down the Taliban government in cooperation with the United States, in addition to the Iranian support for opposition movements against the Taliban government. Although they then searched for common ground after that for consensus between the two sides, which was headed by confronting their shared enemy, represented in the United States, in addition to Iran entering the crisis line in Afghanistan and then playing the role of mediation, albeit informally, between the terrorist movement and the Afghan government and holding meetings between the two parties in Tehran.

Despite this confused relationship in most of its phases and the ideological hostility between the Shiite mullah regime and the Sunni movement, there remain some shared of the two parties to reach an understanding about entering into harmonization and overcoming differences as much as possible to achieve important gains, or at least an understanding on several files.

Despite the Iranian regime’s ideology, this does not stand in the way of achieving its interests, which has been monitored for many years, for example through its relationship with al-Qaeda, which is considered Sunni in sectarian terms, and with ISIS, which, despite its fighters and militias, Tehran used in both Iraq and Syria.

To achieve these interests, cooperation between Iran and the Afghan movement took place during periods in which Tehran hosted Taliban leaders, and this relationship reached the point of military support, as the mullah regime provided the movement with weapons and ammunition and trained its elements, in addition to recruiting a number of Afghan youths residing in Iran, even succeeded in recruiting some elements of the Revolutionary Guards into the ranks of the movement, which was repeatedly proven and confirmed by Afghan police investigations. The success of the Afghan police in liberating any area from the movement’s control is followed by the discovery of quantities of weapons and mines made in Iran.

The economic interests of the two sides remain the most important issues that they seek to reach an understanding about, especially in light of the US sanctions on Iran, which led to the deterioration of its economy, prompting Tehran to search for an outlet to smuggle oil and minerals to reduce the losses due to the sanctions. Afghanistan was an important outlet for Iran to face the repercussions of the sanctions. At a time when the Taliban’s dominance over Afghan lands and control of important border crossings is increasing, Iran is becoming increasingly aggressive about movement and making understandings with them.

Reports have confirmed that illegal transfers of agricultural and industrial goods between Iran, Pakistan and Afghanistan have become a regular phenomenon across the borders of the three countries. Estimates vary about the size of this illegal trade in terms of quantities and estimated monetary value, at a time when smuggling along the Iran-Pakistan border has been a profitable activity for years, especially the oil trade.

The National Iranian Oil Company (NIOC) has companies in Afghanistan and in other countries that market and sell oil on behalf of Tehran, but in limited quantities, not exceeding 300,000 barrels per day, and at prices below the official price by $5 to $10, which led to Iran’s ability to coexist with the sanctions.

Another important economic file that concerns both sides is Afghan labor in Iran, which represents an important pillar in Afghan-Iranian relations, especially since with the exacerbation of the economic crisis in Iran, when Afghan labor began to leave Iran, which has a negative impact on the flow of remittances to Afghanistan and even impedes the ability of the Afghan government to enforce its procedures and provide its services.