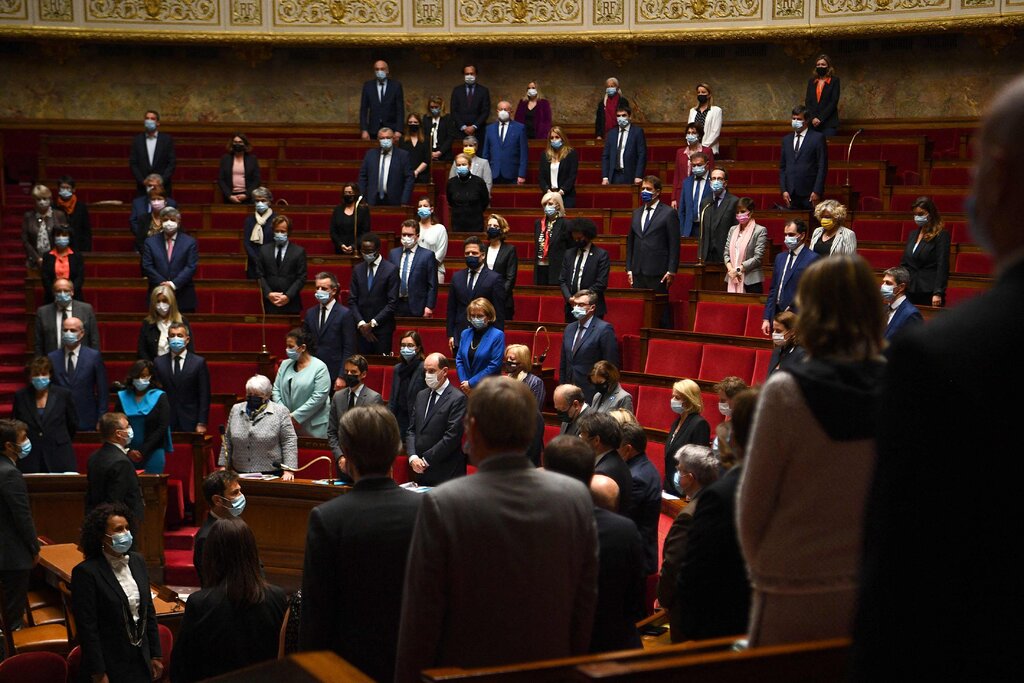 French lawmakers have adopted two bills the government says will strengthen its ability to fight terrorism and Islamist extremism following a series of attacks that have hardened feelings of insecurity ahead of next year’s presidential election.

Debate on the bills, adopted Thursday and Friday, had been pushed out of the headlines by a flare-up of the Covid-19 pandemic, but critics say they curtail civil liberties and extend police powers to a worrying degree.

One of the new laws gives France’s security services more tools to keep track of suspected terrorists and surveil them online; it was adopted late Thursday by the National Assembly, the lower house of Parliament, by a vote of 108 to 20.

The other, passed on Friday by the same chamber by a vote of 49 to 19, aims to combat extremist ideas at every level of French society. Among a range of steps, it toughens conditions for home-schooling, tightens rules for associations seeking state subsidies, and gives the authorities new powers to close places of worship seen as condoning hateful or violent ideas.

Both measures had been pushed by President Emmanuel Macron and his government as necessary responses to a persistent threat posed by Islamist extremism against France’s ideals, especially secularism, and its security.

“We are giving ourselves the means to fight against those who misuse religion to attack the values of the Republic,” Gérald Darmanin, France’s interior minister, said on Twitter.

In the past year, people identified as Islamist extremists fatally stabbed a police officer, killed three people at a basilica in Nice and decapitated a schoolteacher near Paris who had shown cartoons of the Prophet Muhammad during a class discussion on free speech. As recently as this week, the government told the authorities around the country to be on high alert after Al Qaeda issued a video threatening France over those cartoons.

Opponents on the right, where politicians jostling to be candidates in next year’s elections have made security a key issue, say the two laws don’t go far enough. Human rights groups and critics on the left say that the measures are heavy-handed and that Mr. Macron’s government has shifted toward increasingly repressive policies.

Anne-Sophie Simpere, an advocate for Amnesty International, said that the antiterrorism law, like others before it, was too broad and too vague, raising worries it could be misapplied.

“Often one of the government’s arguments is that these restrictive measures were used reasonably,” she said. “But these tools are here to stay, regardless of which government is in power, and there is a lot of room for interpretation.”

The measure on Islamist extremism had been bitterly debated in Parliament over the past few months, especially in the Senate, the upper house that is dominated by the right.

There, lawmakers voted on a flurry of amendments that critics said were patently anti-Muslim or xenophobic but did not figure in the final version of the bill. Those proposals had included a ban on veils for parents accompanying children on school outings.

The antiterrorism law enshrines and extends measures that were first introduced on an experimental basis in a sweeping 2017 counterterrorism bill. Among other things, it grants the security services the authority to surveil and restrict the movements of people who had been imprisoned for terrorism for an extended period after their release. The law also allows the security services to use computer algorithms that automatically process data from phones and web addresses to detect potential suspects.

The law on Islamist extremism is wide ranging, with a raft of measures that seek to root out what the government sees as the sources of extremism in every corner of French society. Critics like Jean-Luc Mélenchon, the head of the far-left France Unbowed party, say instead that the steps are cover for “anti-Muslim” bias.

The law changes the rules governing home-schooling by making it mandatory for parents to seek authorization from the state — previously, parents needed only to officially declare their intentions — and by restricting the reasons that would warrant such an authorization.

Educating children at home, which is not widespread in France, is viewed by the government as a possible source of the “separatism” that it says undermines French values, for instance by giving conservative Muslim families a way to keep their children out of public schools.

The law also extends strict religious neutrality obligations beyond civil servants to anyone who is a private contractor of a public service, like bus drivers. It makes associations seeking state subsidies sign a commitment to “respect the principles and the values of the Republic.” And, it bans health professionals from issuing “virginity certificates” before religious marriages.

One article of the new law, added after the decapitation of the schoolteacher — whose killing came after videos criticizing him widely circulated on social media — criminalizes the act of publishing someone’s private information online if there is clear intent to put them in harm’s way.

The law also creates a new crime of “separatism,” with punishments of up to five years in prison and fines of up to 75,000 euros, or $88,000, for people who threaten or assault an elected official or civil servant because they don’t want to follow rules governing French public services — for instance if someone becomes violent at a public hospital because they refuse to be examined by a female doctor.

Some lawmakers have already warned that they will file a motion with France’s Constitutional Council to verify that the new measures comply with the French Constitution, meaning that some could be struck down. Key sections of another security law passed in April, for instance, were struck down the following month, forcing the government to put forth yet another bill.