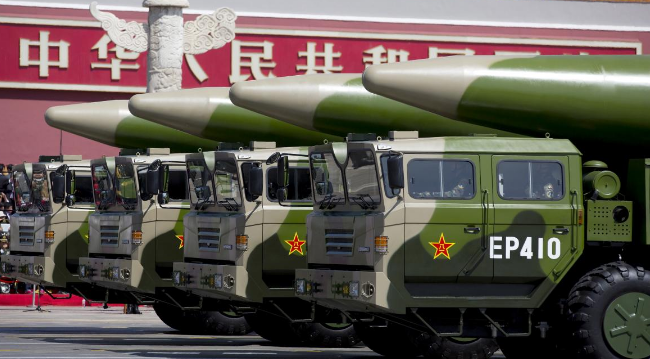 China is building a new nuclear missile base, according to satellite images which provide further evidence that Beijing has embarked on a significant expansion of its arsenal. The new silo complex encompasses an area of about 800 sq km (308 sq miles) in the desert near the city of Hami in the east part of the far western region of Xinjiang, not far from one of the country’s notorious re-education camps for Uighur Muslims. It is being constructed around 240 miles northwest of another missile silo development, which was spotted a few weeks ago near the ancient Silk Road city of Yumen, also deep in the country’s interior. The two new sites constitute “the most significant expansion of the Chinese nuclear arsenal ever”, wrote Matt Korda and Hans Kristensen, researchers at the Federation of American Scientists, who identified the Hami silo field as first reported by The New York Times. With the construction of 120 silos at Yumen and potentially another 110 at Hami, it would amount to a tenfold increase in the number of known ICBM (intercontinental ballistic missile) fixed launch points in China, according to the researchers. “The number of new Chinese silos under construction exceeds the number of silo-based ICBMs operated by Russia, and constitutes more than half of the size of the entire US ICBM force,” Korda and Kristensen said. “The Chinese missile silo programme constitutes the most extensive silo construction since the US and Soviet missile silo construction during the Cold War.” China, which also operates a force of about 100 mobile ICBM launchers, is believed to have a relatively modest stockpile of around 300 nuclear warheads as part of a policy sometimes referred to as “minimum deterrent”, which now appears to now be changing. Admiral Charles Richard, who commands the US nuclear forces, said earlier this year that the Chinese nuclear weapons stockpile was “expected to double, if not triple or quadruple, over the next decade”. Last year, Hu Xijin, an influential editor-in-chief of the Global Times, a party newspaper, argued that the country should expand the stockpile to at least 1,000 nuclear warheads. “We need a larger nuclear arsenal to curb the US strategic ambitions and impulses against China,” Hu wrote. “It may not be long before we need a very strong will to meet the challenge, and that kind of will cannot be sustained without the support of the DF and JL groups [of nuclear missiles].” “Don’t be too naive to think nuclear warheads are normally useless,” he continued. “We are using them every day and, quietly, we use them to shape the attitudes of the US elite towards China.” “Peaceful coexistence between countries does not come by begging, but it needs to be shaped by strategic tools, especially when we are faced with difficult interactions with an increasingly irrational US, where the other side only believes in strength.” The US and Russia each operate stockpiles of about 4,000 nuclear warheads. The researchers said China’s motives for this expansion could include a determination to underpin its status as a great power and bolster the credibility of its nuclear deterrence to counter the improved capabilities of other nuclear powers such as the US, Russia and India. It has also been suggested that the expansion might be an expensive negotiating ploy by China, which rejected Donald Trump’s proposal last year for a “trilateral arms control initiative” with the US and Russia. The development prompted Washington to raise concerns. Ned Price, a spokesman for the State Department, in early July called the build-up “concerning”. “It raises questions about [China’s] intent,” he said. “And it highlights how [China] appears again to be deviating from decades of nuclear strategy based around minimum deterrence.” Beijing’s military strategy has shifted under President Xi since he came to power in 2012. He has demanded the country build a world-class military capable of defending Chinese interests. Following the reports of the Yumen field development, a government-affiliated blogger who writes under the alias of Ma Shitu accused Washington of exaggerating China’s nuclear threat. “Clearly the US hopes to use the global opinion to restrict China’s building its nuclear powers,” the blogger wrote. “But what we can do is to continue firmly to build up a nuclear power commensurate with our national strategy.”