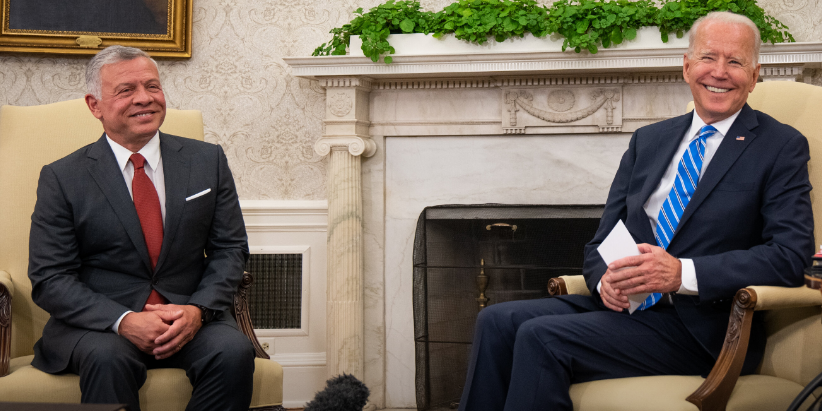 Biden praises Jordan’s King Abdullah as a loyal friend in a ‘tough neighborhood.’

President Biden on Monday praised King Abdullah II of Jordan as a “loyal and decent friend’ as the two leaders met at the White House, a critical visit for a Mideast leader who found himself sidelined under former President Donald J. Trump.

King Abdullah is the first Arab head of state to visit the White House since Mr. Biden took office, a sign that the United States wants to elevate Jordan once again to its traditional role as a regional peacemaker.

“We’ve been hanging out together for a long time,” Mr. Biden said Monday, as the two sat in the Oval Office ahead of their bilateral meeting. “It’s good to have him back in the White House.”

Although Mr. Biden’s foreign policy priorities are heavily focused on China and Russia, the Middle East is a region that the new administration quickly learned it cannot afford to ignore. The visit also comes as Jordan has been struggling amid coronavirus restrictions and as King Abdullah has had to fend off an alleged plot — involving his own half brother — to overthrow him.

During his 22 years in power, King Abdullah has been seen by American presidents as a moderate, reliable ally in the Middle East, often playing the role of envoy from the Arab world in Washington.

That special relationship ended with Mr. Trump, who favored working with Saudi Arabia and the Gulf States instead.

“Trump’s departure is a huge relief to him,” said Martin S. Indyk, a former U.S. ambassador to Israel and a former special envoy for Israeli-Palestinian negotiations.

King Abdullah, for instance, was not consulted on the Trump administration’s Mideast peace plan, which in its original version provided for annexation of the Jordan Valley. And King Abdullah was also worried that American aid to Jordan was in jeopardy during the Trump era.

The United States has been the largest provider of assistance to Jordan since 1994, when Jordan signed a peace treaty with Israel, according to Lucy Kurtzer-Ellenbogen, director of the Israeli-Palestinian conflict program at the United States Institute of Peace.

“As much as this administration has tried not to get consumed by the Middle East, it is very much focused on preserving stability there,” Ms. Kurtzer-Ellenbogen said. “It sees Jordan’s role as key in that and one that was eclipsed in the last few years.”

The king and Mr. Biden have a long friendship that dates back to before King Abdullah assumed power and when Mr. Biden served in the Senate.

King Abdullah, who was accompanied by his eldest son, Crown Prince Hussein bin Abdullah II, noted that he “had the privilege of knowing you with my father decades ago.”

King Abdullah’s father, King Hussein, ruled the country for more than 40 years before his death in 1999. He added, “this is very warming for me to be able to see you in this position.”

Jordan is a small country with limited power in the region, and King Abdullah’s challenge is to connect with more powerful countries, like Egypt and Israel, in order to demonstrate that he can still play a critical role that justifies American support for Jordan. Experts in the region said they expected him to present Mr. Biden with ideas for task forces that could promote a more stable situation in Syria and other parts of the tumultuous region, and new alignments designed to keep Iraq as an ally in the Western world.

King Abdullah’s wife, Queen Rania, did not attend the meeting on Monday, but was scheduled to have tea with the first lady, Jill Biden.

On Monday, Mr. Biden praised the king for his “vital leadership in the Middle East.”

“You live in a tough neighborhood,” Mr. Biden said.