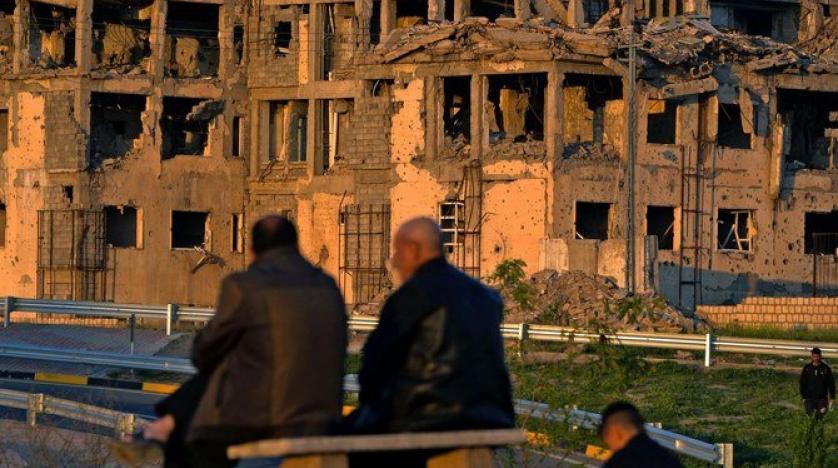 Fear in Iraq’s Mosul as ISIS Families Return From Syria

The return of dozens of Iraqi families suspected of links to the ISIS group from Syria to Mosul has sparked fears among residents who survived the horrors of the terrorist group’s rule.

Around 300 people from some 90 families left the Kurdish-run Al-Hol camp in northeast Syria on Tuesday under Iraqi army escort, a Kurdish administration official told AFP on condition of anonymity.

It was the first repatriation of Iraqi families from the camp, which is home to more than 60,000 people including relatives of ISIS militants, and came as part of an agreement between Baghdad and the multinational coalition battling the militiants.

But the move has stirred up nightmares for many Mosul residents.

For three years, Mosul was the heart of ISIS’s self-proclaimed “caliphate.”

ISIS militants imposed a strict interpretation of Muslim “sharia” law, banning music and smoking and meting out brutal punishments, including public beheadings, for those who violated their rules.

“We are totally opposed to their return,” said Omar, a 28-year-old soldier, whose father was killed by ISIS militant.

“Our future is dark and dangerous because the militants will live near us,” said Omar, who declined to give his surname for security reasons.

Iraq formally declared victory against ISIS in late 2017, a few months after ousting the militiants from Mosul, the capital of Nineveh province.

The families were sent toward Qayyarah, an area south of Mosul that is home to the Al-Jadaa camp.

That camp hosts almost 7,500 displaced people and families of militants in two separate areas, the Iraqi ministry for the displaced says.

“How can we accept their return while many people are still grieving for at least one member of their family who disappeared after being arrested by ISIS and whose body has never been found?” said Omar.

Syria’s Kurds have repeatedly urged the international community to repatriate foreign nationals held in the country’s northeast, but the calls have largely fallen on deaf ears.

Iraqis make up nearly half of Al-Hol’s inhabitants, according to the United Nations.

“It is the state’s duty to receive repatriated Iraqis and settle them in existing camps before integrating them into their regions of origin,” said Evan Gabro, minister for migration and the displaced.

The families “do not represent a security danger, though I understand popular opposition since they come from Al-Hol,” Jubburi said.

He said most of the arrivals were women and children, and almost all were originally from neighboring Anbar province, also a former militant bastion.

“There are just four or five families that are originally from Nineveh,” Jubburi said.

“Nobody knows if these people have been interrogated or if they were subject to an investigation,” he said.

“Before accepting them, (the authorities) should have ensured that none of them were charged or had committed crimes.”

“The government must be cautious” because the families have spent years in the Al-Hol camp under the influence of militants, he said.

“Is the state able to integrate them and above all, protect society?“

More than three years after Iraq declared ISIS defeated, nearly 1.3 million people remain internally displaced, one-fifth of them in camps, according to the UN.

Iraqi authorities have accelerated the closure of camps in recent months, but the International Organization for Migration says many residents are unable to return home as they are often accused of links to ISIS.

For Omar the soldier, life with the returnees will be “impossible.”

“They have kept their extremist ideas,” he said.