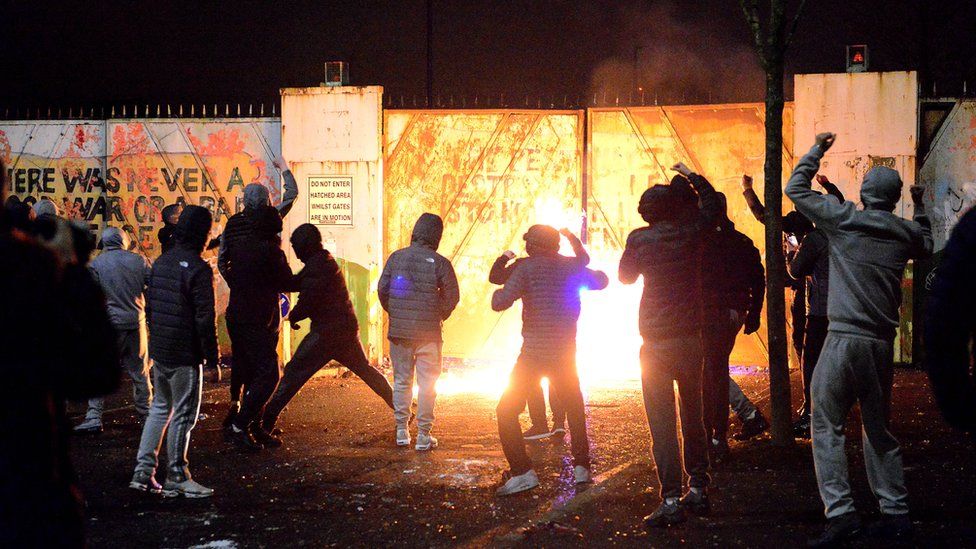 Northern Irish politicians joined together to condemn the violence that has shaken the region over the past six days after seven police officers were injured in clashes relating to post-Brexit trade restrictions and a non-coronavirus-compliant funeral.

A statement released by Northern Ireland’s Deputy First Minister Michelle O’Neill on Thursday said members of the Northern Ireland Executive, a devolved administration separate from the British parliament, are “gravely concerned” about the violence and called for calm.

“Attacks on police officers, public services and communities are deplorable and they must stop,” the statement read. “Destruction, violence and the threat of violence are completely unacceptable and unjustifiable, no matter what concerns may exist in communities.”

It added: “While our political positions are very different on many issues, we are all united in our support for law and order and we collectively state our support for policing and the police officers who have been putting themselves in harm’s way to protect others.”

The move is an unusual step as the region and its politicians are deeply divided over whether or not Northern Ireland should remain part of the UK or reunify with its neighbour, the Republic of Ireland, to form a single country.

The NI Police Federation, the body that represents Northern Irish police officers, told the BBC on Thursday seven officers were injured on Wednesday, the latest night of rioting in Belfast.

On Thursday, Eric Mamer, European Commission spokesperson, said: “We condemn in the strongest possible terms the acts of violence that have occurred in Northern Ireland over the past days. Nobody has anything to gain from this.”

Police Service of Northern Ireland Assistant Chief Constable Jonathan Roberts told the BBC that 55 police officers have been injured during the six nights of violence.

Other areas across Northern Ireland which have also faced violence in recent days include Derry, Newtownabbey, Carrickfergus and Ballymena.

Tensions have been rising in Northern Ireland during the past few months as the country grapples with new post-Brexit border rules between itself and the rest of Britain.

Checks have been implemented as a result of Britain leaving the European Union’s single market and to prevent a hard border between Northern Ireland and the Republic.

The tensions over identity led to a bloody conflict that was resolved in the late 1990s.

Anger was sparked further last week after it was confirmed that members from one of Northern Ireland’s political parties, Sinn Fein, would face no consequences for attending a non-coronavirus-compliant funeral for a former Irish Republican Army (IRA) member in June.

The funeral for Bobby Storey saw 2,000 people attend, including Northern Ireland’s Deputy First Minister Michelle O’Neill, who has since apologized for her actions, and 23 other members of the Sinn Fein party.

The decision was made on Tuesday, March 30 by the Public Prosecution Service that no action would be taken and the violence began three days later on Good Friday.

The actions of Northern Ireland’s police force and how it handled the funeral are being investigated by police watchdog, Her Majesty’s Inspectorate of Constabulary and Fire & Rescue Services (HMICFRS).