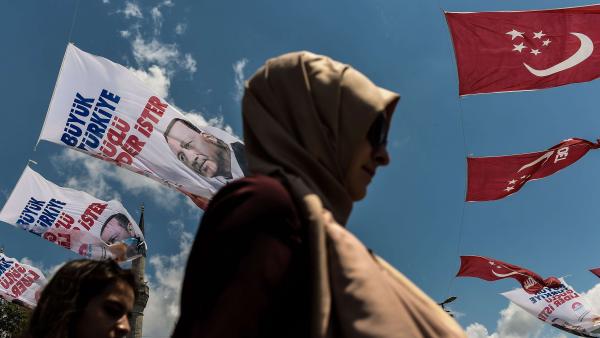 Turkey inflation accelerates to 15.6 percent in challenge for central bank

The inflation rate rose from 15 percent in January, advancing for a fifth-straight month, according to data published by the Turkish Statistical Institute on Wednesday. Prices climbed by 0.91 percent month-on-month, led by food and health costs.

Polls of economists by Reuters and the state-run Anadolu news agency had predicted annual inflation of 15.4 percent and 15.5 percent, respectively.

Turkey’s central bank hiked its benchmark interest rate to 17 percent from 8.25 percent in the final four months of last year to curb price increases and defend the lira. It left rates on hold in January and February.

Central bank governor Naci Ağbal, appointed by President Recep Tayyip Erdoğan in early November after the lira dropped to a record low, has vowed to keep borrowing costs high to bring down inflation and steady the currency. Some economists have called on him to increase interest rates further to anchor inflation expectations and achieve a year-end goal of 9.4 percent.

“With inflation higher, the lira weakening again and not much sign of de-dollarisation, which he (Ağbal) really needs to rebuild FX reserves, he has little choice now but to hike policy rates again,” Tim Ash, senior emerging markets strategist at BlueBay Asset Management in London, said in e-mailed comments to his clients.

The lira, which was trading up 0.4 percent at 7.32 per dollar on Wednesday, rallied to as high as 6.9 per dollar last month from an all-time low of 8.58 per dollar in November.

The central bank is hoping high interest rates will encourage Turks to stop selling liras for dollars and euros so that it can rebuild its foreign exchange reserves, which have become severely depleted after it spent tens of billions of dollars defending the lira last year.

Core inflation, which excludes items such as energy, food and non-alcoholic beverages, accelerated to 16.2 percent from 15.5 percent in January.

Producer price inflation, which had stood at 5.5 percent in May last year, climbed to an annual 27.1 percent last month from 26.2 percent in January, extending the highest level since the summer of 2019. Prices rose by 1.22 percent monthly, the statistics institute said.

The central bank’s monetary policy committee is due to hold its monthly meeting on interest rates on March 18.