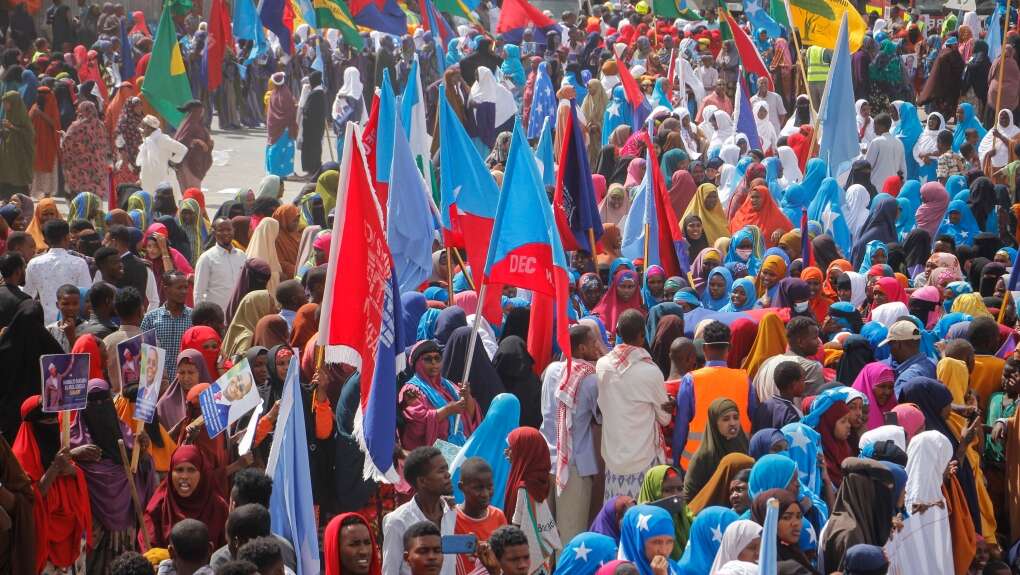 Political activities in Somalia are succeeding to refuse to postpone the presidential elections and continue under the authority of President Mohamed Abdullahi Mohamed Farmaajo, who has illegally outdated his constitutional powers and does not deserve to stay in the presidential palace. Among these activities is the call for demonstrations next Friday to denounce the postponement of the elections. Members of the federal parliament in its two chambers held an emergency meeting in which they announced a national bloc to save the country from political deterioration that would take the country’s political and security progress backward.

According to sources, the meeting was attended by about a hundred representatives who looked for changes in the political situation, on top of which is the heated dispute over the federal elections.

In a press statement to the media, opposition MP Mahad Salad said that the outgoing leadership had failed to hold the elections and settle the dispute with the leaders of the regional states, adding, “The constitutional powers of the Somali leadership have ended, and we will not accept decisions contrary to the law to extend the mandate of the failed government in managing the country.”

Political differences are escalating between the Somali parties, while the international community is calling on all parties to resume talks to get out of the crisis, urging the Somali federal government and regional states to consult with other political partners in electoral affairs. A statement issued by the international community emphasized the need to complete the agreement of September 17 between the regional states and the federal government.

The statement indicated that the international community hopes that all parties will bear fruit in the efforts of the successive Dhusamareb summits and the dialogue with a constructive intention.

“The time has come when all parties should move away from holding on to side decisions and agree to accelerate the electoral process,” the statement added, while the opposition Council of Presidential Candidates warned the federal government against trying to disrupt the popular demonstrations called for next Friday.

Presidential candidate Taher Mahmoud Jaili, who spoke on behalf of the council, indicated that there was news of government efforts to disrupt the demonstrations scheduled to take place at the Tomb of the Unknown Soldier in Mogadishu.

Jaili called on the armed forces to play their role in maintaining the security of the demonstrators, stressing that they would be peaceful protests.

The Council of Presidential Candidates had called for organizing peaceful protests in which its members, including prominent politicians and former presidents, participated against the postponement of the presidential elections. The federal government did not officially respond to the concerns of the presidential candidates, but it had previously suppressed demonstrations against Farmaajo and accused the organizers of inciting riots.

The leader of the council, former President Sharif Sheikh Ahmed, confirmed in a press conference that Farmaajo’s constitutional powers have expired and he does not deserve to stay in the presidential palace illegally.

“Farmaajo failed to abide by the country’s constitution and internal regulations during his presidential term, and he also failed to find a consensual vision for holding the federal elections on time,” Ahmed added.

He stated that the council will hold large peaceful demonstrations in Mogadishu next Friday, demanding a political consensus that would lead the country to hold fair elections.

The council had previously announced that it does not recognize Farmaajo’s presidency following the end of his constitutional term, accusing him of failing to reach an agreement with the heads of regional states and other political parties.