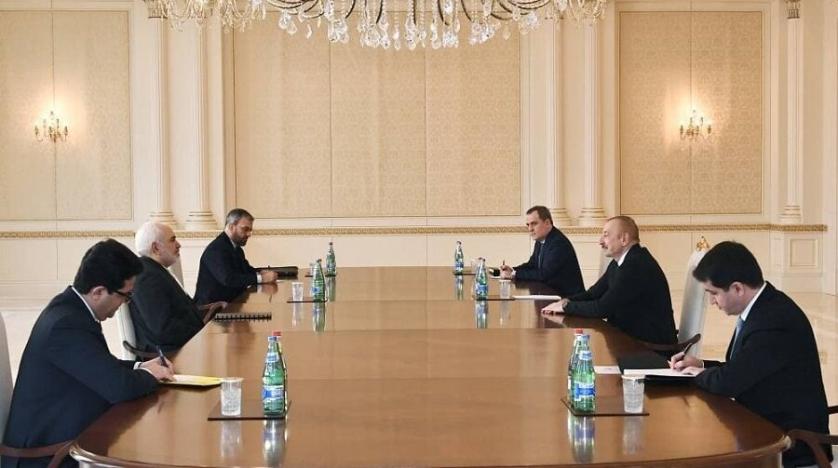 Iranian Foreign Minister Mohammad Javad Zarif held talks Monday with Azerbaijan leaders, including President Ilham Aliyev and Foreign Minister Jeyhun Bayramov, one day following his arrival to the capital of Baku in the first leg of his tour of the Caucasus and Turkey.

The Minister said Iran is ready to actively participate in the reconstruction of the recent liberated areas, IRNA news agency reported.

It said Tehran would present technical and engineering services, in addition to electricity, energy, and the reconstruction of mosques and historical monuments.

For his part, Azeri President Ilham Aliyev welcomed Iranian companies’ presence in the reconstruction of Karabakh.

Iranian media reported that Zarif’s visit aims to “help establish peace and stability in the region.”

As part of his regional tour, the Iranian Minister will travel to Moscow Tuesday to hold talks with his Russian counterpart, Sergei Lavrov.

Meanwhile in Tehran, a website close to conservatives said deputies are planning to prosecute Zarif, in addition to the director of the Department of Environment, Issa Kalantari, and Former Roads and Housing Minister Abbas Akhoundi.

A member of the National Security Committee and foreign policy of the Iranian parliament said that a number of deputies had signed a complaint and raised it to the Iranian judiciary against Zarif.

He said this came after Zarif made statements earlier, claiming that a number of Iranian officials were calling on Washington to engage in negotiations with them rather than the government Hassan Rouhani.