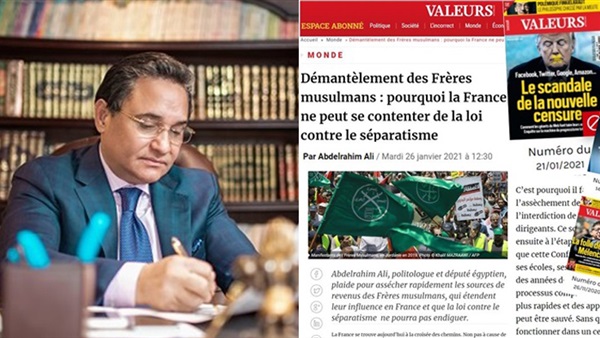 Valeurs actuelles is one of the most famous French website, published today the article of Abd Al-Rahim Ali, Director of the Center for Middle East Studies in Paris (CEMO) and AlBawaba News, on “Dismantling the Brotherhood Organization is an inevitable necessity”.

The site highlighted the article at the front of its home page, praising the important information it contained.

The Full text of Ali’s Article:

France finds itself at a crossroads. Not because of Covid-19 pandemic (which science will overcome, as in other pandemics), but I mean the pandemic of extremism, terrorism and separatism: this scourge that France has suffered for decades and that the government recently decided to face by proposing an anti-separatism law.

Being at a crossroads means that France finds itself on one side, given over to the currents of internal opposition – from right and left – and particularly to the reluctance of human rights defenders. And on the other hand, it also finds itself in the whirlwinds of the international scene which has just changed dramatically since Democrat Joe Biden’s victory in the United States. Victory of which we can mention, among the expected implications, the probable return of the vision of Barack Obama and his policy of support for the Islamist organizations which supported the overthrow of several states in the Middle East and thus contributing to what Condoleezza Rice called “The creative chaos” from which the whole world suffers today.

This means that France, with all its currents and opinions, must clearly identify the challenge to be faced in this decisive battle with vigilance, firmness and speed.

Salafi and jihadist Islamism is the main reason for this chronic pandemic, which all attempts at reform – from Chevènement to Sarkozy to today – have failed. All of these attempts only fueled the crisis by viewing it vaguely as a crisis of Islam and wrongly choosing the intermediaries responsible for reform from among influential people linked to the Muslim Brotherhood.

Its last took advantage of this and did not need to be asked to strengthen their positions and kidnap Islam as well as the Muslims of France. Thus this “crime” has been committed for decades on the banks of the Seine, in cities and suburbs in full view of everyone. Sometimes even, with the complacency of certain politicians.

These close ties between the Muslim Brotherhood, Hamas and ISIS

It is time to change strategy and to clearly define the challenge and the enemy to be faced. Because the Muslim Brotherhood is not a simple traditionalist or conservative organization.

They are classified in the United Arab Emirates and Egypt as a terrorist organization, as well as Hamas, their official branch in Gaza. Hamas who adopted the suicide bombing method following a fatwa from Brotherhood Mufti Yusuf al-Qaradawi, who publicly approved and legalized these operations, going so far as to say they had to be decided and carried out collectively and exclusively under the leadership of the Muslim Brotherhood organization.

However, the links between Hamas and ISIS are no longer to be demonstrated. In July 2017, Issam Saleh, head of the Daesh-affiliated “Army of Islam”, held a press conference in Gaza in which he announced the end of the conflict between ISIS and Hamas, adding that consultations between the two organizations are planned to develop cooperation and logistical assistance provided by Hamas to ISIS, particularly in the Sinai against the Egyptian army.

This was revealed and confirmed by the Israeli Jewish news syndicate, which published an exclusive report and leaked explosive documents about Daesh’s military operations in Sinai. This Israeli political research foundation said it obtained internal documents belonging to Daesh, written by Abu Maram al-Jazairi, one of the leaders of that organization. Eleven pages that indicate that the Daesh branch of “Sinai Province” was receiving substantial software assistance from the armed wing of Hamas in the Gaza Strip.

It was not the first time that Hamas, the Palestinian branch of the Muslim Brotherhood, has cooperated with terrorist organizations. Already in 2009, the court documents concerning the bombing of the Al Hussein mosque in Cairo, of which a victim was a French citizen, revealed that two organizers of this attack: Khaled Mahmoud Mustafa and Ahmed Mohammed Siddiq used Gaza as a place of flight and refuge – under the protection of Hamas.

But the danger of this brotherhood is still relevant, as demonstrated by the recent decision of the US administration in January 2021, to include the Muslim Brotherhood “Hasm” movement in the lists of terrorist organizations.

This movement was founded by Mohamed Kamal, a member of the Bureau de Orientation (the guidance office) of the International Organization of the Muslim Brotherhood, who was killed in a confrontation with the Egyptian security forces in Maadi, in the southern suburbs of Cairo, in October 2016.

In the early 1980s, the International Organization of the Muslim Brotherhood came to France with the objective of preparing its plan for the domination (Altamkine) of the West.

This domination, according to their project, is carried out in three stages which operate in parallel and not successively:

Social domination, which passes through organizations in which French Muslims and immigrants are grouped together in organized associations. They were seven in 1989 and they became 250 in the middle of the year 2005.

Economic domination, via direct and indirect financing: bags of diplomatic money used in the construction of mosques, schools and cultural and educational centers, donations and bank transfers, income from the halal meat trade, from small and large pilgrimages, or from zakat (legal alms).

Cultural domination through the creation of cultural centers, schools, and support for private and home education, which enabled the Brothers to spread their educational, ideological and religious method throughout these suburbs.

A triple mastery that leads to total political domination which begins with the play of influences in local elections, then evolves to become an important card to be taken into account in electoral battles, until it becomes a decisive element in legislative elections or presidential. It is therefore imperative to dismantle, in France, the International Organization of the Muslim Brotherhood in all its social, economic and cultural metamorphoses.

The new law may partially contribute to this dismantling, but it will not be sufficient because the Brothers are known for their ability to adapt to all situations and to overcome all the obstacles they have encountered. They succeeded for about a century in taking advantage of the contradictions of their adversaries to set up their branches and organize their associations. The case of Egypt, where they came to power after the fall of President Mubarak, is the best proof of this.

A dismantling that will take years

This is why priority must be given, as a first step, to the drying up of sources of funding, the monitoring and prohibition of these associations and the prosecution of their leaders. These are the main weapons at our disposal to then take the next decisive step, the dismantling of the ideological system that this Brotherhood has succeeded in implanting in French society through its schools, mosques and associations.

This dismantling will require years of work for its eradication. France is facing a complex process that has lasted for years and years. Faster actions and firmer applications are required to save what can be saved. Otherwise the state and society will, unfortunately, continue to operate in a vicious circle.