Latest Posts
23:47
Home News Get out of our country: Libyan army confronts Erdogan’s militias in south 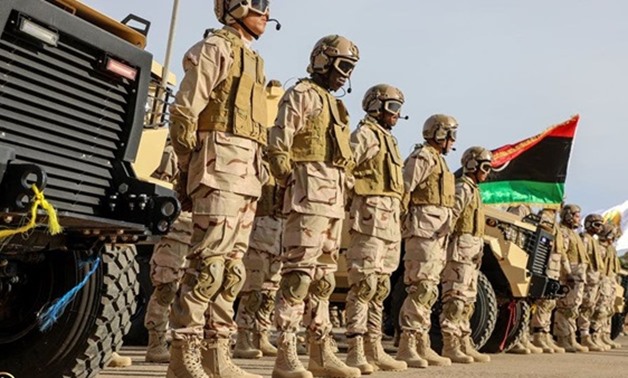 Get out of our country: Libyan army confronts Erdogan’s militias in south

At a time when Ankara is trying to infiltrate southern Libya and take control as much as possible over the whole country by deploying and supporting mercenaries, the Libyan National Army (LNA) is confronting those attempts by force to prevent the Turkish concentration and incursion, blocking the way to those attempts in support of the Brotherhood.

At the beginning of this year, the LNA responded to the attempts to station forces loyal to the regime of Turkish President Recep Tayyip Erdogan in Sabha, the capital of the Fezzan region, and the LNA General Command announced that its units in the Sabha military region had monitored “subversive” movements of elements affiliated with the Government of National Accord (GNA) Presidential Council, operating under orders from Turkey.

The LNA said in a statement that these moves came under orders from the Turkish intelligence, which leads operations to support the Brotherhood and takfirist gangs, warning “everyone who is tempted to compromise security and stability in Sabha and its surroundings.”

It added that it was confirmed that those elements had received funds to destabilize security and stability in southern Libya, especially the city of Sabha, and were recruiting foreign mercenaries.

The commander of the Sabha military region confirmed that units from the region had confronted these rifts and remnants of extremism and crime, and had taken control of its headquarters in one of the city’s sports clubs.

Brigadier General Khaled al-Mahjoub, director of the LNA’s Moral Guidance Department, stated that the Turkish regime has an interest in the continued state of instability in Libya, confirming that there are attempts to move mercenaries in the southern Libyan region. “We will work to fully secure the areas of southern Libya,” he added; however, strong strikes were directed at the armed cells in the city of Sabha.

Meanwhile, Libyan MP Saeed Mughib confirmed that the LNA forces took control of Sabha after the militias retreated, adding that the Turkish-backed Brotherhood organization was behind the militia movement in Sabha and dragged the safe city to the scourge of the armed confrontation, indicating that the GNA militias loyal to the Turkish regime tried to move in an attempt to control the city of Sabha before they were confronted and expelled after the army thwarted their plan to control the city with the aim of turning it into a center for attracting mercenaries from the countries of the Sahara by the Turkish intelligence.

LNA spokesman Major General Ahmed al-Mesmari said that Sabha is under the eyes of the armed forces since they entered the city in 2019, and that what happened at the beginning of this year in the city was due to the presence of groups that declare their affiliation to the GNA forces, which in fact consist of a group of mercenaries and smugglers who help terrorist organizations exploit smuggling outlets.

Mesmari explained that these groups are trying to declare Sabha a city under GNA control, within the framework of a Brotherhood plan aimed at thwarting the ceasefire signed in the Geneva Agreement and preventing the success of the political dialogue currently established to reach a solution.

The Brotherhood’s media channels rely on misinformation, making allegations and making calls to raise the morale of terrorist supporters inside and outside the country, as they first shoot a video clip or take photographs from a certain place, then publish it to the illusion that that area is under their control, Mesmari noted.

In the same context, the head of the office of the Supreme Council of Tribal Sheikhs and Elders, Mohammed al-Mesbahi, explained that the Brotherhood is carrying out conspiracies to break up the role of the tribes to weaken the social role, and this is what subsequently led to the use of foreigners and mercenaries.

Observers unanimously agree that the Sabha events reveal a catastrophic failure of the Turkish plans in the country, as well as the Brotherhood’s loss of any societal legitimacy, unlike the LNA, which enjoys a popular rallying around its project.

Observers believe that the Turkish intelligence is playing on the strings of ethnic and tribal strife to penetrate the resource-rich Libyan south, which has an important strategic location as the gateway to the Sahara Desert and is open to countries historically linked to France, whose relations with Turkey are experiencing severe tensions. Observers note that the Erdogan regime relies on pushing transnational terrorist groups to infiltrate social circles in cities and villages, especially those of ethnic and tribal diversity.

On September 15, 2020, the LNA announced the elimination of a cell belonging to ISIS in the Abd al-Kafi neighborhood in Sabha after confrontations that lasted for more than six hours, and it became clear that most of the cell members were non-Libyans and had moved from northern Syria to western Libya before their infiltration into the south to form a terrorist force from local elements and others from neighboring countries. The LNA said that its forces carried out a qualitative operation in the Tarqin and Sharb neighborhoods in the city of Ubari, targeting one of the hideouts of al-Qaeda in the Islamic Maghreb (AQIM), and through which they managed to arrest terrorists of different nationalities, headed by Hassan Washi, who returned from Mali a few days ago after transporting weapons, ammunition and money to the organization’s wing there, and he was a personal companion to Mukhtar bin Mukhtar, the leader of al-Qaeda’s “Signed in Blood” organization.

This order comes at a time when the Turkish regime has pushed terrorist groups, whether from northern Syria or the countries of the Greater Sahara, such as Mali and Niger, towards southern Libya to form immediate settlements and take up positions in them, with the aim of polarizing, recruiting, and preparing for operations against the LNA. The goal of Erdogan and his allies is to drive the LNA out of the south, especially the Fezzan region, and to obstruct the implementation of the provisions of the Geneva Agreement signed on October 23, 2020.

Sources added that the LNA leadership has confirmed information about the Turkish plan, which is part of a prospective war not only in Libya, but in the region as a whole, where Erdogan is betting on using terrorism to penetrate Libya’s neighboring countries in order to implement his expansionist plan and to put pressure on the major countries with strategic interests in the region, especially France, Russia and China.

Meanwhile, the Africa Intelligence website revealed Turkey’s attempts to establish contact with the tribes that control the Fezzan region in southern Libya through a non-governmental organization, pointing out that, with the stability of the Eastern Western Front now on both sides of the Sirte Al-Jufra axis, Turkey is placing its pawns in the south, which it threatens to become the next stage for clashes in the Libyan conflict. The website noted that a delegation made up of the chiefs of the main tribes in southern Libya was invited to Ankara on November 4, 2020, by the Turkish Humanitarian Relief Foundation, which was attended by prominent representatives, including the supreme leader of the Tuareg tribes, Moulay Qadidi; the head of the Unified Council of the Tebu Tribes, Mohamed Wardougoul the former Undersecretary of the Ministry of Families of Victims and Missing Persons, Mohamed Sidi Ibrahim, who is the second man in the Tabu Council; President of the Amazigh Supreme Council, Muhammad bin Talib; and Hassan Musa Kelly, the military commander of the Tebu, who is allied with the GNA and a member of the Petroleum Facilities Guard.

According to the Africa Intelligence report, Turkey will continue to claim that it is performing the historic mission that falls upon it to establish security and peace in Libya and preserve its territorial integrity. However, army sources confirmed that everyone knows that there are tribal parties linked with the Brotherhood and the GNA. Thus, with the Turkish-Qatari axis, it does not represent a real social weight in the region, and it moves on the basis of personal interests, not national interests.