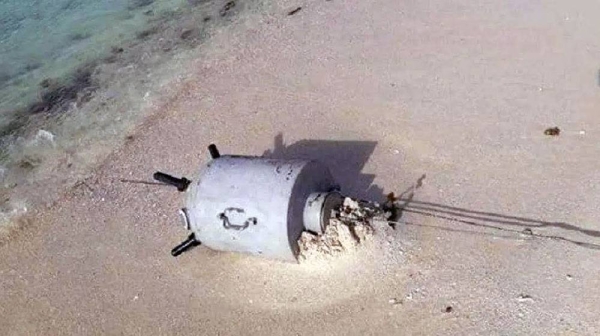 The Arab Coalition has removed 157 naval mines placed in the south of the Red Sea by Iran-backed Houthis on Saturday.

The Coalition said that 157 naval mines that have been randomly deployed by the Iran-backed Houthis, the mines have been discovered and removed.

The Coalition added that the Houthi militia continues to threaten maritime navigation and global trade in the Bab Al-Mandab strait and the southern Red Sea.

The spokesman said the boats were launched from Hodeidah Governorate, which the Houthi militias use “as a base to launch ballistic missiles, drones, booby-trapped remote-operated boats, as well as the random deployment of sea mines in flagrant violation of international humanitarian law and a violation of the provisions of the Stockholm cease-fire agreement in Hodeidah.

A major environmental, humanitarian and economic disaster lies in wait in the Red Sea – and there’s only a tiny window of opportunity to prevent it.

Described as a “floating bomb”, the 1,188-foot FSO SAFER has approximately 1.14 million barrels of crude oil that risk spilling. To provide some perspective, that is four times as much oil as the Exxon Valdez tanker spilled in Alaska’s Prince William Sound region back in 1989. That disaster from 31 years ago, which resulted in over 1,300 miles of shoreline being damaged, continues causing ecological harm to this day.

According to the United Nations Environment Program’s executive director, the 45-year-old rusting vessel sinking or exploding would lead to decades of ecological destruction. This scenario would threaten 1,200 species of fish, 300 species of coral reefs, as well as the biodiversity of 115 islands. Because the oil is light weight, much of it would spread far quicker across the water than heavy oil would. The cost of the clean-up would be in the billions.

Such an environmental disaster would result in the Red Sea’s ports and shipping lanes closing. For the millions of Yemenis who depend on international aid, which can only be delivered via Yemeni ports, such a catastrophe could produce unimaginably disastrous consequences.

The realities of Yemen’s war between Houthis on one side and forces loyal to the Saudi-backed government of President Abdrabbuh Mansur Hadi and the Riyadh-led Arab coalition on the other make this process dangerous. The continuation of this war makes it increasingly risky for a salvage team to do the job which is necessary to prevent such an oil spill. After all, this vessel is situated in an extremely militarised body of water.

Various reports allege that the Houthis are exploiting the “floating bomb” for political purposes, using the vessel as a “bargaining chip” to gain control of the oil on board (worth roughly USD 40 million—down from USD 80 million before oil prices collapsed earlier this year) to finance salaries of employees within the de facto Houthi proto-state. The Hadi government’s position is that the oil proceeds should be invested in projects across Yemen to help the country better cope with humanitarian emergencies.