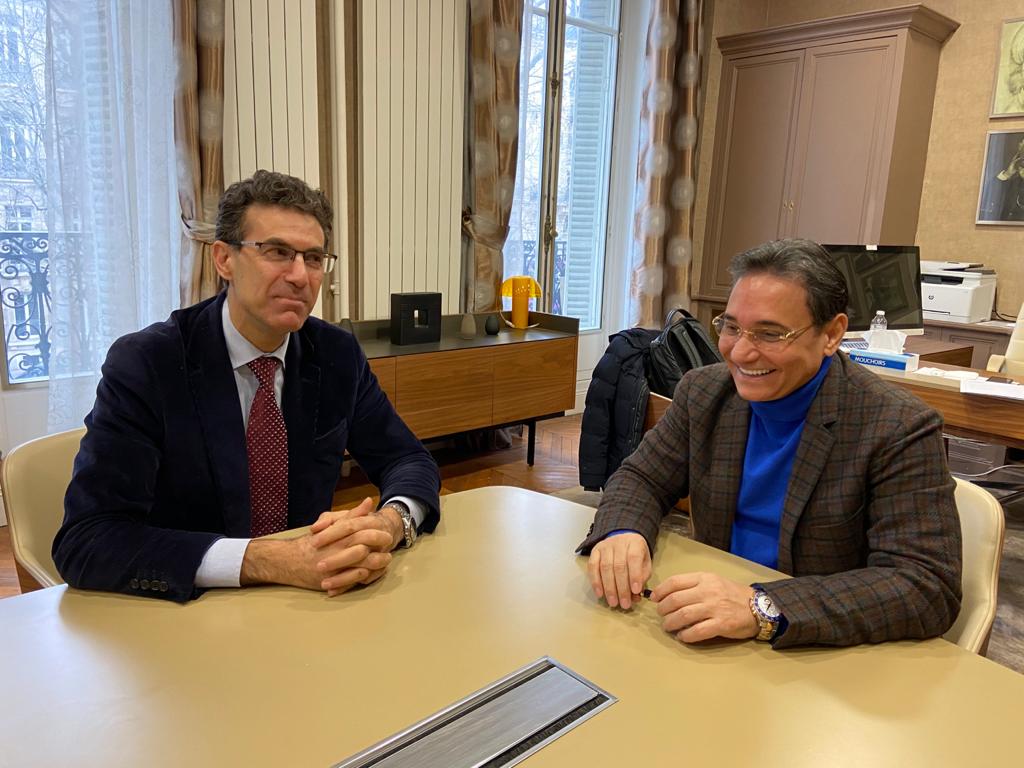 Ali dwells on Libya, Turkish interference in interview with Atlantico

CEMO Chairman says Egypt not to allow Libya to be controlled by Brotherhood, Turkey

Chairman of the Board of the Center for Middle East Studies in Paris (CEMO), Abdel Rahim Ali, gave an interview to the news site, Atlantico, about the situation in Libya and its effects on the Middle East region.

Ali also focused in the interview, conducted by the site’s managing editor-in-chief, Alexandre del Valle, on the positions of Egypt, the United Arab Emirates and France to Turkish interference in the region and the support Turkish President Recep Tayyip Erdogan gives to Islamists and mercenaries who had fled Syria, with support from Qatar.

Here is the text of the interview that was published in Atlantico:

Following years of civil fighting induced by the French, British and American interference that toppled the regime of longstanding Libyan ruler Muammar Gaddafi in 2011, Libya is sinking into chaos and partition into two rival sections.

One of the resultant sections acts against Islamists and is led by Gen. Khalifa Haftar whose forces receive support from the authorities in Benghazi, and the Tobruk-based parliament.

The other section is ruled by the Government of National Accord which is backed by the Muslim Brotherhood. This government is based in Libyan capital Tripoli and is backed by Qatar and Turkey.

On October 23, the United Nations started enforcing a ceasefire throughout Libya. Rival parties in the war-torn country also agreed to start peace talks under Egyptian and United Nations sponsorship.

Elections will likely be held at the end of next year. Rival Libyan parties also agreed that foreign militias, including those backed by Russia and Turkey, would leave Libya along with jihadists and African mercenaries, within months.

Del Valle: Sir, Egypt is a neighboring country of Libya. Some Egyptian nationals had been killed by jihadists in the neighboring country. Egyptian President Abdel Fattah al-Sisi warned several times that he would not allow the Muslim Brotherhood or Turkey to control Libya. What is the official Egyptian position to Turkish presence in Libya and support to the Muslim Brotherhood in Tripoli?

Ali: Egypt aims primarily to reach a political settlement to the conflict in Libya. This is why it contacts all parties to the conflict. It also works to neutralize parties working to sabotage any potential agreements.

This was why Sisi drew a red line around Sirte and Al-Jufra. The red line aims to keep Turkey and the troops it backs away from the two cities because this will worsen the situation in Libya.

Meanwhile, Egyptian diplomats contact all parties to the conflict in Libya to encourage them to sit on the negotiating table and start real dialogue. The aim here is to open the door for a new political body that is approved by all parties. This body will manage the transitional period and prepare for general and presidential elections.

Del Valle: Turkey keeps sending arms and jihadists to Libya with the aim of protecting the pro-Muslim Brotherhood government in Tripoli. The forces of this government succeeded in stopping the advance of the troops of Gen. Haftar towards Tripoli. Is there anything new in this regard?

Ali: Turkey uses the Americans’ preoccupation with the presidential elections and the Russians preoccupation with the war between Azerbaijan and Armenia and Europe’s preoccupation with  the new wave of the coronavairus and tries to complicate the situation in Libya. It does this by sending mercenaries and arms to the country. This paves the road for a real war, to which Egypt will most likely be a main party. The fact is that Egypt will not allow unrest to reign in everywhere in Libya. Egypt and other countries help Haftar to stand against all the challenges he is facing. However, they do not send arms or fighters to him. They only do this by preventing the flow of arms to Libya. They also try to unify regional states against Turkish interference in Libya. Nonetheless, the possibility of war between Egypt and Turkey is there while the whole world is looking somewhere else.

Del Valle: This is very dangerous. Do you think Egypt and the United Arab Emirates which fight the Muslim Brotherhood and the new Ottoman imperialism will offer support to the Armenians in their war against Azerbaijan?

Ali: The Armenian president has already contacted Egypt and the United Arab Emirates. Some Arab countries, I think, are moving to back Armenia. These countries just believe that Turkish support to Azerbaijan is not separable from Erdogan’s ambitions in the region.

Del Valle: How do you respond to media outlets that claim that Egypt and the United Arab Emirates had already stopped backing Haftar? The same media claims that the two countries put pressure on the Libyan general to approve the presence of the Muslim Brotherhood and Turkey in western Libya.

Ali: I think all this is baseless. What is being said in this regard is so detached from reality. The coming days will prove my point of view true.

Del Valle: There are fears in some Arab states that a suspension of Egyptian and Emirati support to Haftar would give the Muslim Brotherhood and jihadists to gain new ground in Libya.

Ali: Neither did Egypt or the United Arab Emirates stop supporting Haftar. They might have a different vision for Haftar’s project when it comes to giving him the chance to become the new president of Libya. This will hamper any peace talks in the future. Turkey and its militias will also use this to advance their project in the country. Egypt and the United Arab Emirates want to ensure that Haftar will be part of any political equation in Libya as a commander of the Libyan army. I think they prefer that a civilian would mount the Libyan saddle.