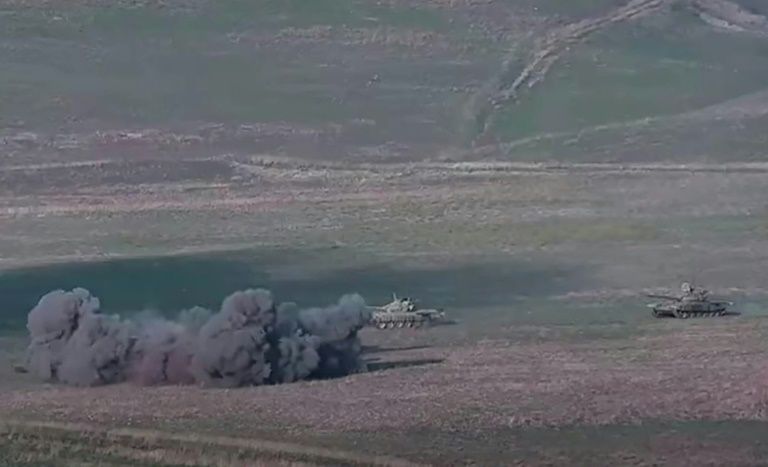 Armenia has declared martial law and total military mobilisation following clashes in Nagorno-Karabakh, an Armernian separatist region in Azerbaijan that has long been a point of conflict between the two countries.

“The government has decided to declare martial law and a total mobilisation,” Armenian Prime Minister Nikol Pashinyan wrote in a Facebook post on Sunday.

Tensions rose between Armenia and Azerbaijan on Sunday morning over clashes in which Yerevan said Azeri forces shelled the region of Nagorno-Karabakh and Baku accused Armenian forces of shelling Azeri military and civilian positions.

Casualties were unclear but Armenia’s defence ministry said an unspecified number of civilians had been killed by Azerbaijan’s forces.

The two countries have long been at odds over Azerbaijan’s breakaway, mainly ethnic Armenian region of Nagorno-Karabakh which declared independence during a conflict that broke out as the Soviet Union collapsed in 1991.

Though a ceasefire was agreed in 1994, Azerbaijan and Armenia frequently accuse each other of attacks around Nagorno-Karabakh and along the separate Azeri-Armenian frontier.

Armenia’s defence ministry said its troops had destroyed three tanks and shot down two helicopters and three unmanned aerial vehicles in response to an attack on civilian targets including the regional capital of Stepanakert.

“Our response will be proportionate, and the military-political leadership of Azerbaijan bears full responsibility for the situation,” the ministry said in a statement.

The Armenian foreign ministry also said there would be an “appropriate military and political response”.

Azerbaijan denied the Armenian defence ministry statement, saying it had “complete advantage over the enemy on the front.” Hikmet Hajiyev, a senior adviser to Aliyev, accused Armenian forces of launching “deliberate and targeted” attacks along the front line.

Azerbaijan’s defence ministry said Armenia had attacked civilian settlements and military positions along the “contact line”,” a heavily-mined no-man’s-land that separates the Armenian-backed forces from Azeri troops in the region.

It said some civilians had been killed “as a result of the intensive shelling” by Armenia, and that Azerbaijan had taken retaliatory measures.

It said Azerbaijan’s army launched a “counter-offensive operation along the entire front to suppress the combat activity of the armed forces of Armenia and ensure the safety of the civilian population”.