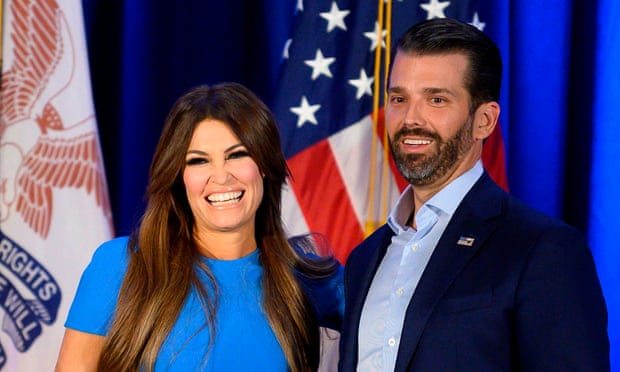 The girlfriend of Donald Trump Jnr, the US president’s eldest son, has tested positive for the coronavirus, US media have reported.

Kimberly Guilfoyle, who is a former Fox News television personality and a senior fundraiser for Donald Trump’s re-election campaign, is just the latest person in Trump’s inner circle to contract the potentially deadly virus. The news also comes as the US is experiencing a huge spike in coronavirus cases and amid withering criticism of Trump’s response to the crisis.

Guilfoyle had travelled to be with Trump as he gave a high-profile speech in South Dakota but did not attend the event after getting the positive test result, the New York Times reported. She had not been in recent proximity to the president and Donald Trump Jnr tested negative, the paper said.

Trump has been widely condemned for downplaying the seriousness of the coronavirus crisis wracking the US which has now killed more than 120,000 Americans. Trump has refused to wear face masks, promoted unfounded conspiracy theories on the virus’ origins and potential cures and for pushed for the rapid reopening of the American economy.

Trump’s event in South Dakota – like a recent campaign rally in Tulsa, Oklahoma – has also alarmed public health experts for taking place during the pandemic and for playing little mind to social distancing protocols or other steps to avoid spreading the virus.