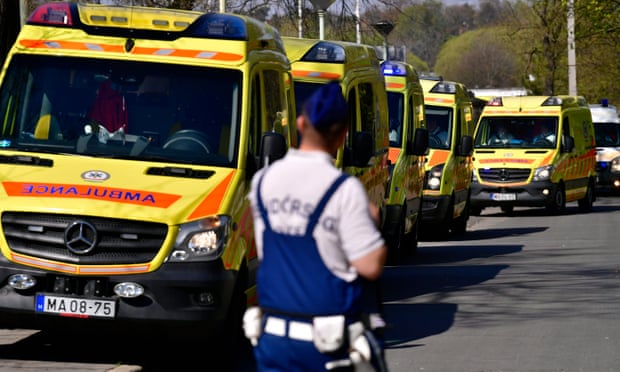 Care homes across globe in spotlight over Covid-19 death rates

Care homes for older people across much of Europe and North America are struggling to cope with the global coronavirus pandemic, prompting allegations of inhumane treatment and calls for high-level inquiries.

Appalling stories have emerged from residential homes, which have emerged as a key location for infections. People aged 70 and older are at higher risk of getting very sick or dying from the coronavirus. And people 85 and over are even more vulnerable, global figures show.

In Spain, the army has reported finding dead and abandoned people in their beds after it was drafted in to help disinfect care centres. Care homes in the Madrid region alone have reported the deaths of 4,260 residents who were diagnosed with coronavirus or had associated symptoms since 8 March, the regional government said on Wednesday.

In France almost a third of all coronavirus deaths have been of residents in care homes. According to the latest figures released on Tuesday a total of 3,237 people have died in care homes. In Paris alone there were 172 deaths and over 2,300 homes have reported at least one case of Covid-19.

At one of the worst affected care homes in Mougins, near Cannes in the Alpes-Martimes, 31 people – one third of its total number of residents – have died since 20 March. A spokesperson for the home also revealed that 14 of the 50 staff had tested positive for Covid-19. The family of one resident who died is taking legal action against persons unknown for “endangering a person’s life”.

A worker pushes a man on a wheelchair outside an elderly people’s nursing home in Burgos in northern Spain on Thursday.

On Wednesday, Le Monde published an op-ed from Monique Pelletier, a former minister for women, who criticised the “incomprehensible and inhumane” way residents in some retirement homes were being treated.

“It’s taken hundreds of deaths of ‘the old’ in these establishments … from Covid-19 for people to finally show some interest in them,” she wrote. “First of all we ‘forgot’ to publish the number of them who died daily, reserving that only for those who died in hospital for more than a week, then we learn more than 3,000 have died.”

She said many residents had been shut away in their rooms for six weeks without seeing anyone else except hard-pressed staff after visits were banned.

In Italy an anomalously high number of recent deaths in the country’s care homes has prompted calls for a parliamentary inquiry. According to figures from the Higher Health Institute (ISS), 3,859 people have died in care homes across the country operated by the RSA organisation since 1 February, of whom 133 had tested positive for coronavirus and 1,310 suffered symptoms connected with it.

However, Giovanni Rezza, the ISS’s chief epidemiologist, told reporters on Tuesday the figures are underestimates, given that few tests have been carried out on residents.

Staff at a retirement home in Bergamo, Italy, wave to radiological, chemical and biological defence experts from the Russian Defence Ministry who had come to carrying out a full disinfection.

The majority of the care home deaths have been in Lombardy, the region worst affected by coronavirus and where prosecutors are investigating a care home in Milan where 27 people died of suspected coronavirus in the first week of April.

Relatives of residents say that resolving the situation must take priority over prosecutions. As hospitals in Lombardy became quickly overwhelmed, little guidance was given on how to handle the virus in care homes, it has emerged.

“I’m not interested in pointing the finger – what I want to know is, what are we doing to solve this?” said Giorgia Memo, whose mother, Fernanda, is in the Milan care home.

Memo said that of 25 residents on the same floor as his mother, 18 or so had a fever. She said her mother is also now very weak.

“I haven’t seen her in over a month. Ten days ago they said tests would be done on everyone. But where are these tests? Do we have to wait until everyone dies before something is done?”

Memo added: “The medical staff and assistants in there are outstanding – they are working 12-hour days and when I call at the end of the day, they still have the energy to tell me how my mother is. But as they are getting sick too, there aren’t many people working there.”

In Germany there have been reports of deaths in homes totalling hundreds across the country. In the worst case so far, 29 out of 160 residents at a care home in the northern city of Wolfsburg died after 74 residents became infected. Prosecutors are now investigating the home on charges of death through negligence.

Gerda Hasselfeldt, president of the German Red Cross, described the situation in care homes as “extremely fraught”. “If we are not careful, over the next few weeks hospitals will have to face the prospect of admitting many patients from care homes,” she warned.

Ireland reported coronavirus clusters in 86 nursing homes on Wednesday, more than double the number from last Saturday, fuelling accusations that authorities moved too slowly to protect some of those most vulnerable to the disease.

Officials became alarmed last weekend when there were 40 clusters and announced measures to help nursing homes, including the creation of national and regional infection-control teams, temperature screening of staff twice a day and financial support of up to €72m.

Most of the outbreaks are in private facilities, with a minority in those run by the health service. The nursing home sector welcomed the support and said it could cope if staff were given training and equipment.

In Canada, health authorities have been grappling with coronavirus cases in long-term care homes across the country. At one retirement home in Bobcaygeon, Ontario, 29 of its 65 residents have died after contracting the virus.

In the United States, a home in Kings County in Washington State has become a focus of concern, after 40 people died and staff transmitted the virus to other care homes in the area. In Texas, where there have been serious outbreaks, authorities have refused to release any statistics on infections or deaths in care homes. Authorities in California have urged people to remove their relatives from care homes wherever possible.

Many countries are also reporting a shortage of basic protective equipment and testing kits in care homes, leaving staff vulnerable.

In Spain, the CSIF public workers’ union said two care home workers had died from the virus in the Madrid region while another 400 had become infected.

Elvira González Santos, president of the Aetesys nursing association, said the conditions in many Spanish care homes were finally coming to light, to the relief of the association’s members.

“Now that it’s been in the media and the government is acting and testing people, people are feeling a little better,” she said. “But there’s still a lack of personal protective equipment, which is in high demand and very expensive.”

The Red Cross said across Germany care homes were suffering from a lack of protective clothing and disinfectant, which was contributing to the virus’s spread.