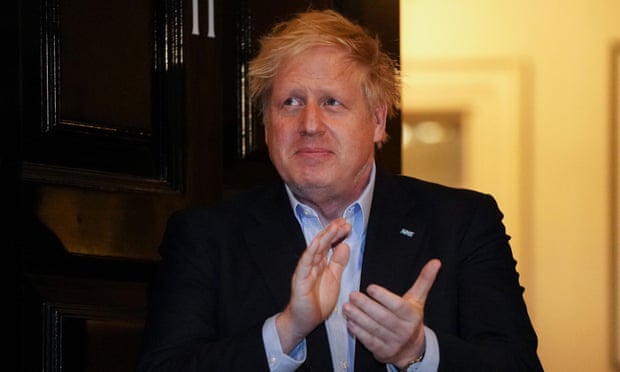 Boris Johnson moved from intensive care but stays in hospital

Boris Johnson is back on a hospital ward after spending three nights in intensive care, and is in “extremely good spirits”, Downing Street has announced.

In a statement released on Thursday evening, a No 10 spokesman said: “The prime minister has been moved this evening from intensive care back to the ward, where he will receive close monitoring during the early phase of his recovery.”

Dominic Raab, who is deputising for Johnson, had earlier said the prime minister was making “positive steps forward”.

Speaking at the daily Downing Street press conference, Raab admitted he had not spoken to Johnson since the prime minister was admitted to hospital, but insisted the government continued to function smoothly.

Johnson had previously been described as sitting up, but he had not been playing any role in government decision-making while he received treatment at St Thomas’ hospital in London.

Asked if he had been in contact with the prime minister, Raab said: “Not yet. I think it’s important, particularly while he’s in intensive care, to let him focus on the recovery. We in the government have this covered.

“I chaired the Cobra meeting that I’ve just come from. We’re pursuing all the different strands of our strategy to defeat the coronavirus, and I’m confident we’ll get there.”

Raab has also been chairing the daily Covid-19 committee meetings of the cabinet, which are attended by the health secretary, Matt Hancock, the chancellor, Rishi Sunak, and the cabinet office minister, Michael Gove.

Hancock welcomed the news that the prime minister had left intensive care, saying: “I know our amazing NHS staff have given him their characteristic world-class care.”

On Thursday evening, just after the 8pm “Clap for Carers” where people across the country came out to applaud healthcare and key workers, the prime minister’s fiancee, Carrie Symonds, showed her appreciation for the NHS by tweeting a picture of a rainbow and a series of clapping emojis.

The rainbow has become a symbol during the coronavirus pandemic for people wanting to show solidarity with NHS workers.

Johnson was taken into hospital on Sunday after his coronavirus symptoms, including a cough and a high temperature, persisted.

He was moved into intensive care on Monday evening. The government has said he has not been put on a ventilator but has continued to receive “standard oxygen treatment”.

Johnson tested positive for the virus on 27 March, but continued to work while isolating himself in Downing Street, including chairing meetings by videolink.

The home secretary, Priti Patel, told Talk Radio on Thursday that at the virtual cabinet meeting a week ago, pictures of which were released to the media, it was evident to colleagues he was continuing to experience symptoms.

“It was clear he was unwell, and needed to get rest and recuperation,” she said.

Johnson tested positive on the same day as Hancock and the chief medical officer for England, Prof Chris Whitty, also announced he was experiencing symptoms.

Raab said earlier in the week: “I’m confident [Johnson] will pull through because if there is one thing that I know about this prime minister, he is a fighter and he will be back leading us through this crisis in short order.”

Symonds, who is expecting a child in the summer, also went into self-isolation after experiencing symptoms of the virus – though she has said she has now recovered.

The Queen sent a message to Symonds and Johnson’s family earlier in the week, wishing the prime minister a speedy recovery.