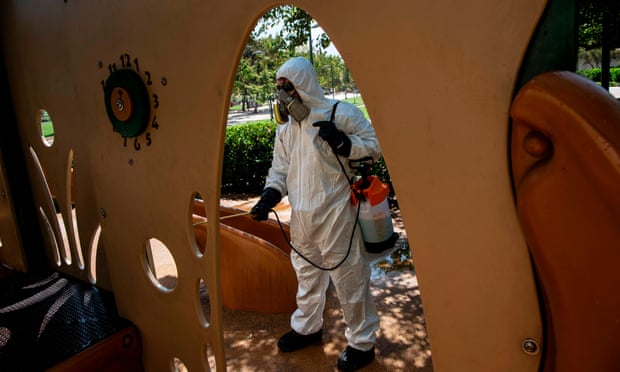 WHO sees ‘encouraging signs’ in Europe

The World Health Organisation says it encouraged by the lower rate of new infection in Italy. Its regional director, Hans Kluge, said: “While the situation remains very serious, we are starting to see some encouraging signs. Italy, which has the highest number of cases in the region, has just seen a slightly lower rate of increase.”

Spain has announced another 655 coronavirus fatalities taking the country’s total to more 4,000. As the increase is below the daily rise recorded on Wednesday it offers support to government claims that the rise is deaths in Spain is stabilising.

India has announced a 1.7tn-rupee (£18.9bn) economic stimulus plan to millions people, hit by a nationwide lockdown. “We do not want anyone to remain hungry” said the finance minister. He said the government aims to distribute 5 kilograms of staple foodgrains wheat or rice for each person free of cost, with a kilogram of pulses for every low-income family, helping to feed about 800 million poor people over the next three months.

The health ministry confirmed another 157 deaths from the virus in the last 24 hours, taking Iran’s total to 2,234 fatalities. A record 2,389 new cases had been recorded over the same period. Five days ago the numbers being infected daily was below 900.