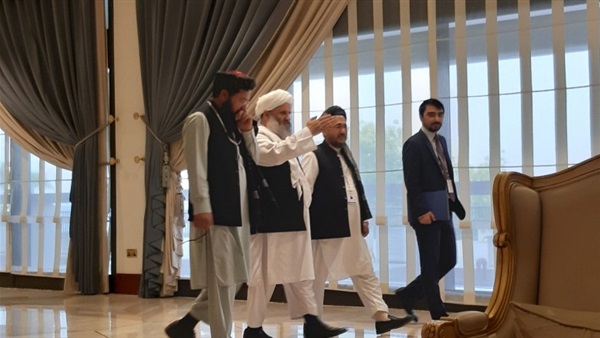 War against Daesh Khorasan, is the U.S. tricking Taliban?

After signing of an agreement between the United States of America and the Taliban movement to end the presence of U.S. troops in Afghanistan, Daesh started highlighting its existence in the region once again.

Daesh has claimed responsibility for a rocket attack targeting the inauguration of Ashraf Ghani as the Afghan president in Kabul on Monday, the group said in a statement on an affiliated Telegram channel.

Ghani’s ceremony was disrupted by the sound of rockets hitting the edge of the compound of the presidential palace compound in the capital Kabul, but there was no word of any casualties and he continued his speech.

U.S. Marine Corps General Kenneth F. McKenzie commander of United States Central Command (CENTCOM) has said of the Taliban’s virtual defeat of Daesh in Afghanistan’s Nangarhar province in recent months. “It was a bloody mess, but they did it,” he added.

McKenzie disclosed the US military support for the Taliban operation in congressional testimony, but provided few details on the role played by US forces.

He was called to testify about the situation in Afghanistan following a peace deal that the United States signed with the Taliban February 29 in Doha.

Under the agreement, the United States committed to the withdrawal of all foreign fores within 14 months in return for a Taliban pledge to tackle jihadists such as Daesh and Al-Qaeda, and hold peace talks with the Afghan government.

“Over the last several months in eastern Afghanistan we’ve watched the Taliban compress and crush the Daesh presence on the ground in southern Nangarhar province, and they’ve been very effective doing that,” McKenzie said, using an alternate acronym for Daesh.

This cooperation comes at a time when the United States had previously accused other countries, including Russia, Iran and Pakistan, of supporting the Taliban movement and obstructing the peace process in Afghanistan, in addition to Washington’s earlier denial of the possibility of dealing with the movement to fight the influence of Daesh in Afghanistan.

U.S. troops have begun leaving Afghanistan for the initial troop withdrawal required in the U.S.-Taliban peace agreement, amid political chaos in Kabul that threatens the deal.

Army Col. Sonny Leggett, spokesman for U.S. forces in Afghanistan, said in a statement that the U.S. is moving ahead with plans to cut the number of forces in the country from about 13,000 to 8,600 over the next four and a half months.

On the other hand, accusations started launching against the United States by Afghan officials because of the Daesh presence there, as Hamid Karzai, the former Afghan president, accused the United States of supporting the terrorist organization in his country.

Daesh marched in Afghanistan after declaring its presence there, in what is called “Khorasan Province”, on the approach it followed in Syria and Iraq, taking advantage of the turbulent conditions in the first place, then relying on the different sects, where it poured most of its focus on this chord to revive sectarian strife.

The mountainous nature in the border region between Afghanistan and Pakistan provided a fertile environment for the organization, and the recruitment of combat-trained elements, taking advantage of changing alliances and splits among its rivals. The extremist organization benefited about four years after its emergence in the Afghan arena thanks to rugged terrainm the weakness of government forces, and dispersion of the hardline Taliban movement itself.

A book written by Italian expert Antonio Giustozzi, namely ‘The Islamic State in Khorasan: Afghanistan, Pakistan and the New Central Asian Jihad’, explores the nature of Daesh in Khorasan, its aim and strategies, and its evolution in an environment already populated by many jihadist organizations.

Based on first-hand research and numerous interviews with members of Daesh in Khorasan, as well as with other participants and observers, the book addresses highly contentious issues such as funding, Daesh’s relationship with the region’s authorities, and its interactions with other insurgent groups.

By early 2015, Afghan government officials were showcasing the ‘IS threat’ in Afghanistan as yet another key reason for the US not to leave Afghanistan at the end of 2016. Over time, the evidence suggested that some sort of Daesh group had established itself in Afghanistan became more and more compelling.

In the second half of 2014 and during the first months of 2015, Daesh groups were popping up all over Afghanistan as a result of commanders of the Taliban, Hizb-i Islami and other armed groups switching sides.

Then, from spring 2015, a process of consolidation seems to have taken place, with Daesh trying to establish strong bases in carefully selected locations.

Different sources (Daesh cadres themselves, Afghan security sources, Pakistani security sources and Iranian Pasdaran sources) seemed to agree earlier that there were around 7,000–8,500 Daesh members based on Afghan soil and 2,000–3,000 based in Pakistan. These figures are inclusive of all active Daesh members, both fighters and support elements.

On Washington’s announcement of providing support to the Taliban to end the presence of Daesh, Sabra Al Qasimi, an expert on Islamist groups, stressed that history is repeating itself, just as the United States supported Al Qaeda and turned against it, because what is happening now is a return to what happened previously, indicating that it is trying to exhaust the energy of the two movements, but unless the calculations are done well, it is likely that there are many elements of the Taliban who will join Daesh and the province of Khorasan will prosper.

It was also pointed out that despite that the United States seeks to withdraw for the high costs of war and existing in Afghanistan, the incoming operations are highly expected to become more bloody and destructive.

Hisham Al-Najjar, a researcher specializing in Islamist movements affairs, has also affirmed that there is an arrangement for America’s priorities in the world, especially in the vital files that directly affect its national security, and that is why it is retreating and compromising with entities and organizations, in exchange for confronting more dangerous and rebellious entities.

He further added that the United States is currently pursuing a policy that meets the agenda of President Donald Trump in ruling, which is to get out of the hotbeds of conflict, stop wars, and withdraw troops, and this requires negotiations and concessions to some extremist entities and organizations that were hostile yesterday, such as the Taliban, in exchange for certain conditions that achieve current US interests.