Latest Posts
17:16
Home Reports Tomorrow in Spain…flags to lower to half-staff and declaring a state of official mourning 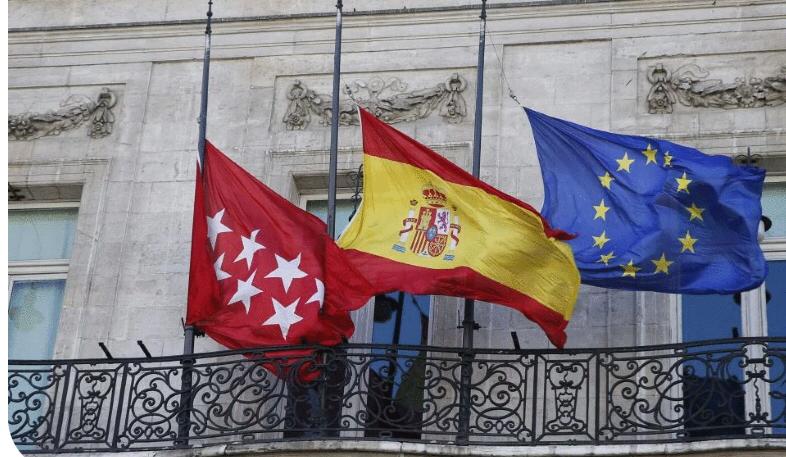 Madrid authority announced that the Government would announce a decree declaring a state of official mourning from Monday in honor of the 3,000 victims of the Covid-19 disease in the region.

The Madrid flag will fly at half-mast at public buildings indefinitely, and the regional government will invite residents to observe a minute of silence at 12pm every day in memory of those who have died.

Decree No. 12/2020 signed by the President of the State of Madrid, Isabelle Diaz Ayuso, included that this measure is evidence of the extent of pain and grief experienced by the capital Madrid in the face of the suffering of all Madrid residents affected by the epidemic, as it was distributed to all officials to be implemented from tomorrow .

325 deaths were added in the last 24 hours only in Madrid, while the injuries rose to 22,677, there are a thousand and 429 admitted to the intensive care unit (25 cases more than yesterday Saturday) and 7 thousand and 491 people have already been treated

The deaths recorded by Madrid accounted for 47.2% with 6 thousand and 528 deaths, while the infection represented 28.72% of the total recorded by Spain as a whole 78 thousand and 797 positive cases, while the Director of the Emergency Center of the Ministry of Health, Fernando Simon, announced today, Sunday, a low rate New infections, calling for caution and caution because there is still overcrowding in the intensive care units.