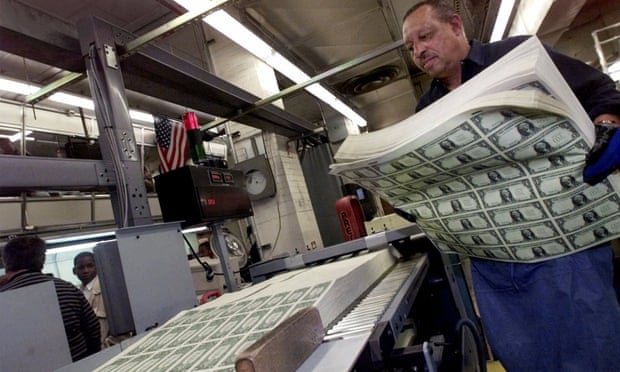 Global stock markets staged a strong rally on Tuesday as investors were buoyed by the Federal Reserve’s efforts to boost the US economy and the prospect of Congress backing a fiscal stimulus package.

The rally on US and European markets followed gains in Asia overnight in the wake of the US central bank’s move on Monday to launch an unlimited money-printing programme.

The world’s seven key western economies also sought to calm mounting fears of a global depression on Tuesday by pledging to do whatever it takes to get through the coronavirus pandemic.

Despite the market rallies, Tuesday saw early warning signs for developed economies as data showed the steepest plunge in business activity on record in Britain, Japan and the eurozone.

As more countries effectively shut down large parts of their economies to contain the spread of the virus, the G7 said it would take further steps to coordinate the fightback against the economic meltdown.

Issuing a joint statement following criticism of some world leaders over the lack of a united response to the unfolding crisis, the group of wealthy nations said: “We will do whatever is necessary to restore confidence and economic growth and to protect jobs, businesses, and the resilience of the financial system.”

Finance ministries across the group – comprised of Canada, France, Germany, Italy, Japan, the UK and the US – will coordinate weekly, and promised to take further measures when needed to cushion the economic blow, according to the statement, while policies to support jobs and growth will be used for as long as necessary.

“We also pledge to promote global trade and investment to underpin prosperity. Our nations are working together to fight the Covid-19 outbreak and mitigate its impact, treat those affected and prevent further transmission,” the G7 said.

The G7 intervention came as closely watched surveys of business activity revealed the early economic damage from the rapidly escalating crisis. The purchasing managers indices (PMI) – which provide snapshots of business activity – for the UK, Japan and the eurozone plunged to the lowest levels since PMI records for those economies began. The UK PMIs date back to 1996, with those for eurozone countries launching in 1998 and Japan’s starting in 2007.

The flash PMI for the UK’s dominant service sector – which includes restaurants, hotels and banks, and accounts for about 80% of the UK economy – crashed to 35.7 on an index where anything below 50 represents contraction.

The collapse on the index, which is closely monitored by the Treasury and the Bank of England, outstripped the slump recorded during the depths of the 2008-09 financial crisis, as emergency public health measures disrupt supply chains and demand for goods and services evaporates.

Surveys in the US showed private sector activity contracting at the fastest rate since the depths of the financial crisis in 2009, while activity across the eurozone crashed by the greatest extent ever recorded by the data firm IHS Markit, which compiles the surveys. In a potential prelude to a deep recession around the world, Germany and France also plunged to record lows.

Activity in Japan’s service sector also dropped by the most since its PMI records began. Economists warned that the reading was especially worrying given that, apart from school closures, there had been no major European-style lockdowns put in place, indicating that the collapse in activity in Europe could worsen over the coming weeks.

Chris Williamson, chief business economist at IHS Markit, said the virus-fighting lockdowns meant the US economy, the world’s biggest, was probably already in a recession. “Jobs are already being slashed at a pace not witnessed since the global financial crisis,” he added.

Despite the worsening economic outlook stock markets rallied on Tuesday to halt a plunge in recent weeks, as hopes mount for greater coordination between the world’s biggest economic superpowers and Congress in Washington inched towards agreeing a bipartisan deal on a stimulus plan. There are also hopes of a boost for economic activity in China, where there are plans to lift travel restrictions in the central Hubei province where the Covid-19 outbreak originated late last year.