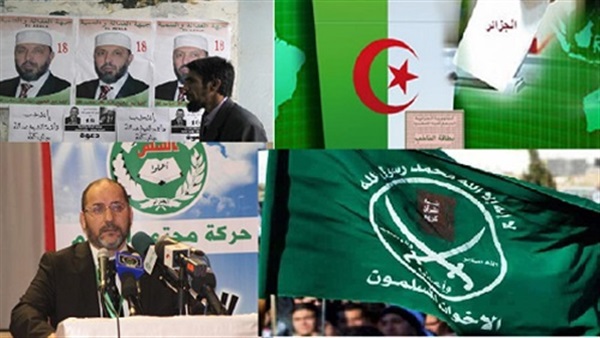 Stages of Brotherhood change of stances in Algeria after presidential elections

Opportunism of the Brotherhood as usual in Algeria has not stopped since the last presidential elections, which clearly demonstrated the Brotherhood’s attempts to play on the trump card to control the reins of affairs in the country.

The group has found early that the elected president is expected to be the winner due to his popularity. As early as February 22, 2019, the group demanded that the late President Abdelaziz Bouteflika do not run for a fifth term.

The group and its Hamas party, headed by Abdel-Razek Mekri, also differed from the current popular movement, and sometimes they appeared in support of the movement, and at other times warned against it, in an attempt to get closer to the Algerian President Abdel Majid Tebboune.

Presidentials and ambiguity of positions

Since the end of the fourth term of the late President Bouteflika, the positions of the Hamas Brotherhood movement in Algeria seemed to be fluctuating and unclear, sometimes by declaring non-participation in the elections, and again by pushing Mekri, the head of the movement in the electoral race, and again by withdrawal, and all positions come according to the calculations of the current situation.

In the April 2019 elections, the group, represented in the Peace Society Movement, known as Hamas, announced that it would not have a candidate but then it nominated Makri. It announced that it had collected 60,000 signatures for that, as it launched its electoral program titled “The Algerian Dream” and 24 hours before the candidacy closed, the movement’s Shura Council decided to withdraw from the presidential elections.

The voters justified the withdrawal at the time, that it came “in line with the desire of the people, who came out in the millions of anti-nominations of President Bouteflika”.

The group’s position in the Hamas movement towards the presidential elections in December 2019 seemed mixed and looking for the most benefits, and the movement’s speech remained incomprehensible. Will you participate in the elections or not?

The movement seeks to gain the friendliness of the movement, and at the same time it tries to appear in a form that respects democracy in the country, with the aim of searching for a foothold in the future, for those who will reach the presidency, at least, to obtain some ministerial portfolios.

Hours before the candidacy was closed, the movement announced that it would not participate in the presidential elections, after members of the National Shura Council rejected Khosmar Ghammar of this presidential entitlement.

After the Algerian President Abdelmadjid Tebboune’s approach to achieve a kind of stability in the state’s institutions, amid continuous popular protests, since the beginning of 2019, and its continuation after the presidential elections that took place in December 2019, which Tebboune won, the movement recently sensed that the balance of scales is in favor of the president-elect, and began to seek to exploit any situation that brings it closer to Tebboune.

In its statement issued on Sunday 16 March 2020, the movement demanded the suspension of the popular movement due to coronavirus epidemic, demanding the suspension of flights to and from outside Algeria, especially towards the endemic areas, and the cancellation of all official and private cultural and sports gatherings and activities.