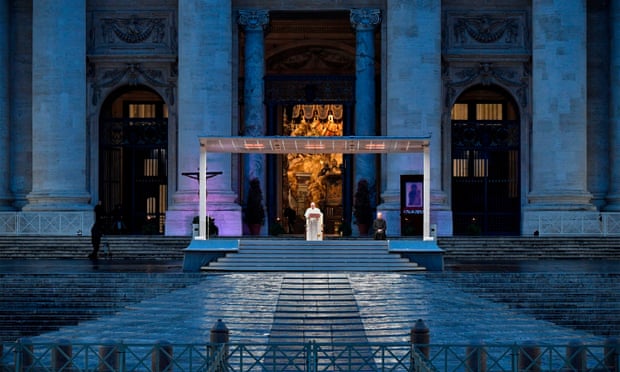 The pope’s blessing, Urbi et Orbi (To the city and the world)is usually reserved for Christmas Day and Easter Sunday, with thousands flocking to take part.

Images of the cloudy sky and the glistening square on Saturday, with the pope, alone, praying upon a platform illuminated by the faint light of six candelabras, travelled the world over. “For weeks now it has been evening,” he said. “Thick darkness has gathered over our squares, our streets and our cities; it has taken over our lives.”

“The pandemic has reminded us that we are all in the same boat,” he added. “The storm exposes our vulnerability and uncovers those false and superfluous certainties around which we have constructed our daily schedules.”

The hour-long blessing, which started at 6pm on Friday, was punctuated by moments of dramatic silence with the pope, standing, intent on praying, behind the famous “Miraculous Crucifix”, a wooden cross kept in the Church of Saint Marcellus which, according to devout Roman Catholics, saved Rome from the plague in 1522.

According to official data from the broadcasting groups Rai, Sky and TV2000, the event was viewed by more than 11 million people. Since the outbreak of the coronavirus emergency in Italy, the number of viewers of live broadcasts of the pope’s prayers has increased, in part because the government’s stringent measures to halt the spread of coronavirus include the cessation of all masses, funerals and weddings.

On Friday, Italy recorded its single biggest leap in coronavirus deaths, announcing that 969 people had died from Covid-19 in the previous 24 hours.

The country also became the second country to overtake China in terms of the number of infections, reaching 86,498 cases. That included 66,414 current infections, up 4,401 from Thursday.

Conte warned on Saturday that the European Union could lose its purpose if it failed to come up with a strong response to the coronavirus threat and accused other member states of a timid response to an unprecedented economic shock.

Pope Francis can be seen at the very bottom of this image of St Peter’s Square. Photograph: Vatican Media/AFP via Getty Images

Meeting via a video-link, Conte aired his grievances after the 27 EU leaders could not agree on an action plan during an argumentative six-hour video conference on Thursday and gave their finance ministers two more weeks to forge a policy that could please Italy and Spain.

“If Europe does not rise to this unprecedented challenge, the whole European structure loses its raison d’être to the people,” Conte told Saturday’s edition of the Il Sole 24 Ore financial newspaper.

“We are at a critical point in European history,” Conte added, “I represent a country that is suffering a lot and I cannot afford to procrastinate.”

Rome and Madrid want the EU to start issuing “corona bonds” – a form of common debt that governments sell on markets to raise money and address individual economic needs. But nations such as Germany and the Netherlands are balking at the idea of joint debt.