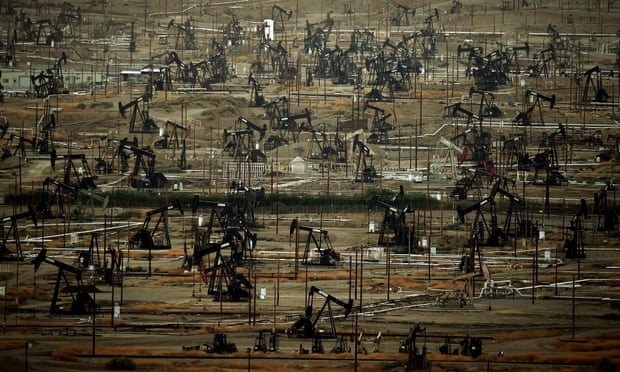 Global oil producers have begun shutting down their oil rigs on the largest scale in 35 years as the coronavirus continues to drive market prices to their lowest level since 2002.

The shutdown of oil wells has already wiped out almost 1m barrels a day from global production, but the figure is expected to rise as producers run out of space to store their extra oil as the crisis continues.

In some landlocked markets in the US, where storage space is scarce and shipping costs are high, oil producers started oil well “shut-ins” late last week rather than pay buyers to take their barrels.

In Canada the price of a barrel of oil fell below the cost of shipping it to a refinery – $5 – making it more economic for producers to shut down their wells than plummet to “negative prices”.

The international oil price benchmark, Brent crude, has fallen to its lowest level in 18 years, at below $23 a barrel. The latest price plunge came after Saudi Arabia denied it was in talks with Russia over a truce in the oil price war which earlier this month triggered the fastest oil price crash since 1991.

The major oil companies are preparing to pump record levels of oil into the global market as part of a bitter oil price war to win a stranglehold on the market, despite plummeting demand for energy during the Covid-19 economic crisis.

The US banking group Goldman Sachs said oil well shut-ins had reached at least 900,000 barrels of oil a day, but “the true number [is] likely higher and growing by the hour”.

“Given the cost of shutting down a well, a producer would be willing to pay someone to dispose of a barrel, implying negative pricing in landlocked areas,” the bank said in an investor note on Monday.

Jeffery Currie, the global head of commodities at Goldman Sachs, said the mothballed oil wells may fail to restart as quickly as the economy recovered from the “coronacrisis”, or at all, which could trigger “a very quick risk reversal towards oil shortages” and cause oil prices to more than double again by next year.

If you have been affected or have any information, we’d like to hear from you. You can get in touch by filling in the form below, anonymously if you wish or contact us via WhatsApp by clicking here or adding the contact +44(0)7867825056. Only the Guardian can see your contributions and one of our journalists may contact you to discuss further.

“Not only is this the largest economic shock of our lifetimes, but carbon-based industries like oil sit in the cross-hairs,” he said. “Accordingly, oil has been disproportionately hit.”

Goldman Sachs estimates that global oil demand has fallen 25% in the wake of the coronavirus outbreak and the price of Brent crude could fall to lows of $20 a barrel. Saudi Arabia will begin pumping record levels of crude from April.