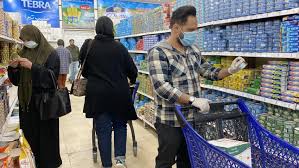 The health minister of the UN-recognized government in Libya announced the first patient infected to Covid-19 late on Tuesday.

After the overthrow of Libyan dictator, Muammar Qaddafi, the country is divided between two warring sides. The Tripoli-based Government of National Unity (GNA) and forces loyal to eastern-based military strongman Khalifa Haftar.

With two groups trying to take control over the country, experts warn that containing spread of coronavirus pandemic will very challenging.

“The necessary measures have been taken to treat the patient,” said minister Ehmed Ben Omar.

In a show of unity – and despite the pandemic cancelling parades that would normally be the highlight of the day – Greek politicians have marked the 199th anniversary of the nation’s war of independence against Ottoman rule in a ceremony that will forever be remembered for brevity and social distancing, writes my colleague Helena Smith in Athens.

After laying a wreath before the tomb of the unknown soldier at the foot of the Greek parliament in Syntagma Square and listening to a wind-swept rendition of the national anthem – played by a band in an otherwise empty plaza – the country’s newly installed president, Katerina Sakellaropoulou, greeted the political party leaders, lined up a meter or so apart, with a smile and a nod.

As of Monday, Greece has been, with few exceptions, in full lockdown as authorities enforce draconian measures to curb the spread of coronavirus. Nationwide, the streets of cities are empty. To date, the health ministry has announced 743 confirmed cases and 20 deaths attributed to Covid-19. A total of 134 people have been hospitalised with 45 in intensive care although figures are likely to rise.

“This year the national anniversary finds our country in an unprecedented situation. We are not celebrating it in streets and squares but we are honouring it in our homes,” prime minister Kyriakos Mitsotakis said in a “message” to the nation. “The enemy, now, is the pandemic and against it we will parade our strength and unity …. our battle now is one: to keep Greece strong and Greeks healthy. The pandemic will cost us but we will emerge victorious and more mature.”

Usually a barrage of fighter jets and other aircraft participate in the fly-past but today social distancing prevailed even in the air with four mirage fighter jets and six helicopters swooping over the Acropolis and central Athens at a safe distance from one another. Two F-16’s later flew over the Evros land border Greece shares with Turkey – the site of chaotic scenes earlier this month when Ankara announced it was “opening the gates” to Europe for tens of thousands of migrants and refugees – and the eastern Aegean islands of Samos, Lesbos and Chios where the vast majority of some 42,000 men, women and children are currently living in camps also in lockdown as a result of the novel virus.