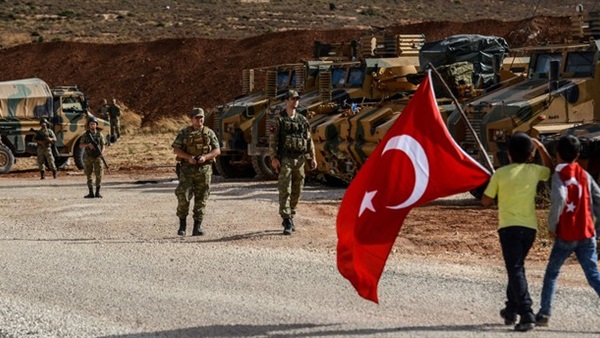 Language of interests: US signals standing by Turkey in Idlib

Despite US criticisms leveled at Turkey over its interference in northern Syria and its conflict with the Syrian army to remain in Idlib, the United States is now taking a different approach, having expressed its support for Ankara more than once.

On March 2, US Secretary of State Mike Pompeo expressed his country’s support for Turkey after its surveillance site was attacked by Syria with mortars.

US Special Representative for Syria James Jeffrey confirmed in a press statement on Tuesday, March 10 that the United States is studying ways to support Turkey in Syria, stressing that “all options are on the table.” He added that if Russia and the Syrian government violate the ceasefire, then the United States and its European allies will respond quickly with measures and possibly sanctions.

It seems that the United States wants to support Turkey in order to preserve the common interests between the two countries.

In October 2019, Washington warned Ankara against drilling for gas in the eastern Mediterranean but only dealt with the issue through diplomacy and messages, without concrete sanctions.

Aykan Erdemir, a researcher at the Foundation for Defense of Democracies (FDD), justifies Washington’s dealings with Ankara due to the United States relying on Turkey’s Incirlik air base, which Ankara has often threatened to close if Washington imposes any sanctions on it.

During Turkey’s Afrin offensive in early 2018, Abdulkadir Selvi, a journalist known for being close to the regime of Turkish President Recep Tayyip Erdogan, was quoted by Orient News as saying that the Incirlik and Kurecik military bases were being used by Ankara as a card against Washington, which contributed to alleviating the US objection to Turkey’s offensive in northern Syria against the Kurdish People’s Protection Units (YPG).

There was not much difference when Erdogan invaded northern Syria again in October 2019 through Operation Peace Spring after the United States withdrew from the region and left its Kurdish allies to confront Ankara on their own.

After the Afrin operation, General Joseph Votel, commander of US Central Command at the time, admitted that Turkey had informed Washington about the military operation, noting that the United States is not especially concerned about that area, as it does not fall within the scope of US military operations.

On the other hand, the issue of Syrian oil comes as a major reason for Washington standing by Ankara, especially after Erdogan announced on March 11 that he had offered Russian President Vladimir Putin to share the management of oil fields in Deir Ezzor in northeastern Syria, which is currently under Kurdish administration.

Erdogan’s request is in line with the policy of US President Donald Trump, who has declared his desire to permanently remove the Kurdish YPG units from the oil fields so that they do not fall into the hands of ISIS.

On November 27, 2019, Trump announced that he intended to conclude a deal with Exxon Mobil to go to Syria to control the oil fields and distribute the oil wealth properly, noting that protecting oil wells denies ISIS the ability to return.

Perhaps the US position towards Turkey at this time in particular is greatly related to Syrian oil, especially since Russia accused the United States of practicing “theft” on a global level in Syria’s oil fields.

On October 26, 2019, Moscow confirmed that the Kurdish fighters are the main reason for recovering the oil fields from ISIS, adding that no oil fields located in Syria belong to ISIS terrorists or the Americans, but rather they belong to Syria.