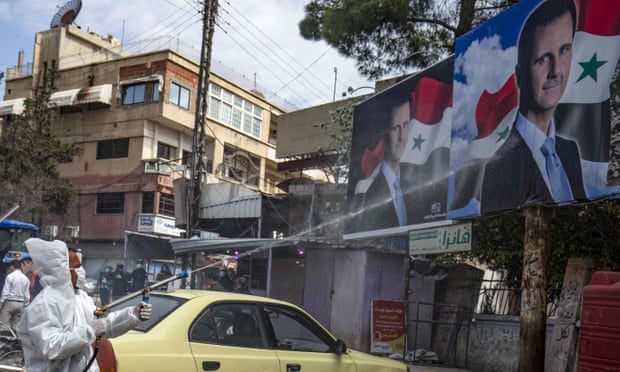 Several members of Islamic State have escaped from prison after militants sparked a riot and seized control of part of a large jail in north-east Syria, Kurdish and US military sources have said.

Prisoners broke down walls and tore off internal doors during the unrest on Sunday night at Ghouiran prison in the city of Hasakah, overwhelming guards from the Syrian Democratic Forces (SDF), Washington’s Kurdish-led ground partner in the fight against Isis.

Inmates seized the ground floor and entered the prison courtyard, from where at least four men are believed to have left the facility. Unconfirmed reports said several people had died in the violence.

Local security services remained on high alert on Monday, with prisoners still in control of some sections of the complex. Ivan Hassib, a local journalist, posted a video from outside the jail of dozens of SDF soldiers stationed outside the perimeter and on the roof of the large facility.

“The situation is still tense inside the prison,” SDF spokesperson Mustafa Bali said on Twitter, adding that reinforcements were on the way to try to regain control.

Aircraft from the US-led coalition against Isis assisted in searches overnight and into Monday morning, according to military spokesperson Col Myles Caggins III.

Local media said on Monday that four men had been successfully recaptured. There was no immediate confirmation of the total number of escapees or recaptured prisoners from the SDF or coalition.

The Rojava Information Centre said Ghourian prison holds 3,000-5,000 people, many of whom are foreign nationals suspected of travelling to Syria to join the now-defunct “caliphate”. Only “low-level” prisoners were housed at the facility, US coalition spokesperson Caggins added.

Isis lost control of its last territory in Syria a year ago after a five-year-long ground and air campaign by the US-led coalition. The SDF says it is still holding 12,000 fighters in overcrowded prisons across its territory in northeast Syria, along with about 100,000 women and children in squalid detention camps.

Up to 4,000 male prisoners are foreigners from almost 50 countries. An estimated 60 British children are still in the area.

In October last year, Turkey made good on a long-standing threat to attack the Kurdish-led forces across the border that Ankara views as terrorists. In the ensuing chaos, 249 women and 700 children with links to Isis walked out of a secure annex at Ain Issa camp after guards abandoned their posts after Turkish shelling.

The Kurdish authorities have repeatedly called on the international community to repatriate citizens, warning they do not have the resources to house Isis suspects indefinitely. Years of stonewalling from western governments, however, has led the Kurds to suggest foreign nationals could be tried in the Kurdish administration’s courts.

Human Rights Watch and other groups say many inmates in male prisons are children or were arrested on flimsy charges, echoing similar concerns over the processing of Isis suspects over the border in Iraq.