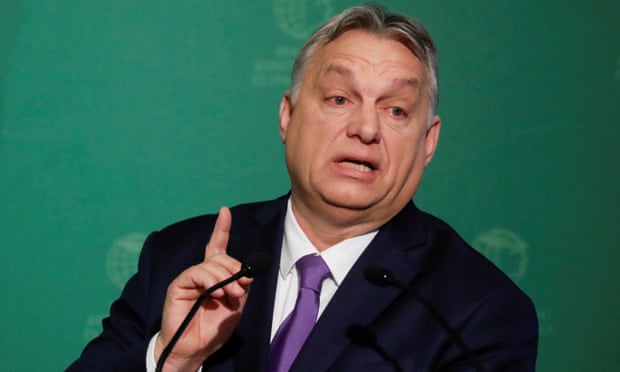 Hungary is set to pass a new law on coronavirus that includes jail terms for spreading misinformation as critics warn that the nationalist prime minister Viktor Orbán could be given carte blanche to rule by decree, with no clear time limit.

Hungary’s parliament, in which Orbán’s Fidesz party has a two-thirds majority, looks set to pass the bill on Monday in spite of opposition from other political parties, who had demanded a time limit or sunset clause on the legislation.

As of Sunday morning, Hungary had 408 confirmed cases of coronavirus and 13 deaths, although the real figures are likely to be higher. The country is under a partial lockdown, with people discouraged from going outside except for essential activities, and schools, restaurants and many shops closed.

Rights groups and government critics say that while it is clear coronavirus brings extraordinary challenges, some checks and balances should be placed on the government response, especially given Orbán’s erosion of democratic norms during his 10 years in power.

“This bill would create an indefinite and uncontrolled state of emergency and give Viktor Orbán and his government carte blanche to restrict human rights,” said David Vig, Amnesty International’s Hungary director. “This is not the way to address the very real crisis that has been caused by the Covid-19 pandemic.”

The government tried to pass the bill last week, but would have needed four-fifths of MPs to vote on it. Hungary’s liberal opposition said that although it had concerns over a number of elements of the law, it was willing to overlook them in the spirit of compromise as long as a sunset clause was introduced.

“Of course we support the emergency situation. We agree with the government that there’s an emergency and that they have to do everything to combat it. We offered almost everything, but we asked for the time limit,” said Ágnes Vadai, an MP with the opposition democratic coalition.

However, the ruling party had made it clear that it was not willing to back down over the sunset clause, she claimed. “I think from the very beginning, they didn’t want an agreement, because they have used the whole thing for political communication,” said Vadai, referencing claims that the opposition’s stance had been “unpatriotic” and was aiding the spread of coronavirus.

Orbán’s government has fiercely defended the measures. “I assure every Hungarian citizen that everything the government is doing is in relation to fighting the coronavirus and protecting the citizens’ life and health,” said Judit Varga, the justice minister, on Friday.

If you have been affected or have any information, we’d like to hear from you. You can get in touch by filling in the form below, anonymously if you wish or contact us via WhatsApp by clicking here or adding the contact +44(0)7867825056. Only the Guardian can see your contributions and one of our journalists may contact you to discuss further.

Varga said the new criminal provision was “both adequate and necessary in order to fight malicious disinformation campaigns” against Hungary. This is unlikely to quell fears that the bill could be used to target critical reporting of the government’s response to the pandemic, given that top Hungarian government figures frequently claim that independent Hungarian journalists and foreign media are engaged in a deliberate plot to smear the Orbán government. Varga clarified that the law would apply to everyone, including journalists.

She pointed out that parliament could end the emergency situation at any time, as long as it is still sitting. However, Fidesz controls parliament and is unlikely to cancel the legislation without Orbán’s say-so. The lack of an end date was because it is unclear when the pandemic would end, she said. Asked who would decide when it could be declared over, she said: “Life will give the answer to this. I’m not a doctor, I’m not a scientist, but I think it will be crystal clear for everyone in Europe when the crisis is over.”