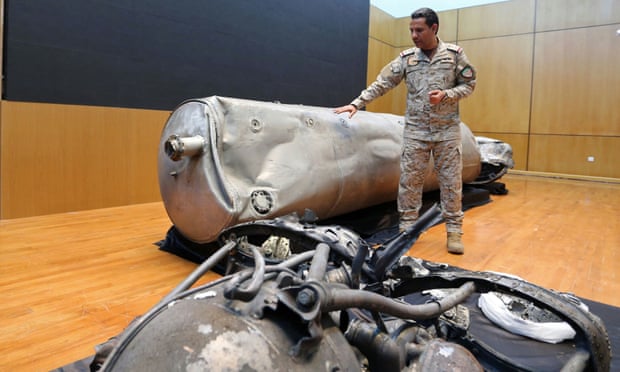 The attacks, which were intercepted by Saudi air defences, came days after Yemen’s warring parties welcomed a UN call for an immediate truce to fight the coronavirus outbreak.

“Two civilians were slightly injured due to the falling of the intercepted missile’s debris as it exploded in mid-air over residential districts [in Riyadh],” Lt Col Mohammed al-Hammadi, a Saudi civil defence spokesman, told the Saudi state news agency SPA.

Shrapnel also fell on the south-western city of Jazan, located on the Red Sea, north of the border with Yemen, SPA said, citing a spokesman for the Saudi-led coalition fighting Houthis in Yemen, Col Turki al-Malki.

The Houthi news outlet Al Masirah has reported a number of coalition air attacks over the past two days on Houthi-held territory.

The Saudi-led coalition on Friday said it had also intercepted and destroyed drones launched towards the Saudi cities of Abha and Khamis Mushait.

A Houthi military spokesman said on Sunday the group’s forces had launched rockets and drones at “sensitive” sites in Riyadh and at economic and military sites in Jazan, Najran and Asir, near the Yemen border.

Yahya Saria said Zulfiqar missiles and Samad 3 drones were fired at Riyadh, and other drones and missiles were launched at the southern areas. Saria warned of further “painful operations” against Saudi Arabia if aggression against Yemen continued.

Yemen’s Houthi forces have launched hundreds of missiles and drones across the border, mostly at nearby military and civilian targets but also at Riyadh. The last attempted strike on the capital was in June 2018.

Yemen has been mired in conflict since Houthi rebels ousted the government from power in the capital, Sana’a, in late 2014. A Saudi-led coalition of 20 Arab nations intervened in early 2015 to try to restore the government. Houthi forces still control most major urban centres.

The five-year civil war has left more than 100,000 people dead, most of them civilians, according to relief organisations, and 3.6 million displaced in what the UN has called the worst humanitarian crisis in the world.

Malki said the missile attacks, which he blamed on Houthi rebels and Iranian Revolutionary Guards, showed the real threat posed by the group and the Iranian regime supporting it. Malki added that this escalation did not reflect the group’s announcement that it was welcoming a ceasefire.