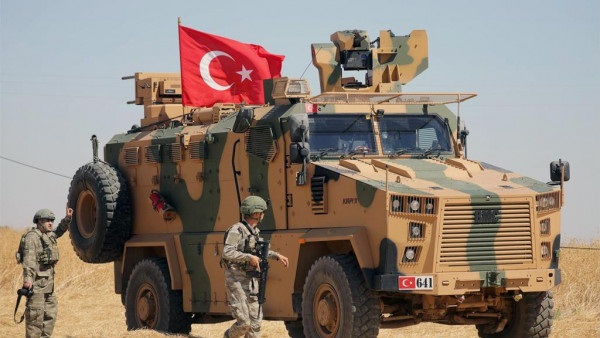 The COVID-19 disease will apparently put an end to Turkish military presence in northern Syria. Three Turkish soldiers deployed in northern Syria tested positive for the disease recently, after showing symptoms of acute flu, according to media reports.

The three soldiers were quarantined in Turkey, the Turkish site Grihat said.

It added that COVID-19 is also spreading among the members of the militias backed by Turkey in northern Syria. The site noted that these militia members contracted the disease from the Turkish troops.

COVID-19 is present on a large scale in the refugee tents set up along the Syrian-Turkish border, Maarouf told The Reference.

He revealed that a man died from the disease a week ago in the border area.

The refugees live in this area, Maarouf said, in the absence of any medical support.

This makes the spread of the disease an easy matter in this area, Maarouf said.

He noted that the Turkish troops guarding the refugee camps are prone to infection. He added that Turkish authorities are hiding a lot of information in this regard, lest they should cause fear among Turkish troops.

Tahrir al-Sham, one of the largest factions fighting the Syrian army in northern Syria, said it would take special preventive measures to prevent an outbreak of COVID-19.

It said the measures would include reducing the number of its members in the border area where Turkish troops are deployed.

Abdel Khabir Atta, a political science professor at Assuit University, said Erdogan would have to either pull his troops out of Syria, or leave them behind to face death because of COVID-19.

The presence of infections among the Turkish troops in Idlib will spread anger among Turkish citizens, Atta said. This means that the Turkish president will face a major crisis in the coming days.